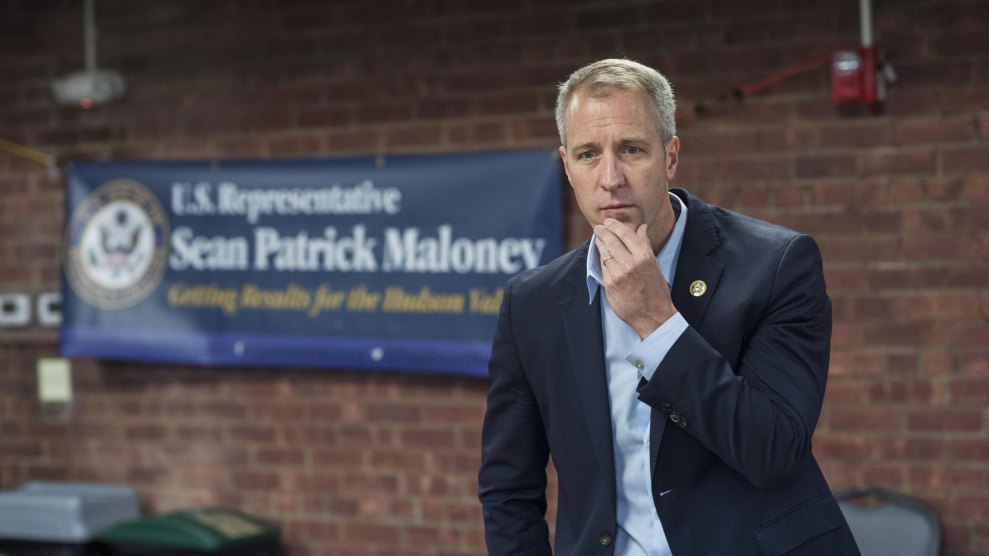 Democrats got some good news on Tuesday in California, where they appear to have averted a much-hyped disaster and secured spots on the ballot in four Republican-held congressional districts. But in New York—the California of the East!—their outlook got a little bit more clouded. That’s because Rep. Sean Patrick Maloney, a third term Democrat in a district won by President Donald Trump, announced that he would run to replace former Attorney General Eric Schneiderman, who resigned last month following allegations of sexual abuse.

Maloney, the first openly gay congressman in New York state, is a rising star in Democratic politics who was responsible for drafting the Democratic Congressional Campaign Committee’s 2016 autopsy report and even entertained running the DCCC himself. By entering the AG race, he joined a field that includes Letitia James, the New York City public advocate, and Zephyr Teachout, a Fordham law professor and lefty favorite who was the party’s 2016 nominee in a congressional district that neighbors the one Maloney represents.

But Maloney isn’t dropping his House re-election campaign to run for the attorney general job, and that’s where things get complicated. New York has one of the most convoluted election systems in the country, part of which entails holding primaries for federal and state offices on separate days. The attorney general primary is in September and the congressional primary is in June.

Maloney intends to run in both races for now, but has said he’ll give up the congressional nomination if he wins the attorney general primary. Except it’s not clear that he can actually do that. New York law bars candidates from running for two seats at the same time—the fact that the primaries are on different dates, he believes, is a loophole. But a Democratic House colleague, Rep. Kathleen Rice, specifically cited “the current state law prohibiting candidates from seeking two offices simultaneously” in explaining last month why she wouldn’t run for AG.

Maloney has the time (and the lawyers) to work that out, and the filing deadline for the statewide races isn’t for another month. But what happens if he wins both primaries? That’s where things get dicier for Democrats, who may not have much margin for error in their quest to take back the House.

Although 2018 is expected to be a good year for House Democrats, Maloney’s district has been extremely competitive in two of the previous three campaigns. He unseated Republican Rep. Nan Hayworth in 2012 by less than four points, then won a rematch two years later by 3,333 votes. Maloney won more comfortably in 2016, but the district swung sharply to the right—his was one of 18 districts Obama carried twice that went for Trump. In February, Maloney was named to the National Republican Congressional Committee’s target list. With Maloney in the race, the Cook Political Report rated the seat as solidly Democratic. If he were to drop out in September, a Democratic replacement would only have seven weeks to build a winning campaign in a swing district, with neither the fundraising or name recognition of the incumbent.

Maloney told Roll Call on Wednesday that everything will be okay. “I’ve been talking to Democratic leadership and what I can tell you is we’ll have a plan in place to keep the seat if I win the attorney general nomination,” he said. So far, any plan remains secret, and the path for Democrats to hold onto that seat might get a lot more challenging than it appeared last month.