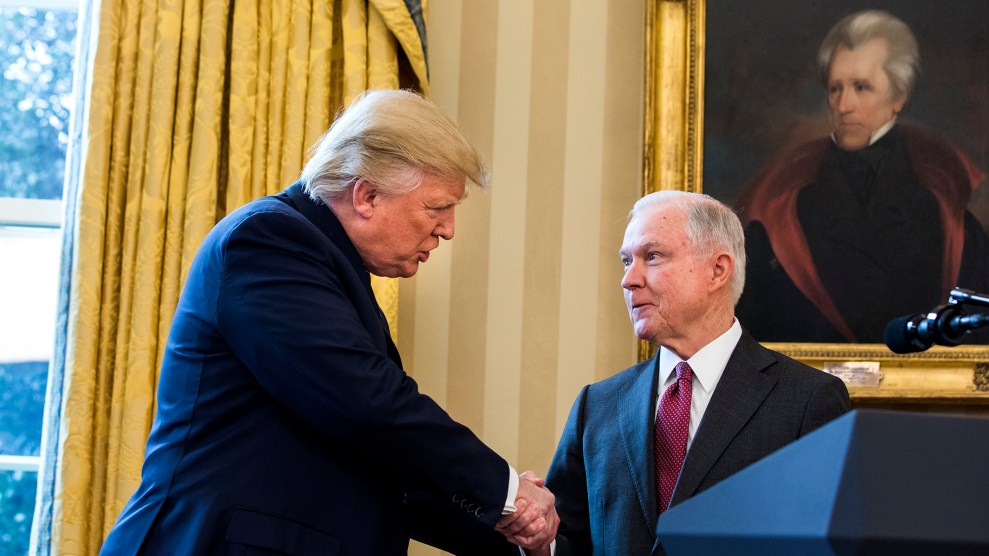 One day after the Supreme Court upheld voter purging in Ohio, the Justice Department decided to get in on the action. The department sued the state of Kentucky on Tuesday to force it to “systematically remove the names of ineligible voters from the registration records”—and Kentucky quickly agreed to comply.

The lawsuit, filed in conjunction with the conservative group Judicial Watch, alleges that Kentucky has not made “a reasonable effort to remove registrants who have become ineligible due to a change of residence.” Judicial Watch first sued Kentucky in November 2017, and the Justice Department announced it was joining the lawsuit on Tuesday. That same day, Kentucky settled the lawsuit and said it would make “a reasonable effort to remove from the statewide voter registration list the names of registrants who have become ineligible.”

This is the Trump administration’s first lawsuit against a state to force aggressive voter voter purging and could be the beginning of a new effort to curb voting rights. In June 2017—on the same day that President Donald Trump’s controversial Election Integrity Commission asked states to hand over sensitive voter data— the Justice Department sent a letter to 44 states informing them it was reviewing their voter list maintenance procedures and asking how they planned to “remove the names of ineligible voters.” Vanita Gupta, who led the Justice Department’s Civil Rights Division under President Barack Obama, called the letter “virtually unprecedented” and predicted it would lead to new voter purges.

That is happening now. The Justice Department lawsuit was filed against Kentucky’s Democratic secretary of state, Alison Lundergan Grimes, who last year vocally denounced a different Trump administration request, for voter data from all 50 states. She said at the time, “There’s not enough bourbon here in Kentucky to make this request seem sensible.”

The Trump administration sued Kentucky under the National Voter Registration Act of 1993, which was supposed to make voter registration more accessible by allowing people to sign up to vote at motor vehicle offices and other public agencies. The law also contained a provision requiring states to make a “reasonable effort” remove ineligible voters from the rolls. The George W.Bush administration sued four states under this list maintenance provision to force them to purge ineligible voters. This voter purge strategy has been expanded by conservative activists in recent years, who have sued or threatened to sue 11 states where they claim the voter rolls are inflated.

If not done with proper safeguards, voter purges can cause eligible voters to be removed from the rolls. In 2006, a state court in Kentucky blocked an effort by then-Secretary of State Trey Grayson, a Republican, to purge the voter rolls, finding that more than 8,100 eligible Kentucky voters had been removed.

Wrongful purging has swung close elections in Republicans’ favor. This happened most notably during the 2000 election in Florida, when the state wrongly labeled 12,000 eligible voters as ex-felons and purged them from the voter rolls. That was 22 times Bush’s 537-vote margin of victory over Al Gore.

In addition to the Justice Department’s lawsuit against Kentucky, Republicans have already sought to use the Supreme Court’s Ohio decision to their advantage in other ways. On Wednesday, Kansas Secretary of State Kris Kobach, the former vice chair of the now-defunct Election Integrity Commission, took to federal court to try to reinstate a Kansas law requiring proof of citizenship to register to vote. The law blocked one in seven eligible voters who attempted to register and was put on hold by the courts.