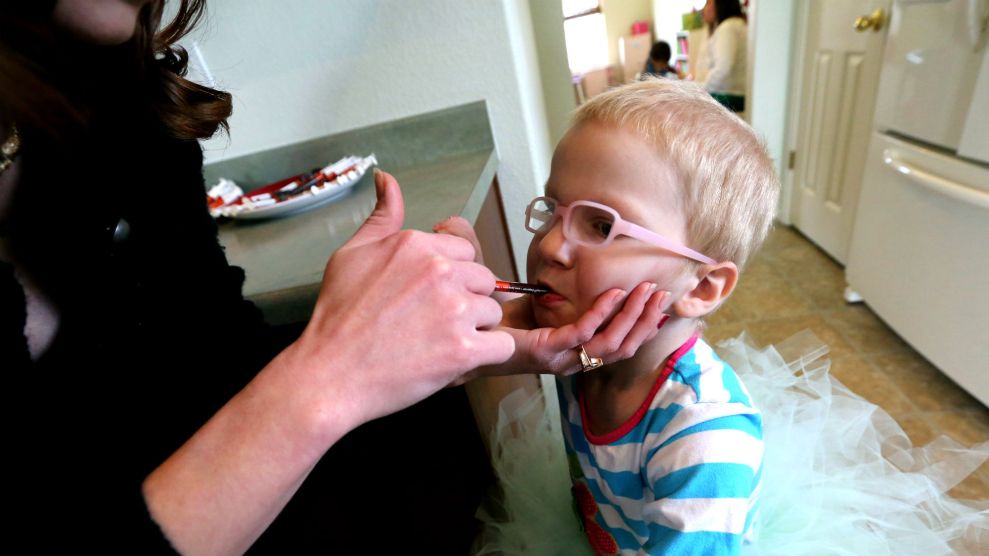 Just after his fifth birthday, Quintin Lovato had his first seizure. Two days later, another. Later that year, he was diagnosed with epilepsy. Then, at age seven, the Tourette’s came. To treat his symptoms, his parents, Hannah and Ron, tried a variety of pharmaceuticals, each with nasty side effects—anger, aggression, and social withdrawal—before ultimately finding the answer: medical marijuana.

Fortunately for the Lovato family, cannabis is legal in their home state of Colorado. Quintin’s treatment, an oil made with CBD—a nonpsychoactive molecule found in marijuana—was life-changing for him and his family. “Within three weeks, I saw my son’s seizures start to go away, but more acutely important is that his Tourette’s ticks were almost gone,” Hannah tells Mother Jones. A year later, he was living a normal life; a big Rockies fan, he even joined a competitive baseball league.

There is just one problem: Quintin’s medicine needs to be administered orally, under the tongue, three times daily. So, with five kids and full-time jobs, getting to school every day to meet Quintin and administer his medicine isn’t easy for Hannah and Ron. “It’s just not a realistic thing for most families,” Hannah says. And, it’s tough on Quintin, who, like most kids, doesn’t want his mother showing up in the middle of every school day. “It makes me feel like I’m not that fun because my mom comes to school,” Quintin says.

For the first time, that could all change under a new Colorado law, appropriately nicknamed “Quintin’s Amendment,” in honor of the third-grader, who helped advocate the law himself. Earlier this month, Colorado Gov. John Hickenlooper signed House Bill 18-1286, which allows school nurses or other school officials to treat students who have a prescription with “non-smokeable” cannabis on their school’s campus. The law builds upon older legislation from 2016, “Jack’s Law,” which permitted marijuana on school campuses for medical reasons, but only if administered by a parent, like Hannah.

If the federal government wants to come after sick kids…If that’s where they want to put their stake in the ground in this drug war, they’ve got a huge fight on their hands.

The new law is the first of its kind, according to Colorado lawmakers. While medical marijuana is legal in more than half of the United States—and across the country, thousands of children use it to treat pain, anxiety, symptoms of epilepsy or multiple sclerosis, and other diseases—only a few states, including Maine and New Jersey, have passed legislation to allow medical cannabis in schools. Colorado, the lawmakers say, is now the first to allow its school system to administer cannabis.

But putting the law into practice isn’t exactly simple. Quintin’s Amendment only gives schools the option to administer medical cannabis; it enables schools and nurses to opt-out of the policy if they so choose. There of course could be a variety of reasons why they might opt out, but one of the key issues at play is the fact that cannabis is still a Schedule I drug under federal law, so Colorado lawmakers expect some administrations to resist this new policy due to fears that Uncle Sam will revoke federal funding. Under the Every Student Succeeds Act of 2015, for instance, Colorado schools received more than $175 million in federal funding during the 2017-18 school year. And some administrators also worry that school nurses could lose their licenses.

“We did get some pushback from nurses and schools,” freshman Rep. Dylan Roberts (D-Eagle), one of the bill’s sponsors, tells Mother Jones. “But we worked with them really closely to make this bill as accessible to them as possible.” That’s why, he notes, the law is nonobligatory.

What’s more, educators have rejected medicinal cannabis in the past. When Jack’s Law first hit the books in 2015, many Colorado schools and nurses refused to allow medical cannabis onsite, even administered by parents, due to fears that the federal government would revoke funds—forcing lawmakers to write new legislation in 2016 making compliance mandatory, according to Rep. Jonathan Singer (D-Boulder), one of the law’s sponsors. “Both in 2015 and 2016, the Colorado Association of School Boards, which represents the majority of school districts in the state, opposed the bill,” Singer tells Mother Jones. “Basically, their argument was, if they were to engage or even allow for any federally illegally activity to occur on school grounds, they would be potentially incurring a federal violation that might put their federal funds at risk.”

Those fears are justified, argues Colorado’s Education Department, whose board opposed the bill. “Schools and nurses in Colorado are most certainly at risk of violating federal law by following this policy,” Jeremy Meyer, the director of communications for the Colorado Department of Education, tells Mother Jones in an email.

The Colorado Association of School Nurses echoed this sentiment in a statement earlier this year about Quintin’s Amendment. “Registered Nurses are required to follow all federal laws with respect to the medications we administer,” the statement reads. “Violating these requirements would put Registered Nurses at risk of losing their licenses. This could leave the school nurse and district open to federal investigation, potentially impacting federal funding.”

That’s why, in other states like Maine and New Jersey, laws grant only parents and guardians the right to administer cannabis at school.

Even still, the likelihood of the Trump administration getting involved is probably slim, and the bill’s sponsors are skeptical it would. While Attorney General Jeff Sessions hasn’t said much specifically about prosecuting school officials, he has signaled an intention to crack down on cannabis—rolling back Obama-era sentencing guidelines for cannabis convictions and directing all US attorneys to “enforce the laws enacted by Congress and to follow well-established principles when pursuing prosecutions related to marijuana activities.” But a battle over state cannabis in Colorado would be a legal nightmare for Sessions, and Trump himself has promised to stay out of states’ cannabis industries.

[Medical marijuana] is really changing people’s lives in a positive way and I think state legislators should step up and make this a reality for a lot more of our kids.

“If the attorney general and the Justice Department wanted to come into Colorado and start prosecuting doctors and nurses and take away money from elementary schools, then they’d have the power to do that, but there is no evidence that they have the resources or are wanting to do that at this time,” Roberts says.

And even if Sessions were to crack down on federally illegal activities in Colorado, kids with seizures probably wouldn’t be his first target, says Singer. “To be blunt about it—and excuse the pun—if the federal government wants to come after sick kids…If that’s where they want to put their stake in the ground in this drug war, they’ve got a huge fight on their hands,” he says.

It’s for now unclear how many Colorado schools will refuse the marijuana medication policy, as the law just went into effect and schools have closed for summer. In the 178 school districts in Colorado, about 300 kids need medical marijuana and most of the state’s schools receive some form of federal funding (though it is impossible to know how many would need treatment during the day).

The chief financial officer for Denver Public Schools, Mark Ferrandino, told Mother Jones in an email that Denver is waiting for a directive from the State Board of Education before making any new policies. “We will want to see their action before taking any action at the district level,” he said.

Colorado’s Mesa County school district, on the other hand, has already said it plans on enacting a policy that will not permit school personnel to administer marijuana. Administrators said in a statement to Colorado’s KREX5 News earlier this month, “[Quintin’s Amendment] allows but does not require districts to change their policies, and we wish to honor the concerns of our nursing license-holders who are uncertain about potential repercussions at the federal level if they administer medical marijuana to students.”

Either way, Colorado will likely prove a model for other states, especially as the FDA is poised to approve the country’s first-ever legal CBD treatment before the end of the month. And some states already have legislation similar to Jack’s Law and Quintin’s Amendment coming down the pike, including California’s SB-1127, which would allow cannabis in schools to be administered by a parent. Illinois’ HB-4870, or “Ashley’s Law,” would also allow parents to administer cannabis at school. It recently passed the Illinois Legislature and has been sent to the governor for signing.

“[Medical marijuana] is really changing people’s lives in a positive way and I think state legislators should step up and make this a reality for a lot more of our kids,” says Roberts. He adds, “[Quintin’s Amendment] shows how government should work. I had a constituent with an issue, they came to their local representative, I wrote a bill to try and help them…and it passed all the way through.”

Quintin’s family feels a similar sense of relief—but also hopes other states will follow Colorado’s lead. “The kids are our future,” says Hannah Lovato, “and if they can’t get an education because they don’t have access to their medication, then what good are we doing them?”