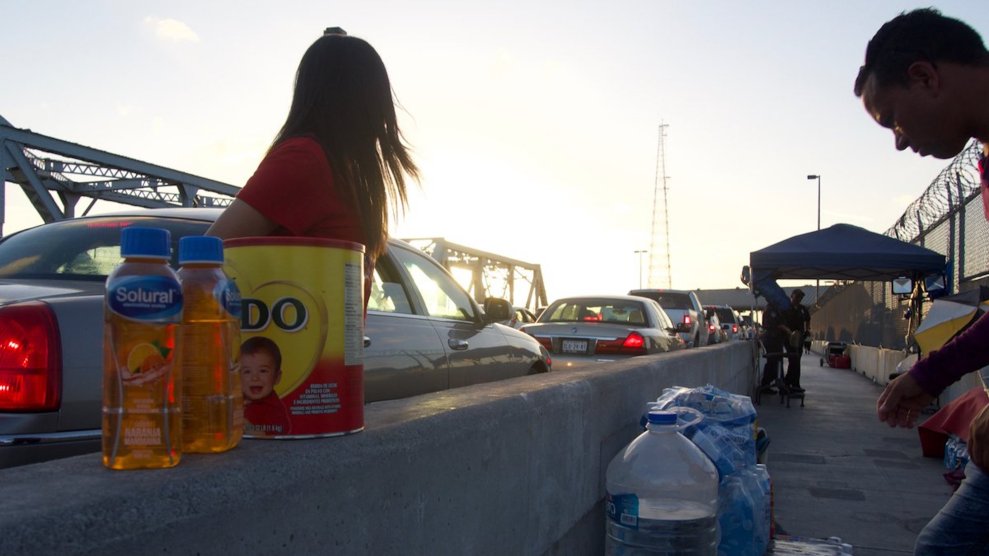 A the border crossing between Bownsville, Texas, and Matamoros, Mexico, migrants are forced to rely on donations of food and water from volunteers.Noah Lanard/ Mother Jones

The White House may have officially ended its policies of dividing families at the border last week, but roughly 2,000 children are still separated from their parents, and migrants seeking asylum continue to be turned away by US Customs and Border Protection officers. For the last week, Mother Jones reporter Noah Lanard and filmmaker Mark Helenowski were in Texas and Mexico, and spent some time on the bridge between Brownsville and Matamoros, following the stories of some of the people there who were still hoping to enter the United States.

Our ace immigration reporter @nlanard and filmmaker @MarkHelenowski are on the ground at the border this week reporting on the aftermath of the Trump administration's separation policy and what's next for families. Be sure to follow along. pic.twitter.com/m33SPVwyQR

During the first two days, they saw a number of families waiting for stretches of eight hours or more to claim asylum. Many of the migrants were women and children, and lacked basic necessities such as water or diapers, much less cellphones. They relied completely on donations from strangers, and many didn’t know where they would sleep if they were denied asylum. One Mexican woman, who had been there since six in the morning, came to claim asylum for herself and the daughter of her recently murdered sister. They had been waiting for over eight hours by the time Mother Jones spoke with them.

Families are waiting at the border for long periods of time in "intense heat," reports Mother Jones' @nlanard from his second day at the Texas-Mexico border. Follow along for updates. pic.twitter.com/QC63lLDRdT

Right in the middle of the bridge is a tent where CBP officials have been telling families they cannot enter the United States. This tactic, which started approximately a month ago, violates US and international asylum policies. Families on the bridge could endure waits that last anywhere from one to two days to up to a week.

"It's a strange scene to see:" Day 3 of reporting from the Texas-Mexico border for @nlanard and @MarkHelenowski, where families and adults are waiting days to exercise their legal right to claim asylum https://t.co/ktIOEUJXTh pic.twitter.com/u9ek4DVSEs

On Thursday, Mother Jones continued its coverage from a rally at a federal court in Brownsville, where many had gathered to protest. “This is personal to me, this is why I’m here,” Norma Garcia-Lopez, who was a Mexican immigrant herself, told Mother Jones. “This is no longer about political lines. This is about humanity and how we’re treating each other.”

Our reporting continues: The scene at the federal court in Brownsville TX today as a passionate rally led by leaders of multiple faiths protested Trump's immigration policies and demanded to get inside. @MarkHelenowski & @nlanard were there. WATCH: pic.twitter.com/WBoubueVFa