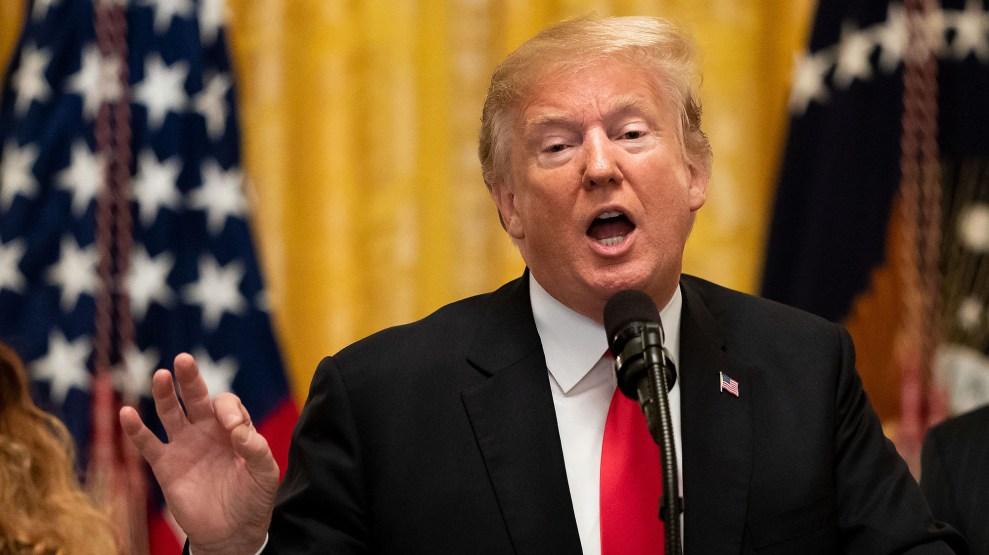 As protesters across the country today demand that children be reunited with their families on the southwest US border, President Donald Trump defended the work of Immigration and Customs Enforcement (ICE).

The Democrats are making a strong push to abolish ICE, one of the smartest, toughest and most spirited law enforcement groups of men and women that I have ever seen. I have watched ICE liberate towns from the grasp of MS-13 & clean out the toughest of situations. They are great!

The agency is under mounting pressure amid a string of recent developments that have put ICE in a less-than-flattering light.

Earlier this week, the Texas Observer reported that 19 senior ICE investigators asked DHS Secretary Kristjen Nielsen to spin the Homeland Security Investigations division out of ICE. “HSI’s investigations have been perceived as targeting undocumented aliens, instead of the transnational criminal organizations that facilitate cross border crimes impacting our communities and national security,” wrote 19 special agents in charge, adding that “the perception of HSI’s investigative independence is unnecessarily impacted by the political nature” of immigration enforcement. “Many jurisdictions continue to refuse to work with HSI because of a perceived linkage to the politics of civil immigration.”

On Thursday, as former ICE Spokesman James Schwab was giving an interview to a Bay Area television station, agents from the Department of Homeland Security interrupted the interview to question Schwab about whether he leaked information about ICE enforcement operations to Oakland Mayor Libby Schaaf back in February, prompting her to make a public warning about upcoming raids. Schwab resigned after the fallout, saying he could no longer “lie” about enforcement operations.

The following day, the DHS Inspector General’s Office issued a blistering report about ICE detention facilities, alleging that a lack of consistent oversight has led to “well-documented deficiencies that facilities commit to fixing routinely remain uncorrected for years” and “facilities failing to notify ICE about alleged or proven sexual assaults.”

The heightened attention to ICE has also come from people like Alexandria Ocasio-Cortez, the upset winner of a New York City primary earlier this week, who has led the calls to abolish the agency and reorganize immigration enforcement in the US. Several other prominent Democrats have joined her call, including Sen. Kirsten Gillibrand (D-NY) and New York City Mayor Bill DeBlasio. Trump’s tweet Saturday morning says “it will never happen.”

To the great and brave men and women of ICE, do not worry or lose your spirit. You are doing a fantastic job of keeping us safe by eradicating the worst criminal elements. So brave! The radical left Dems want you out. Next it will be all police. Zero chance, It will never happen!