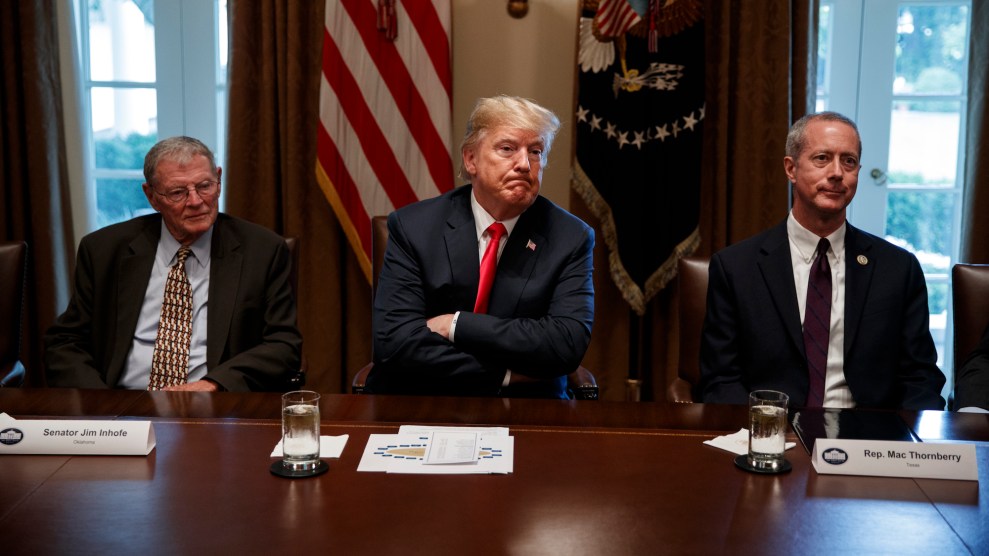 President Donald Trump is trying to to end the family separation crisis he created by detaining families together—indefinitely. But he likely won’t be able to do that for now, thanks to a 2016 court ruling that requires him to release children quickly. Instead, the outcome of the executive order he signed on Wednesday could end up looking a lot more like a retreat for the president.

Over the past week, Trump repeatedly claimed that only Congress had the power to address the crisis, but amid a growing uproar, he was forced to do so himself. Initial reports suggested that Trump would ignore the court decision and impose indefinite family detention. But Wednesday’s executive order proceeds more cautiously, instructing Attorney General Jeff Sessions to try to get a California federal court to reverse itself and allow families to be held indefinitely.

It’s unclear why the court would do so. If the court sticks with its decision, Trump will have to decide whether to release the children while the parents remain detained—causing another round of separations—or release families together, something he has decried as “catch and release” and promised to end.

Alternatively, he could flout the court and try to force it to issue an injunction to stop the administration’s indefinite detentions. The injunction would allow him once again to portray judges as the roadblocks to realizing his agenda. But the Justice Department says it will not ignore the court decision and the 1997 Flores settlement agreement it is based on.

JUST IN: Senior Justice Department official Gene Hamilton confirms the Flores settlement still controls, and that unless Congress or the court acts, the government can only detain families together for "up to 20 days."

Trump’s executive order does not end the zero-tolerance initiative under which parents are being criminally charged for crossing the border without authorization. Instead, Trump is directing Homeland Security Secretary Kirstjen Nielsen to keep families together while parents face criminal charges. The zero-tolerance policy was launched by Sessions in April and is responsible for the current separation crisis, which has split more than 2,000 children from their parents in just over a month.

A 2016 decision from the 9th Circuit Court of Appeals requires the Department of Homeland Security to release children in family detention facilities after 20 days. Trump was initially expected to ignore that ruling and call for families to be detained indefinitely. Instead, Trump’s order directs Sessions to ask the federal court for the Central District of California to allow families detained throughout immigration proceedings, which can last more than a year. Dolly Gee, a judge at that court, issued the initial 2015 ruling that the 9th Circuit largely upheld in 2016. Gee found that both parents and children have to be quickly released, but the 9th Circuit limited her decision to apply only to children. There is no reason to think Gee would reverse herself just because the administration is asking her to.

But even if Wednesday’s order stops the family separations, immigrant advocates strongly oppose Trump’s decision to place families in detention instead. Michelle Brané, the director of the Migrant Rights and Justice program at the Women’s Refugee Commission, told reporters that Trump is replacing the trauma caused by the separations with the trauma caused by family immigration detention. “Do not be fooled,” she said. “This is a trap. The children involved in these situations are still being traumatized.”

The government currently has capacity to detain only about 3,000 people in family detention facilities. Trump’s order calls on the heads of government agencies to provide DHS with additional available facilities to house families.

Karen Tumlin, the director of legal strategy for the National Immigration Law Center, said on the same call with reporters that Trump deserves no credit for the decision. “The president doesn’t get any brownie points for moving from a policy for locking up families separately to locking them up together,” she said.