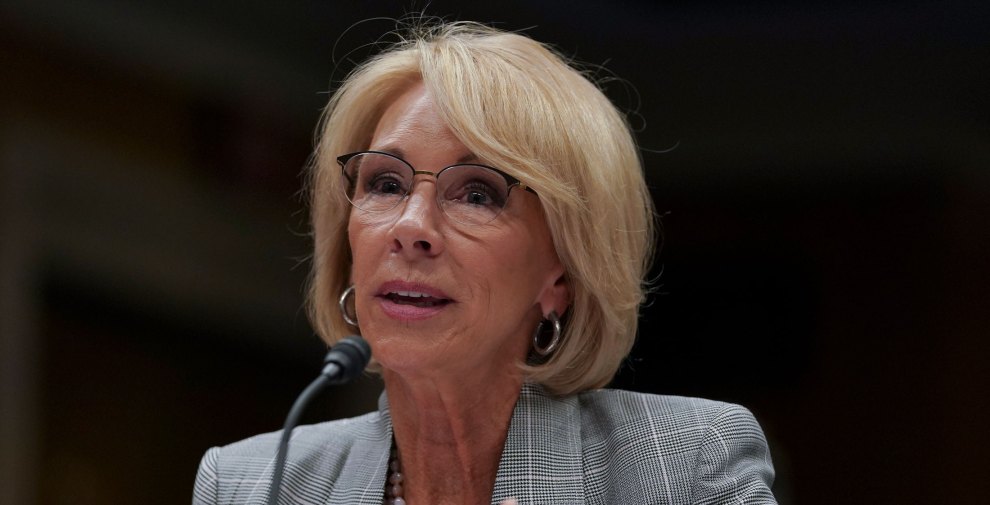 On Thursday, the Council of Parent Attorneys and Advocates (COPAA) filed a federal lawsuit against Trump’s Education Department, challenging the agency’s decision last week to delay an Obama-era rule that meant to address disparities in treatment of students of color with disabilities.

The provision at the center of the suit is known as the “Equity in IDEA” rule. Taking effect in January 2017, it required states to determine if racial disparities in the identification, treatment, and discipline of students with disabilities were occurring in school districts in compliance with the Individuals with Disabilities Act. Specifically, if a state identified “significant disproportionality” in a school district, the state would examine the district’s policies and practices to see if they were improperly treating and identifying students and, if not, make sure the districts change their practices. The department gave states 18 months to comply with the regulation.

But last week, on July 3—just two days after states were supposed to be in compliance—the agency issued a final notice that it would delay for two years the special education rule’s implementation. COPAA, a nonprofit organization that advocates for protecting the civil rights of students with disabilities and their families, now alleges that the move violates the Administrative Procedure Act, the federal law that governs how regulations are proposed, and is requesting that a federal judge block the department from moving forward with the regulation’s delay.

“We opposed the delay in the regulations because it will harm children and parents by stalling much-needed reform in the ways that states determine which district is engaging in unlawful practices that result in disproportionate and inequitable treatment of students of color,” said COPAA executive Denise Marshall in a conference call Thursday.

Seth Galanter, senior director of legal advocacy at the National Center for Youth Law, which filed the suit on COPAA’s behalf, told reporters on the same call that the Education Department had failed to provide a reasoned explanation for the change and that its motivation can’t “simply be that they have doubts about the premise” of the regulation. In its notice published in the Federal Register, the Education Department said it was concerned that the rule may “create an incentive” for school districts to establish “de facto quotas” in placing, identifying, or disciplining students with disabilities “to avoid being identified with significant disproportionality.”

An Education Department spokesperson told Mother Jones the agency would not comment on pending litigation.

In 2004, Congress amended the Individual with Disabilities Education Act (IDEA) to force states to address disparities in the identification of students with disabilities for special education services, the placement of students in restricted settings, and discipline of students of color at higher rates than their peers. Yet there was no uniform definition for what was considered “significant disproportionality” under IDEA. A report by the Government Accountability Office in 2013 found that the way states defined significant disparities in districts under IDEA varied widely to the extent that it provided “no assurance that the problem is being appropriately identified across the nation.” The report noted that in 2010, just two percent of districts demonstrated significant disparities under IDEA and used federal funds to tackle overrepresentation in special education. Half of those districts were in five states. This left thousands of students of color with disabilities at risk of not receiving the services they needed and states unable to identify the true scope of their disparity problems.

So in 2016, then-Education Secretary John King Jr. announced the rule to create a standard methodology for states to follow to determine if racial disparities exist. “Children with disabilities are often disproportionately and unfairly suspended and expelled from school and educated in classrooms separate from their peers,” King said at the time. “Children of color with disabilities are overrepresented within the special education population, and the contrast in how frequently they are disciplined is even starker.”

After Trump was elected, the Education Department began signaling that it intended to delay the rule. In December 2017, department spokeswoman Elizabeth Hill told the New York Times that it was “prudent to delay implementation for two years” after the department said it received concerns about the rule during its regulatory review process. More than three months after the department opened its comment period in February, it issued its decision on July 3.

Thursday’s legal challenge comes more than a week after the Education Department, along with the Justice Department, rescinded several guidances that encouraged schools to consider race in college admissions and student assignment in K-12 schools. And in late May, COPAA, the National Federation for the Blind, and the NAACP sued the Education Department for changes the agency made to the way it handles civil rights complaints, alleging that the department had violated the Administrative Procedures Act.