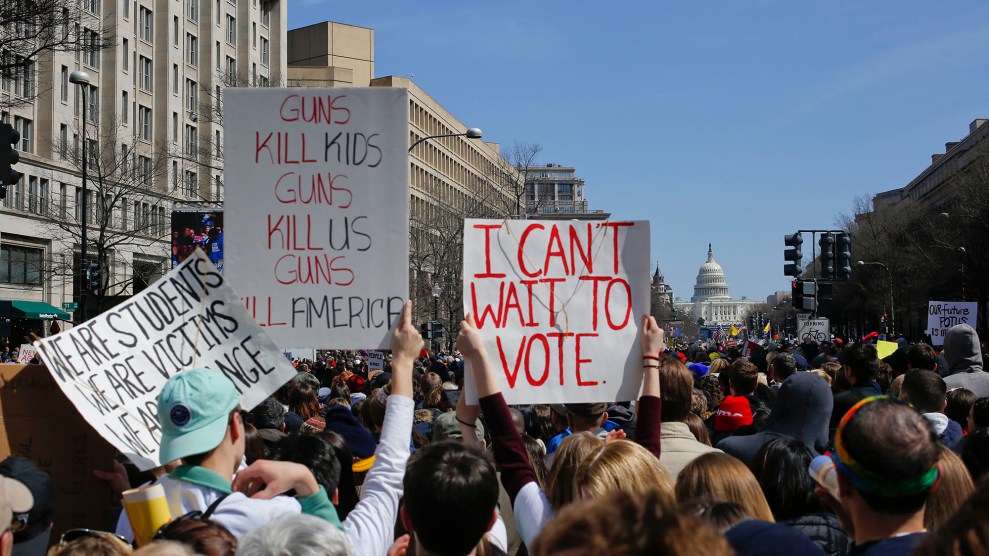 The March for Our Lives gun control rally in Washington, DC, on March 24, 2018Pablo Martinez Monsivais/AP

Last week, Rep. Brian Fitzpatrick received a coveted endorsement that no other Republican has obtained this election cycle. Fitzpatrick, the GOP incumbent in Pennsylvania’s highly competitive 1st Congressional District, won the approval of Giffords, the gun control organization founded by Gabby Giffords, the former Arizona congresswoman who was severely injured in a 2011 shooting. The group lauded the freshman lawmaker’s support for expanding background checks and for restricting assault weapons sales. It also praised his across-party-lines vote against a bill that would require states to recognize the validity of concealed-carry permits issued by other states—a top legislative priority for the National Rifle Association. “Congressman Fitzpatrick is a leader in the Republican caucus on the issue of gun safety,” the Giffords group wrote.

The Giffords announcement has raised more than a few eyebrows, putting Democratic operatives at odds with a gun control group they usually view as an ally. In part, that’s because Fitzpatrick’s record hasn’t always aligned with Giffords’ portrayal of him. Here’s how the Giffords endorsement describes Fitzpatrick’s vote on the concealed carry measure:

In 2017, Congressman Fitzpatrick voted against concealed carry reciprocity, which would force Pennsylvania to allow potentially untrained, unlicensed individuals to carry hidden, loaded guns in its communities.

But in a letter Fitzpatrick drafted late last year, he provided a very different explanation for his vote against the concealed-carry reciprocity legislation, saying that he opposed it because it contained unspecified “extraneous provisions.” He added that he looked forward to working with Senate leaders to pass “the most effective, consensus reciprocity measures possible.”

Fitzpatrick’s office did not respond to multiple requests for comment, and it’s unclear which parts of the House bill he objected to. Unlike the Senate version of the bill, the House legislation includes language that allows permit holders to carry firearms into school zones and onto federally owned lands; affirms law enforcement officers’ right to search anyone reasonably suspected of breaking the law; and improves the National Instant Criminal Background Check System for firearm purchases.

In the letter, dated a week after the vote, Fitzpatrick wrote that he was “firmly committed to defending the Second Amendment and the rights of gun owners” and that “fundamental to that commitment is my firm belief in the concept of reciprocity.” He added:

Our Second Amendment rights are not limited to our homes, and are not limited to our home states. It is a national constitutional right that must apply across the nation. Law-abiding citizens who have fulfilled the necessary requirements in their home state to carry a firearm for self-protection should not have their Second Amendment rights infringed by redundant regulations and bureaucracies in other states. In an increasingly polarized environment where law-abiding gun owners unfairly find themselves demonized by partisan politicians and the media, advancing reciprocity is a critical step in protecting Second Amendment rights from the whims of partisan legislators and activist judges.

Fitzpatrick then noted that he planned to work with the Senate to craft a bill with “clean reciprocity language.”

You can read the signed letter—which Fitzpatrick’s office submitted to House officials for approval before it could be sent to constituents at taxpayer expense—below. It’s unclear whether the letter was ultimately sent to constituents and, if so, how many received it. (This version was addressed to the Fitzpatrick staffer who submitted it for approval.)

“This is a prime example of why we just can’t trust Rep. Brian Fitzpatrick on guns and to reduce gun violence,” says Zoe Wilson-Meyer, campaign manager for Democrat Scott Wallace, a progressive philanthropist and former Senate staffer running to unseat Fitzpatrick. “To moms and students demanding action on guns, he says we should ‘stop at nothing’ to keep kids safe, but to conservatives, he embraces some of the most extreme gun-rights measures.”

The concealed carry controversy isn’t the only reason that the Giffords decision has irked some Democratic operatives, who view the race as a prime opportunity to flip a swing district in their effort to retake control of the House of Representatives. Wallace has made gun control a central tenet of his campaign—he’s been on local airwaves since May with an ad that calls for an assault weapons ban, universal background checks, and laws that take guns out of the hands of those who pose a risk to themselves or others.

Isabelle James, the political director at Giffords, points out that her group is a non-partisan organization and that it hopes to make gun control a bipartisan priority. “If Republicans remain in control of Congress, having leaders like Brian Fitzpatrick is even more important,” she says. “He can work behind the scenes to help block the gun lobby’s dangerous agenda.” She adds that while the Giffords is focused on taking the House back from the current Republican leadership, a victory for a Republican like Fitzpatrick could help change the minds of GOP lawmakers who have toed the party line. “We want to show that Republicans and Democrats can run and win on this issue.”

Asked specifically about Fitzpatrick’s letter promising to support concealed-carry reciprocity in the future, the Giffords group said that what’s most important is that he voted against the legislation in December.

“If Republicans remain in control of Congress, having leaders like Brian Fitzpatrick is even more important.”

Endorsements from national gun control groups matter more in 2018 than they ever have. The February school shooting in Parkland, Florida, sparked widespread demands for gun reforms that haven’t yet been met with legislative action. And while the issue has faded somewhat in importance to voters in recent months, polls show that it remains a top concern. Gun control organizations have found themselves with vast networks of new volunteers and financial backing that will allow them to throw extensive resources behind politicians who champion their cause. And candidates, eager to connect with those resources, have courted the groups’ approval. Moms Demand Action, the grassroots volunteer arm of Michael Bloomberg’s Everytown for Gun Safety, says it has handed out far more “Gun Sense Candidate” distinctions in the program’s inaugural year than it ever expected. Kris Brown, co-president of the Brady Campaign to Prevent Gun Violence, said her group has received many more endorsement requests than in previous cycles.

It’s nothing new for gun control groups to endorse members of both parties. In 2016, for example, Giffords endorsed another Pennsylvania Republican, Sen. Pat Toomey, who, like Fitzpatrick, has reached across the aisle on several gun control measures. (Toomey partnered with Democrat Joe Manchin in a failed effort to expand background checks after the 2012 Sandy Hook shooting.)

But any congressional action on gun control would almost certainly rely on Democrats taking over Congress—the GOP-controlled House has refused to even hold votes on most gun control measures in the wake of the Parkland shooting. Pennsylvania’s 1st district presents as good an opportunity as any for the Democrats. It’s is one of the half-dozen GOP-held districts that has shifted to the left, thanks to court-mandated redistricting. As a largely suburban district, nestled along the New Jersey border between Philadelphia and Allentown, it’s also prime real estate for gun control groups, who have found that the college-educated, white-collar voters who reside there are particularly invested in the issue. Giffords has already endorsed a dozen Democratic challengers running in districts that fit that mold.

On the campaign trail, both candidates have sought to appeal to these voters. Wallace has embraced the “common sense” gun control measures that have gained traction following Parkland and has called for holding gun manufacturers legally responsible when their products kill people. For his part, Fitzpatrick has co-sponsored bills that would expand background checks and take guns out the hands of people deemed a risk to themselves or others. He’s introduced legislation to raise the minimum age to purchase assault weapons to 21 and to ban bump stocks—the device used in last year’s Las Vegas massacre that makes semi-automatic weapons behave like machine guns. And whatever his motivations, he was one of only a dozen Republicans to vote against the concealed-carry reciprocity bill. Both candidates received the “Gun Sense Candidate” distinction from the local chapter of Moms Demand Action.

But to suggest Fitzpatrick’s public stances have always been matched by political action would be a mistake. There have been few votes on gun measures during his 18 months in Congress, but he did vote for measures that would prevent the Veteran Affairs’ Department and the Social Security Administration from sharing individuals’ mental health records with the background check system that is used to determine whether potential firearms buyers are allowed to purchase weapons. After Parkland, Allentown’s Morning Call newspaper noted that Fitzpatrick supports an assault weapons ban, but he has not co-sponsored the legislation that would do that—something that gun control groups have implored members of Congress to do. He received a “B” rating from the NRA during his 2016 run for Congress.

James, from the Giffords group, says it’s too early to say whether her organization will spend heavily to keep Fitzpatrick in office. She notes that the group will focus most of its resources on “defeating incumbents who stand with the gun lobby and the NRA.” In other words, the endorsement may end up being largely symbolic.