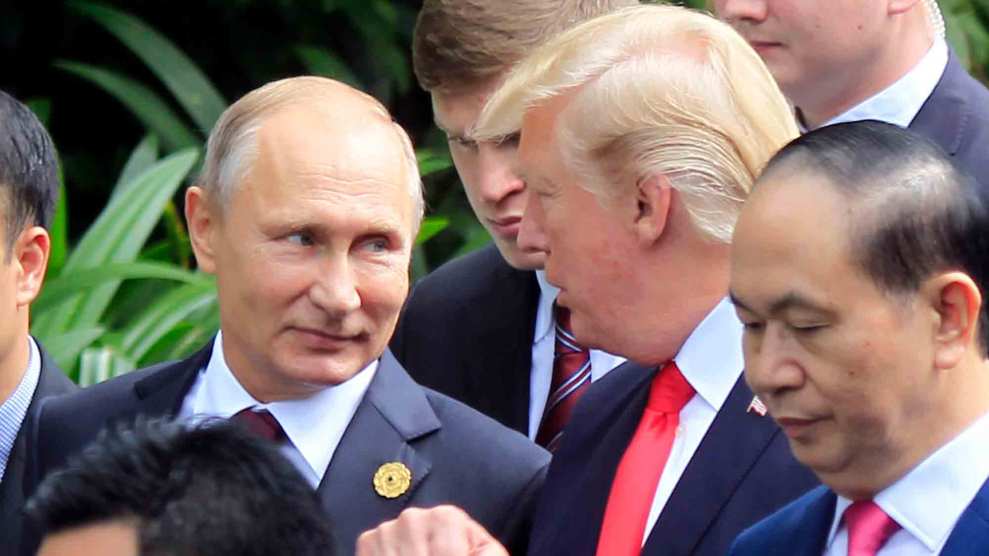 The latest news from special counsel Robert Mueller is a stunning indictment of…President Donald Trump and his Republican minions.

For almost two years, Trump and his defenders have dismissed, downplayed, and denied the Russian attack on the 2016 presidential election, and they have denigrated Mueller’s investigation as a “witch hunt” and a partisan hit job. Recently, Trump amplified Vladimir Putin’s claim that Moscow did not intervene in the campaign and declared that Putin was “fine.” That is, Trump gave the Oval Office seal of approval to Russian disinformation. And the day before Mueller charged 12 Russian intelligence officials with conspiring to intervene in the election and committing cyber fraud and money laundering, Trump’s GOP foot soldiers on Capitol Hill staged an absurd circus, spending almost 10 hours on a hearing attacking FBI official Peter Strzok in order to discredit the Mueller probe. Not once since Election Day 2016 have congressional Republicans devoted as much passion and time to a hearing focused on how Putin waged information warfare on the United States to help Trump become president.

It is absurd that the Russian assault on American democracy has been a matter of debate. The US intelligence community, most of Trump’s own senior national security appointees, and the GOP-led House and Senate intelligence committees have each accepted the assessment that the hack-and-dump operation that targeted Hillary Clinton’s campaign was mounted by Russian intelligence under instructions from Putin. Still, Trump has repeatedly questioned Russian culpability, and his Republican enablers have generally let his assertions go unchallenged and applied their energy to promoting distractions and conspiracy theories that divert attention from the two core elements of the Trump-Russia scandal: Russia attacked the United States, and Trump and his lieutenants, during and after the election, aided that attack by joining with Moscow in denying Russia was the culprit. (Mueller’s new indictment contains this stunning allegation: Russian intelligence operatives tried to hack into email accounts used by Clinton’s personal office and her campaign on the same day—July 27, 2016—that Trump publicly said, “Russia, if you’re listening, I hope you’re able to find the 30,000 emails that are missing.”)

For some of us, this indictment of the Russian cyber spies comes as no surprise. It has long been expected. Government bodies, media outlets, and cybersecurity firms have documented the Russian operation and described it as part of a wide-ranging Russian assault on the US political system. Many reporters—including me—have been fixated on all this for nearly two years. Michael Isikoff and I wrote an entire book on the subject: Russian Roulette: The Inside Story of Putin’s War on America and the Election of Donald Trump. My colleagues at Mother Jones have maintained an extensive Trump-Russia timeline. The New York Times and the Washington Post shared a Pulitzer Prize for their coverage of the Russia connection. Yet many Republicans and conservatives have continued to avert their eyes from the matter—arguably the greatest political scandal in American history. Instead, Trump, Fox Newsers, and lapdog congressional GOPers claimed that tangential and phony issues—unmasking, surveillance warrants, Trump being wiretapped—and a nefarious deep-state plot against Trump comprised the true scandal. And, too often, media outlets have taken the bait and chased after these concocted narratives.

Yet the new indictment is a reminder—unfortunately, a much-needed reminder—of, well, reality. In detail, it depicts how the (alleged) attack transpired. The specifics are revelatory. The indictment quotes messages WikiLeaks (identified in the document as “Organization 1”) allegedly sent to Guccifer 2.0—the internet entity set up by Russian military intelligence to disseminate the Democratic National Committee emails stolen by Moscow’s hackers—as WikiLeaks tried to obtain these documents so it could post them shortly before the Democratic convention to hurt Clinton and benefit Trump. It confirms that Roger Stone—identified as “a person who was in regular contact with senior members of the presidential campaign of Donald J. Trump”—was in contact with Guccifer 2.0 during the campaign. (In August 2016, he and Breitbart published a piece in which Stone insisted Guccifer 2.0 was indeed what this persona claimed to be: a lone Romanian hacker. The bottom line: Stone and Breitbart actively assisted a Russian disinformation operation conducted to camouflage an attack on the United States.)

Though the indictment does not address this particular issue, it does indirectly cast light on the sin that Trump and his henchmen have been trying to hide: They helped this Russian operation by repeatedly insisting it wasn’t happening. The main question in this scandal is not whether there was outright collusion between Trump and the indicted Russian intelligence operatives. (Who seriously believes that Trump told Viktor Borisovich Netyksho or the 11 other indicted Russians what DNC documents to pilfer or how to release them?) Trump’s already proven transgression is that during the campaign he kept insisting Russia was not engaged in this wrongdoing—even after he was told in a briefing by US intelligence that Moscow was mounting this assault. Trump’s echoing of Moscow’s own denials helped a foreign adversary as it sought to covertly influence an American election.

For a long time, I and others have contended this is the foundation of the Trump-Russia affair. (Over a year ago, I went through how Trump and his crew assisted and encouraged Moscow.) Yet Trump and his acolytes have sought to draw notice away from this profound act of betrayal. Their mission: to prevent thorough consideration of the Russian attack and Trump’s role in the cover-up. After all, these are misdeeds that do raise questions about Trump’s legitimacy as president—or, at least, his ability and willingness to fulfill his No. 1 responsibility: protect the nation.

Mueller’s indictment, perfectly timed for Trump’s upcoming summit with Putin, inhibits Trump’s self-serving effort to make the Trump-Russia scandal vanish. It undercuts his attempts—and those of his amen chorus—to move past his treachery.  It places the Russian attack in the spotlight and rings a bell on Trump. In between the lines, the indictment presents a grave charge: Trump abetted a serious Russian operation to undermine an American election. It also conveys an important message: This story is not over yet.