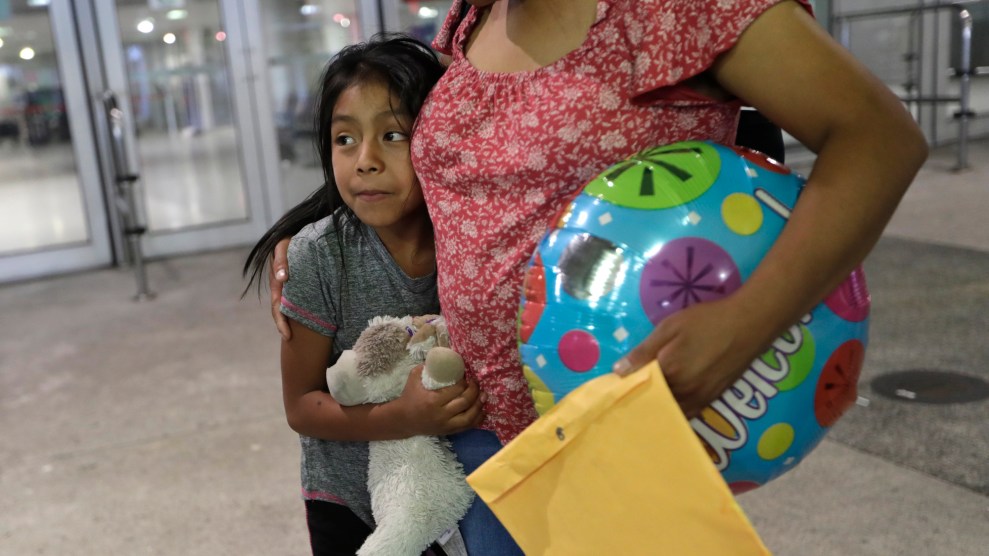 Buena Ventura Martin-Godinez, right, stands with her daughter Janne after being reunited at Miami International Airport on Sunday.Lynne Sladky/AP

A federal judge has rejected the Trump administration’s argument that it shouldn’t have to reunite children with parents who have been deported. During a court hearing Friday afternoon, Judge Dana Sabraw ruled that parents who had already been removed from the country prior to his injunction blocking President Donald Trump’s family separation policy must still be reunited with their children.

The court hearing—part of a dramatic legal battle between the American Civil Liberties Union and the administration—followed Sabraw’s order last week requiring the government to quickly reunite separated families. Sabraw also ordered the government to produce a list of children under five who may still be separated from their parents by Saturday.

Sarah Fabian, the Justice Department attorney representing the government, told Sabraw that there are about 100 children under age five who may have been separated from their parents and who are being held in the custody of the Department of Health and Human Services’ Office of Refugee Resettlement, also known as ORR. Eighty-three of those children have been linked to 86 parents. Of those 86 parents, 46 are in immigration detention facilities, 19 have been released from the custody of US Customs and Immigration Enforcement, and 19 have already been deported. The government says it will not reunite two parents with their children because of those parents’ alleged criminal histories.

The government says it has 16 children under age five in its custody who it has not been able to link to an adult. The government acknowledges that its records contain indications that those children had been separated from their parents by US immigration officials.

The government does not yet know how many parents were separated from children between the ages of 5 and 18, according to court documents.

The Justice Department filed court documents Thursday night stating that it will likely not be able to meet those deadlines. It is blaming the delay on ORR policies designed to prevent children in its custody from being placed with human traffickers and other adults who may pose a threat to children. Gelernt pointed out that those requirements were designed to protect children who arrive at the border alone, not those who were taken from their parents by the government. He said he doesn’t know of any child advocacy group that believes ORR should go through those lengthy procedures in this situation. “It just doesn’t make sense,” he continued. “You’ve taken the child from the parent. They need to give to the child back.”

The Trump administration says it is currently testing the DNA of parents and children to ensure that children are released to the correct adults. The administration stated in a court filing that determining which parents were separated from children “is extraordinarily time and resource intensive”—yet another sign that it did not keep adequate records to easily track the families it was separating at the border. It also acknowledged that ORR’s databases were not designed to facilitate the reunification of families separated by the government.