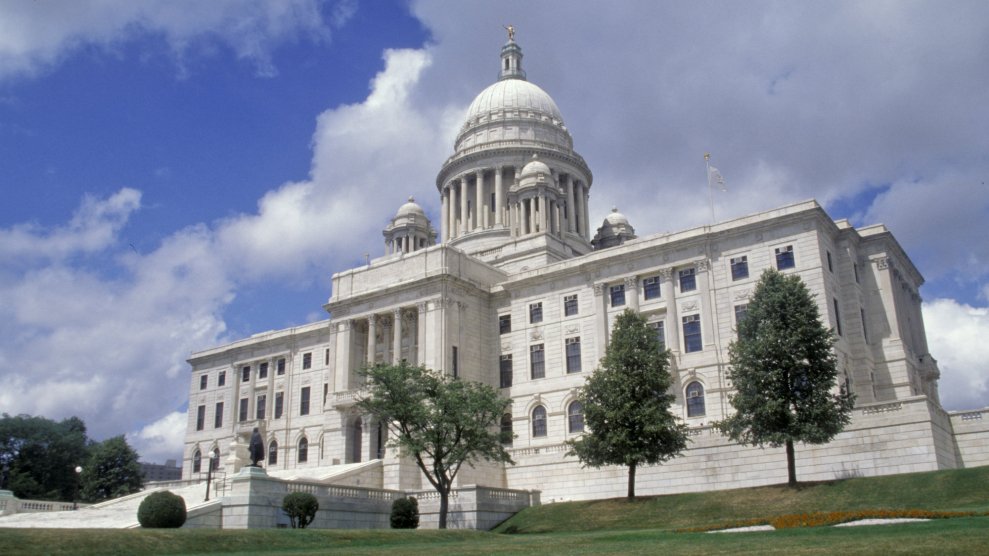 When Edith Ajello, now a 13-term lawmaker in Rhode Island’s General Assembly, became pregnant in 1965, she was a college student in central Pennsylvania and abortion was illegal. It was eight years before the Supreme Court legalized abortion nationwide in Roe v. Wade, so Ajello quietly paid a visit to a nearby town where a doctor best known for treating coal miners also terminated unplanned or unwanted pregnancies. Ajello recalls that local law enforcement officials tacitly permitted his illegal abortion practice as long as he remained the only practitioner in the area willing to navigate the smoky mines to treat workers.

Once the beneficiary of an illegal abortion in the most conservative area of a state with a demonstrated hostility toward reproductive rights, Ajello has found herself at the center of an abortion debate in the least likely of places: Rhode Island, which is one of the most reliably blue states in the country. Since the Democratic National Committee declared in 1996 that abortion was a “difficult issue” that should become “more rare,” the national party has veered sharply to the left on reproductive rights. The most recent party platform upheld a woman’s right to a “safe and legal abortion” and called for a repeal of the Hyde Amendment in order to let federal funds be spent on abortions regardless of circumstance.

Democrats, who have long dominated the State House, have controlled the governor’s office for five years, yet a bill enshrining the right to an abortion has languished through two straight legislative sessions in the state House and Senate without even being considered for a vote. Ajello, the sponsor of the Reproductive Health Care Act, a version that was introduced in the General Assembly, hopes that it will pass easily in next year’s legislative session given Justice Anthony Kennedy’s retirement. “The complacency is gone,” she said. “People are concerned.”

But, in a state where 41% of residents identify as Catholics and a powerful anti-abortion lobby has carved out an influential foothold, lawmakers like Ajello are not guaranteed the support of their Democratic colleagues for measures that explicitly support abortion rights. During the 2016 election cycle, the advocacy group Rhode Island Right to Life endorsed 48 Democrats across the state legislature, including the top three Democrats in both the House and Senate. Five of the six leaders were reelected. Of that group, pro-choice lawmakers reserve the most venom for Speaker Nicholas Mattiello, a six-term representative from Cranston. Near the end of the state’s six-month legislative session, Mattiello has the power to unilaterally bring a measure to the floor that was not sent out of committee, but he has repeatedly declined to do so for the Reproductive Health Care Act.

He explained his reasoning in a May interview with Rhode Island Public Radio.”I see no effort nationally to change the Roe v. Wade standard,” he said, “so I don’t think it’s a real concern.” This approach infuriates lawmakers like state Rep. Teresa Tanzi, a co-sponsor of the pro-choice legislation, who told Mother Jones that she has not spoken to the speaker since the legislature adjourned last month. “He is a man of a certain age and a certain upbringing who does not understand women’s issues,” she said. Mattiello did not respond to several emailed questions.

“He is a man of a certain age and a certain upbringing who does not understand women’s issues.”

Anti-abortion Democrats are not exactly a novelty in Rhode Island. Even though less than 12 percent of registered voters are Republican, over 40 percent of Rhode Islanders are Catholic, and priests in the Ocean State are not shy about preaching politics from the pulpit. At St. Thomas More, a 134-year-old church in Narragansett, the pastor asked parishioners to lobby against the “pro-death legislation” that Tanzi and others had sponsored. The letter, which was signed by Pastor Marcel Taillon and included in the weekly church bulletin, named Tanzi and two other lawmakers specifically and included their pictures. Taillon did not respond to multiple requests for comment.

“Even when a state is more progressive, it can be very hard to put reproductive rights and health on the agenda,” said Elizabeth Nash, a policy analyst at Guttmacher Institute, a think tank that researches reproductive health. Nowhere is that more true than in Rhode Island, which only voted for Republican presidents four times in the past 90 years, but managed to amend its constitution in 1986 to include the phrase: “No right to abortion granted,” which is expressly at odds with federal law. (The state’s attorney general has never enforced this.)

“Even when a state is more progressive, it can be very hard to put reproductive rights and health on the agenda.”

Over 60 percent of Rhode Islanders support reproductive rights—as does Democratic Gov. Gina Raimondo—yet a majority Democratic legislature in a deeply liberal northeastern state was unable to pass a pair of bills in March mandating contraceptive materials be included in health insurance contracts, and that Medicaid recipients be entitled to one year’s supply of birth control. “We have these Church-based opinions dominating what medical experts have told us,” Tanzi said. “There’s been very little support for any reproductive health care in the General Assembly, even when it’s shown to prevent unintended pregnancies and abortions.”

The political circumstances have changed though. The likely confirmation of Judge Brett Kavanaugh to the Supreme Court spells could lead to the almost inevitable undermining of the Roe precedent and has motivated several pro-choice state lawmakers nationwide to make headway on reproductive health legislation. While Nevada and eight other states have pro-choice laws, legislators in the liberal, northeastern corridor of the country have stumbled in recent efforts. Massachusetts, which became the first state to certify same-sex marriages in 2004, still has not repealed a ban on abortion that predates Roe. (A bill known as the “NASTY Women Act” just cleared the state House and Senate on Thursday and now awaits Republican Gov. Charlie Baker’s signature.) In New York, pro-choice lawmakers increasingly have the support of Gov. Andrew Cuomo, whose primary challenger Cynthia Nixon recently held up a wire coat hanger while telling the story of her mother’s illegal abortion. Nonetheless, a reproductive health bill has not been able to survive the Republican-dominated Senate.

If Rhode Island does end up enshrining protections for abortion into state law, it likely won’t happen until the new legislative session begins in 2019. Earlier this month Raimondo expressed interest in convening a special session with reproductive health a top priority, but even the RHCA’s most dedicated defenders have said their top priority should be the elections in November. (All members of the Rhode Island House and Senate run on two-year terms.)

“Frankly, I’d like to just have people really focus on who’s running for office,” said Sen. Gayle Goldin, who introduced the bill in the state senate. “Most voters in Rhode Island, up until the past year or two hadn’t realized that the Democrats they were voting to the state legislature were not necessarily holding the same positions on reproductive rights as our federal delegation does.”