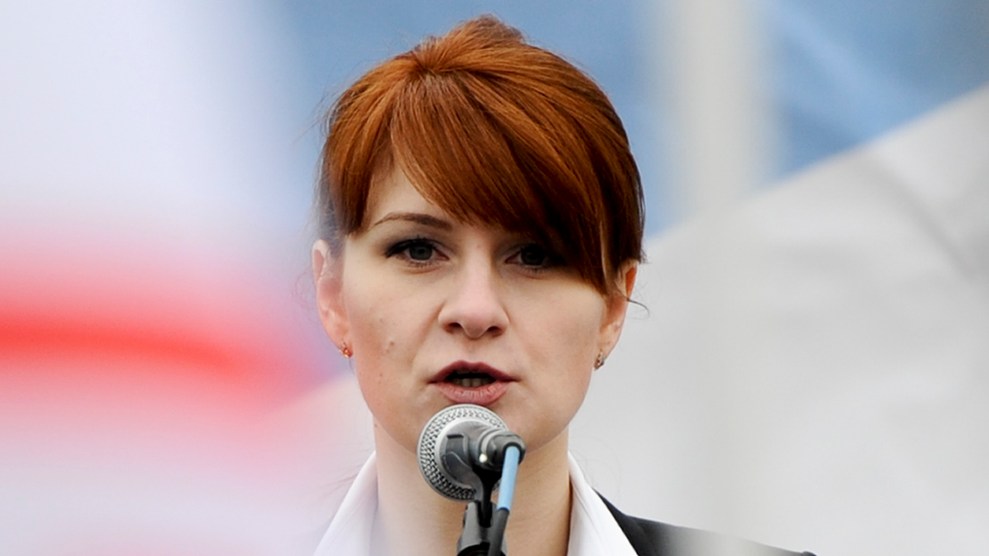 Maria Butina speaks at a rally in support of legalizing handguns in Moscow, Russia.AP

Maria Butina—the 29-year-old Russian who penetrated the NRA and other conservative groups and who this week was arrested and accused of functioning as a spy for Moscow—allegedly had help from from some well-connected and extremely wealthy men in her motherland. According to a filing submitted in court by federal prosecutors on Wednesday, Butina “has ties to the Russian oligarchy.” The document notes that her private tweets, emails, and chats “refer to a known Russian businessman with deep ties to the Russian Presidential Administration.” In other words, a businessman who is close to Vladimir Putin. All of which prompts an important question: Who exactly was this Putin-friendly Russian billionaire who was allegedly assisting Butina?

The document doesn’t identify the Russian moneybags. It only includes this description: “This person often travels to the United States and has also been referred to as her ‘funder’ throughout her correspondence; he was listed in Forbes as having a real-time net worth of $1.2 billion as of 2018.”

That latter piece of information is a rather specific clue. But if you turn to the Forbeslist, you will find there are 12 Russians listed at the $1.2 billion mark. There are, however, two in this group known to have a close relationship with Putin. The first is Yuri Kovalchuk. Forbes describes him this way:

Yuri Kovalchuk is friends with Russia’s president Vladimir Putin; they met when Putin was deputy mayor of St. Petersburg. They both had country houses in the Ozero dacha cooperative, and when Putin became president, many of the cooperative’s members’ careers improved. Kovalchuck is now the largest shareholder of Rossiya Bank and has a large stake in Sogaz insurance company.

Then there is Boris Rotenberg. Here is Forbes‘ rundown on him:

Boris Rotenberg and his older brother, Arkady, are co-owners of SMP Bank. The Rotenberg brothers were hit by US sanctions and had assets frozen in 2014 because of their close ties to President Vladimir Putin. The US Treasury claimed that Putin had awarded the Rotenbergs billions of dollars in contracts with Gazprom and for the Sochi Olympics.

Like Rotenberg, Kovalchuk was also sanctioned in 2014 by the Obama administration in response to Putin’s intervention in Ukraine. A statement issued by the Treasury Department described each as being part of Putin’s “inner circle” and noted why they were being sanctioned:

Arkady Rotenberg and Boris Rotenberg have provided support to Putin’s pet projects by receiving and executing high price contracts for the Sochi Olympic Games and state-controlled Gazprom. They have made billions of dollars in contracts for Gazprom and the Sochi Winter Olympics awarded to them by Putin. Both brothers have amassed enormous amounts of wealth during the years of Putin’s rule in Russia. The Rotenberg brothers received approximately $7 billion in contracts for the Sochi Olympic Games and their personal wealth has increased by $2.5 billion in the last two years alone…

Yuri Kovalchuk is the largest single shareholder of Bank Rossiya and is also the personal banker for senior officials of the Russian Federation including Putin. Kovalchuk is a close advisor to President Putin and has been referred to as one of his “cashiers.”

If Butina had a relationship with either Boris Rotenberg or Yuri Kovalchuk—let alone received financing from either—she would be connected to the core of Putin’s world.

In this filing, federal prosecutors maintained that the unidentified Putin-tied oligarch was not her only wealthy Russian benefactor. The document notes, “Immediately prior to her first trip to the United States in late 2014, Butina engaged in a series of text messages with a different wealthy Russian businessman regarding her budgets for her trip to the United States and meetings with [the Putin-connected oligarch].”

As Butina sought influence within the NRA and other conservative groups and tried to connect with the Trump campaign, she was working with Alexander Torshin, a deputy chairman of Russia’s central bank and a top official in Putin’s party who has been accused of money laundering (a charge he has denied). That is, she was no freelancer. But this new filing suggests Butina was also plugged into Putin’s “inner circle.” So what did President Putin know about Butina, and when did he know it?