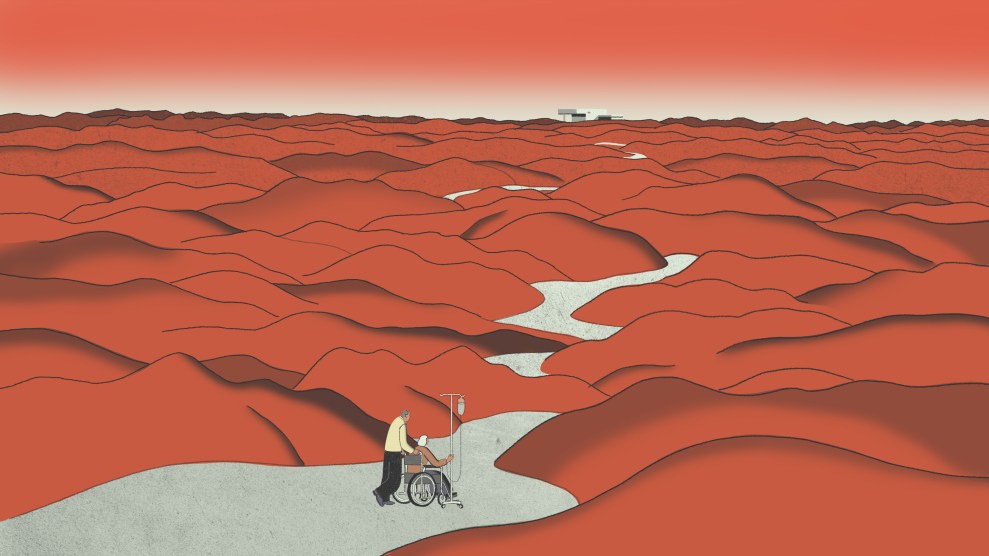 By the time Copper Basin Medical Center launched a GoFundMe campaign in May last year, the hospital in the Appalachian foothills was buried in debt. It had been forced to suspend inpatient operations; many of its nurses and staffers had gone weeks without paychecks.

The campaign aimed to raise $100,000, but when only $5,559 came in, Copper Basin closed its doors on October 1. It was a major blow to the citizens of Polk County, Tennessee, many of whom are poor and elderly and rely on Medicaid. Hospitals are shutting their doors rapidly across the state—eight have closed since 2013.

My home state of Tennessee is not alone. Since 2010, more than 80 rural hospitals have shuttered across the country, according to the Rural Health Research Program at the University of North Carolina-Chapel Hill. Nationwide, in communities like the one I grew up in, more than a third of rural hospitals are at risk of closure, and 41 percent are operating in the red. In 2016, the Kaiser Family Foundation examined three rural hospital closures in Kentucky, Kansas, and South Carolina. In each case, the next closest hospital was within 15 miles, but transportation still posed a significant barrier, particularly for elderly citizens who could not drive. A study from the Centers for Disease Control and Prevention found that people in rural areas are 50 percent more likely than city dwellers to die from unintentional injuries like car crashes and drug overdoses, in part because of greater distances to emergency care.

What’s more, rural communities tend to be both poorer and sicker than their urban counterparts. According to US census data from 2016, 46 percent of the country’s rural population uses a form of government insurance, compared with 36 percent of the urban population. CDC data shows that rural areas have higher death rates from cancer, heart disease, un­intentional injuries, chronic lower respiratory disease, and stroke than urban areas do. Infant mortality rates are roughly 20 percent higher in rural counties than they are in large urban counties.

The situation is significantly worse in the 17 states that have not joined Obamacare’s Medicaid expansion, most of them heavily rural.

But there’s another crisis linked to hospital closings: job losses. In many rural communities, the hospital is the largest employer. Brad Gibbens, a researcher at the University of North Dakota, estimates that when one shuts its doors, up to 25 percent of the surrounding region’s economy disappears. A cascading shortage of physicians and other health care professionals soon follows.

So why are so many hospitals closing? Carole Myers, an associate professor at the University of Tennessee-Knoxville who studies health care policy, says medical facilities in rural areas have long struggled thanks to sparse populations and high poverty rates. But the situation is significantly worse in the 17 states that have not joined Obamacare’s Medicaid expansion, most of them heavily rural. Those states have a higher rate of uninsured people, which means hospitals—which can’t turn anyone away from the emergency room—have to provide more uncompensated care.

According to a recent study from the Colorado School of Public Health, hospitals in states that did not expand Medicaid are six times more likely to close than hospitals in states that did, because they see more uninsured patients and provide more free care. “Not to say Medicaid in and of itself is profitable, but something’s better than nothing,” Richard Lindrooth, the lead author of the study, told Mother Jones. “It still pays better than uncompensated care.”

Most closures have happened in places where people came out in droves to vote for Donald Trump—and yet his administration hasn’t done much to turn the tide. Legislation sponsored by Rep. Sam Graves (R-Mo.) would expand funding and create more protections for rural hospitals. But the bill hasn’t gained much momentum: It has sat dormant in the House since 2015, though it was reintroduced last year. Meanwhile, in January, the Centers for Medicare and Medicaid Services reduced the reimbursements for a program that allows rural hospitals to buy drugs at significant discounts. And Republicans have suggested turning Medicaid into a block grant—a fixed amount of money doled out to states. Critics argue this system would just lead to more funding cuts as politicians wrestle over who gets what, potentially leaving hospitals worse off than before.

Three months after Copper Basin Medical Center shut down, the commissioners of Decatur County, Tennessee, voted to close their hospital. The nearest hospitals are almost 20 miles away in rural West Tennessee, which has lost four other major medical centers since 2014. This closure will further strain the already over­burdened hospitals left in the region, including the two in Jackson, where my parents live. As they get older, I can only hope those hospitals stay open—and up to the task of taking care of them.