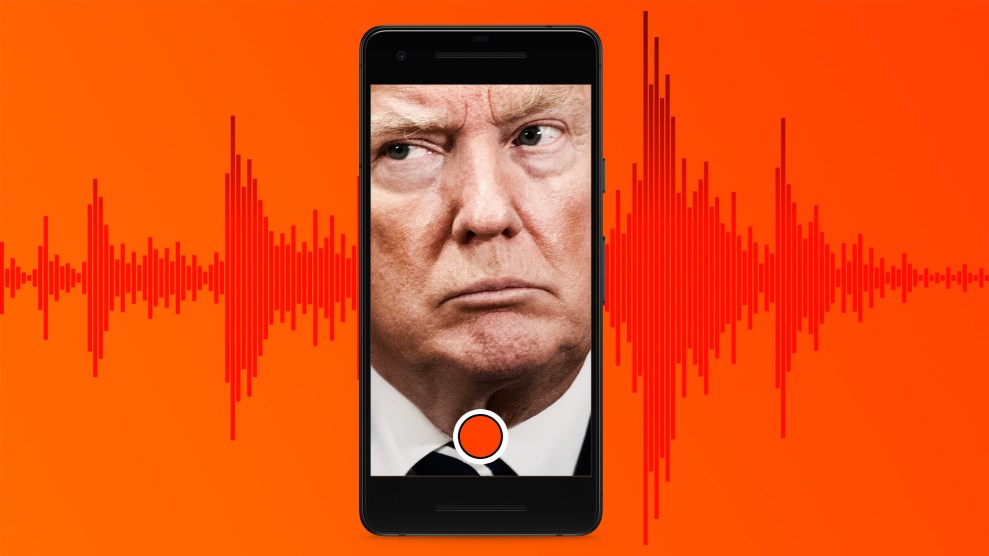 His former campaign boss Paul Manafort will be heading to trial later this month. Astonishingly, the prospect of Manafort in an orange jumpsuit sharing campaign secrets in exchange for a lighter sentence for the charges he faces of bank fraud and tax evasion isn’t at the top of President Donald Trump’s list of worries right now.

For this week’s edition of the Mother Jones Podcast, Washington bureau chief David Corn argues that it’s far more likely that the unraveling of Trump’s presidency will start with his longtime fixer-cum-lawyer, Michael Cohen—the keeper of Trump’s secrets, the manager of his alleged payoffs, and now, the president’s most intimate associate to come tantalizingly close to dishing Trump’s dirt.

“Cohen is really as far up the river as you can get without a paddle in this situation,” Corn says. “The feds are closing in on him and he has really one choice here to save his hide, and that is cooperate.”

On Tuesday, Cohen gave CNN a secret recording he made of the then Republican presidential candidate in September 2016, discussing payment for the rights to the story told by a former Playboy model, Karen McDougal, about her alleged affair with Trump. The president, through his spokeswoman at the time, denied any knowledge of payments. With the release of the tape, Cohen is now “on a new path,” his lawyer Lanny Davis told the New York Times on Tuesday night. “It’s a reset button to tell the truth and to let the chips fall where they may.”

Listen to the discussion below (and subscribe to the podcast):

Cohen appears to be inching closer to cooperating not only with Robert Mueller, the special counsel investigating the Trump-Russia scandal, but also with the US attorney for the Southern District of New York who is looking into payments that he made, or helped make, to two women who claimed to have had affairs with Trump. “You don’t get a choice: You cooperate or you don’t cooperate—you can’t cooperate just halfway there,” Corn says. “If he goes all in, Trump will be in a world of trouble.”

What kind of a lawyer would tape a client? So sad! Is this a first, never heard of it before? Why was the tape so abruptly terminated (cut) while I was presumably saying positive things? I hear there are other clients and many reporters that are taped – can this be so? Too bad!

Also on this week’s podcast, host Jamilah King talks with Jeff Ball, a Stanford Law School lecturer and expert in all things energy and the environment, about how Trump is making sure solar’s bright future is being written in Mandarin. As Trump destroys America’s clean-energy policy, the Chinese are gaining on the West in the most important arena of all: innovation. “And China is doing this in a very strategic way, in a very methodical way,” Ball says. Read more from Ball’s Mother Jones investigation in the July/August edition of the magazine.

And finally, MoJo‘s Becca Andrews recounts the story of Emily Joy, who was abused by an evangelical church youth leader when she was a teenager. Now, she’s leading #ChurchToo to change evangelical America, a movement that’s opened the floodgates of long-hidden stories of abuse and forced a much-delayed reckoning.