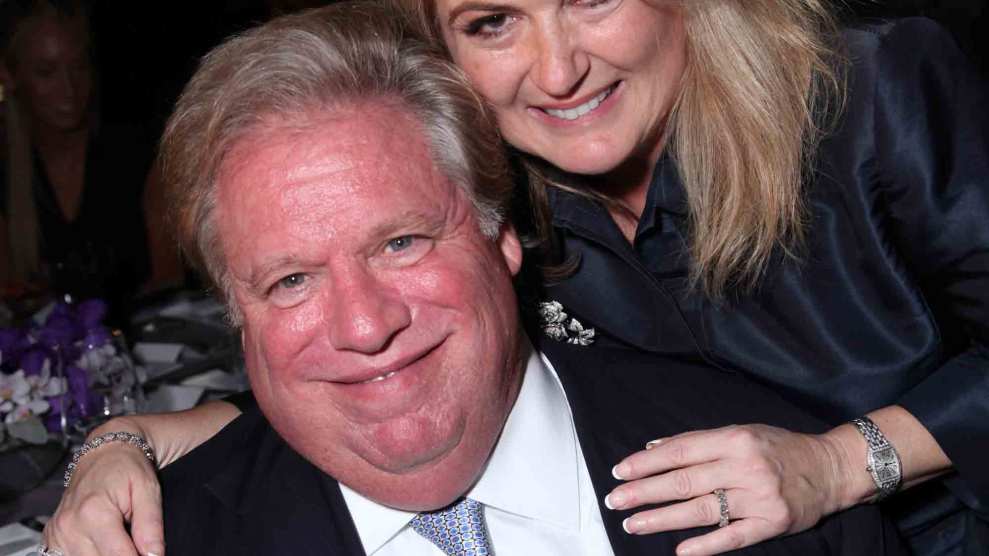 The various scandals surrounding President Donald Trump and his crew have generated much speculation and even some conspiracy theories. One theory that has drawn significant attention is the possibility that top Republican fundraiser Elliott Broidy took the fall for a supposed Trump affair with a Playboy Playmate who ended up pregnant. While this is a delicious piece of conjecture for Trump foes, I have to report that I recently tripped over information undermining this fanciful idea.

Here’s the official story: In April, the Wall Street Journal revealed that in late 2017, Michael Cohen, Trump’s longtime fixer, fixed a problem for Broidy, arranging a $1.6 million payment to Shera Bechard, a former Playboy model who said she had been impregnated by Broidy during an extramarital affair. (Bechard said she had terminated the pregnancy.) At the time, Broidy, a married Beverly Hills venture capitalist, was a deputy finance chair of the Republican National Committee; he had raised a ton of money for Trump’s campaign and inauguration. And Broidy ‘fessed up, telling the Journal: “I acknowledge I had a consensual relationship with a Playboy Playmate. At the end of our relationship, this woman shared with me that she was pregnant. She alone decided that she did not want to continue with the pregnancy and I offered to help her financially during this difficult period.”

Then came a piece for New York magazine by law professor and blogger Paul Campos that presented the theory that l’affaire Broidy was something of a false flag. Noting that the nondisclosure agreement in the Broidy case was “very similar” to the NDA in the Trump-Daniels settlement—each one used the pseudonyms David Dennison and Peggy Peterson for the involved parties—Campos presented the “hypothesis” that Trump, not Broidy, had been the one who got Bechard pregnant.

Broidy, Campos speculated, had served as the beard for Trump in the $1.6 million hush-money deal. And what was Broidy’s motive for what might be “yet another audacious lie from Trumpworld”? Campos provided this explanation: “By stepping up to take responsibility for the affair and to fund the seven-figure settlement, Broidy was ensuring that he could continue to peddle his influence with Trump to governments around the world.” That is, Campos characterized the $1.6 million payment (which would come in installments) from Broidy to Bechard as a direct bribe from Broidy to Trump.

This was certainly whoa-if-true. And such a scheme could raise a host of legal issues. “This account—as bizarre as it may seem at first glance—is actually more plausible than the story leaked to the Journal,” Campos asserted. And he quoted the much-in-the-news attorney for Stormy Daniels, Michael Avenatti, remarking, “There are considerable and serious questions as to this alleged settlement. Many things about it simply do not appear to add up or pass the smell test.” Though Campos conceded that “we do not know if this alternative account, or something like it, is true,” his article drew plenty of internet attention and many giggles of delight from Trump critics who fervently wished it to be true.

As it happens, I have been looking into other (nonsexual) affairs of Broidy—involving his business deals—and have come across information that undercuts Campos’ supposin’. First, several folks who have worked with Broidy told me they do not believe he is the type of person who would take a bullet—and accept public humiliation—for Trump…or anyone else. Yes, that’s just opinion, and Campos argued that under his theory Broidy had the tough choice between admitting he had paid a seven-figure bribe to Trump or falsely claiming he had been Bechard’s tryster.

Then, I was introduced to another person with a particular insight into Broidy’s actions: a private investigator. In 2016, this PI, who requested he not be named, was hired to trail Broidy and surveil the businessman. His customer was a Broidy associate to whom Broidy owed money. The investigator spent several months on this case, looking to document Broidy’s lifestyle and spending patterns. He tells me that his big discovery was that Broidy was mostly a homebody who spent much of his time either at his office or his house.

But there was one other address Broidy visited regularly: an apartment building in Beverly Hills, where he seemed to have a girlfriend. The PI says he never got the name of the apparent gal pal, but he shared the building’s address with me. (For the obvious reason, I am not going to disclose it.) However, I was able to find the names of various tenants—a list that included Shera Bechard, the Playmate in the Broidy case.

This may not conclusively disprove the Campos hypothesis. But it does appear Broidy had a preexisting relationship with Bechard over a year before the $1.6 million settlement was reached. It’s possible Trump and Broidy each had an affair with her, although this piece of information does bolster Broidy’s account. (By the way, two unnamed sources “familiar with the matter” recently told HuffPost that Bechard has never met Trump.) Bechard did not respond to a voicemail left for her.

This improbable mess has become improbably messier, which could well mean that the official story might just be true.