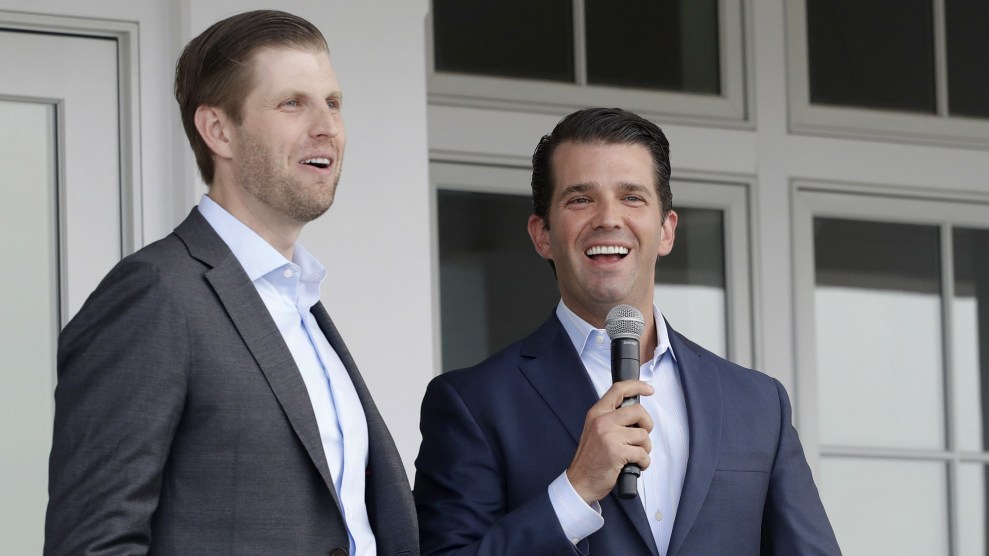 It’s not cheap to live like a Trump, and American taxpayers are finding out the hard way. Wherever Donald Trump Jr. and Eric Trump go, they are accompanied by an entourage of Secret Service agents. Taxpayers don’t pay for the Trumps to travel, but they do foot the bill for their protective details. These trips often include stays in high-priced, luxury hotels, such as the One&Only Royal Mirage in Dubai, where the Trump brothers jetted in February 2017 to meet with Hussain Sajwani, their business partner in a Dubai golf resort. On this trip alone, which included a side visit to the Maldives with Sajwani and his family, the Secret Service racked up $230,000 in travel costs.

The eye-popping expenses are contained in documents obtained under the Freedom of Information Act by watchdog group Citizens for Responsibility and Ethics in Washington. Extensive details of the Dubai trip’s itinerary—including arrangements for a seaplane to take the brothers and their protective entourage to private islands in the Maldives—are included in the records, which were released by CREW on Wednesday.

The Dubai visit was perhaps the most lavish trip the Trump have taken with taxpayer-funded protection, though it was hardly the only one. In January 2017, the Secret Service spent roughly $30,000 to accompany Eric Trump to the Dominican Republic, where he met with his father’s former business partners to explore reviving a collapsed resort project—despite a pledge from the president that his company would engage in no new foreign deals while he was in office.

According to the documents obtained by CREW, taxpayers shelled out more than $50,000 for a visit the brothers made to Vancouver, Canada in early February 2017 for the opening of a new Trump hotel there. More than half of those charges were paid to the Trump hotel. The documents also detail a trip to Uruguay by Eric Trump in January 2017, which cost taxpayers at least $97,000.

The trips documented by CREW, spanning only the early months of the Trump presidency, are just a snapshot of the travel undertaken by Trump’s sons. And they don’t include travel by other members of the Trump family, for instance a trip in June 2017 to Europe, apparently planned on the spur-of-the-moment, by Tiffany Trump (estimated Secret Service cost: $22,000). One or both Trump brothers have returned to Dubai at least twice—Donald Jr. visited in May 2017 to meet with Sajwani, and both brothers attended the wedding of Sajwani’s daughter this spring. Despite Donald Trump’s “no new foreign deals” promise, the brothers are currently working on opening a second golf course with Sajwani’s company, DAMAC. Sajwani has popped up at Mar-a-Lago on at least one occasion, and he attended Trump’s inauguration, where he and other foreign business partners were given VIP treatment.

On Donald Trump’s recent stopover in Scotland during his European trip last week, Scottish newspapers reported that the US State Department paid the president’s Turnberry golf course as much as $68,000 for hotel accommodations for the president and his staff. Attempting to deflect criticism, Eric Trump tweeted that his father’s company was not profiting off any business generated by his father’s visits to Trump properties.

Thanks @dmartosko. These people are so knowingly dishonest – while not required, we have decided that for any United States Govt business, we charge our COST and do NOT profit from these stays. Much more would be spent if they stayed elsewhere. #FakeNews #NoGoodDeedGoesUnpunished https://t.co/SBQLDCIsIB

The Trump Organization hasn’t previously revealed such a discount, but as the records obtained by CREW show, the taxpayers certainly aren’t getting any break when the Trumps travel.