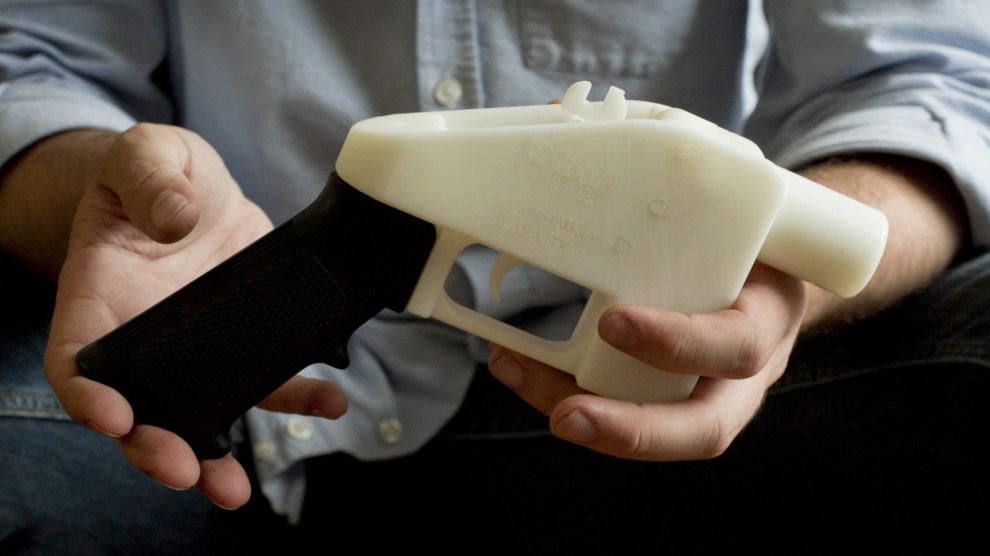 Cody Wilson with the first completely 3D-printed handgun at his home in Austin, Texas in May 2013.Jay Janner/TNS via ZUMA Wire

A district court judge in Washington State on Monday blocked the publication of blueprints for 3-D printed guns, a move cautiously heralded by the gun violence prevention movement as a promising development in what is expected to be an ongoing, drawn-out legal battle.

The ruling is a result of a suit filed by 20 attorneys general late last month against the State Department, which was poised to allow Defense Distributed, an open-source online host for digital firearms files, to publish plans for a 3-D gun online.

It is also the latest development in a years-long legal saga. In 2013, Cody Wilson, a self-described “crypto-anarchist” based in Texas, uploaded blueprints for the first-ever fully 3-D printed gun to defcad.com, the online host for Defense Distributed. A week later—after the files had been downloaded more than 100,000 times—President Obama’s State Department demanded Wilson take the blueprints down, citing violations of the International Trade in Arms Regulations, a relatively obscure trade directive that regulates weapon exports. Since 2015, Wilson and his co-plaintiffs have been mired in legal proceedings against the State Department, which Wilson claims stifled his free speech rights when it blocked his blueprints. Then, this past June, Trump’s State Department surprised gun safety activists by suddenly settling Wilson’s case and saying the digital materials could be made available for “public release (i.e. unlimited distribution) in any form” starting August 1. Shortly after, the state attorneys general sued.

3-D printed guns have been somewhat of a sleeper concern among gun safety activists and their congressional allies for the past several years. But the quick settlement of Wilson’s lawsuit was  particularly alarming because it happened just as the Trump administration was evaluating whether the regulation of firearm exports should shift from the State Department to the Commerce Department, which would streamline the licensing for gun exports and reduce the amount of oversight those exports received. The gun violence prevention movement viewed the State Department’s sudden pivot on Wilson’s case as confirmation that the administration would in fact move forward with what it considers dangerous deregulation.

National gun safety organizations like the Brady Campaign to End Gun Violence, Everytown for Gun Safety, and Giffords immediately got to work to halt Wilson’s plans  before the August 1 deadline. The three groups jointly filed legal action against Defense Distributed. When their efforts were dismissed due to a lack of legal standing, they enlisted the help of 9 Democratic attorneys general, who filed a temporary restraining order—which is the one the Washington State judge ruled on Monday. A total of 20 attorneys general from both major political parties eventually signed onto the suit. Brady and Everytown offered amicus briefs to support their case.

In his ruling, Judge Robert S. Lasnik pointed to an increasing threat of gun violence. He said American citizens have seen “the threat level of their daily lives increase year after year,” and listed off the 16 states that have been hosts to school shootings in the past two decades. “Plaintiffs have a legitimate fear that adding undetectable and untraceable guns to the arsenal of weaponry already available will likely increase the threat of gun violence they and their people experience,” he wrote.

Monday’s ruling keeps Defense Distributed out of the so-called “downloadable guns” business for now, but it does nothing to remediate the fact that the original blueprint had already been downloaded thousands of times before it was blocked, nor does it address the handful of other blueprints on the web. (In recent weeks, Facebook, Google, and Amazon all removed 3-D printing gun-related materials from their sites at the request of activists who drew the files to the tech giants’ attentions.) To that point, the judge noted that just because someone “will be able to find a file in the dark or remote recesses of the internet,” allowing Defense Distributed to share them adds to the ease by which a bad actor could find them.

The judge’s decision also by no means marks the end of the road for this case. The preliminary injunction simply prevents Defense Distributed from releasing the blueprints while the attorneys general try to make the injunction permanent. As they build their case, they may call upon more witnesses—including Secretary of State Mike Pompeo, who oversaw the decision to settle with Wilson—to testify in the case. And while today’s ruling, according to Giffords’ chief counsel Adam Skaggs, is a “pretty good sign” that the judge may lean toward permanently banning the blueprints, the State Department could appeal that eventual decision, which would put in motion a sequence of events that could land at the Supreme Court.

That potential eventuality troubles gun safety activists, who view Brett Kavanaugh’s likely Supreme Court confirmation as a setback for their progress. Kavanaugh’s past opinions as a DC circuit judge suggest his presence on the high court might increase its inclination to hear gun-related cases—which the Supreme Court hasn’t done in more than a decade—and rule in favor of gun rights.

In the meantime, gun control advocates continue to pursue other avenues to ban 3-D printed guns. Sens. Bill Nelson (D-Fla.) and Richard Blumenthal (D-Conn.) have both introduced bills that would ban the blueprints through law, though this pathway seems unlikely any time soon—both houses of the Republican-held Congress have refused to take up a vote on any gun reform legislation, even after the February school shooting in Parkland, Florida, that left 17 students and staff dead.

The gun reform groups also say there’s promise for technology companies to intervene. Chelsea Parsons, vice president of Gun Violence Prevention at the Center for American Progress, told Mother Jones that she sees the tech industry as part of the solution and that she is hopeful the creators of 3-D printers have strong enough incentives to not allow their technology to be used in this way. Several of the national gun safety organizations are in conversations with these companies to discuss potential solutions.

Skaggs agreed with Parsons, adding, “I think there is certainly a battle in the court of public opinion over corporate responsibility. To the extent the courts do not block this in a universal way, I think companies that might be used as platforms to make downloadable guns available will have to take a close look at their terms of use policies and how people use their web hosting services.”