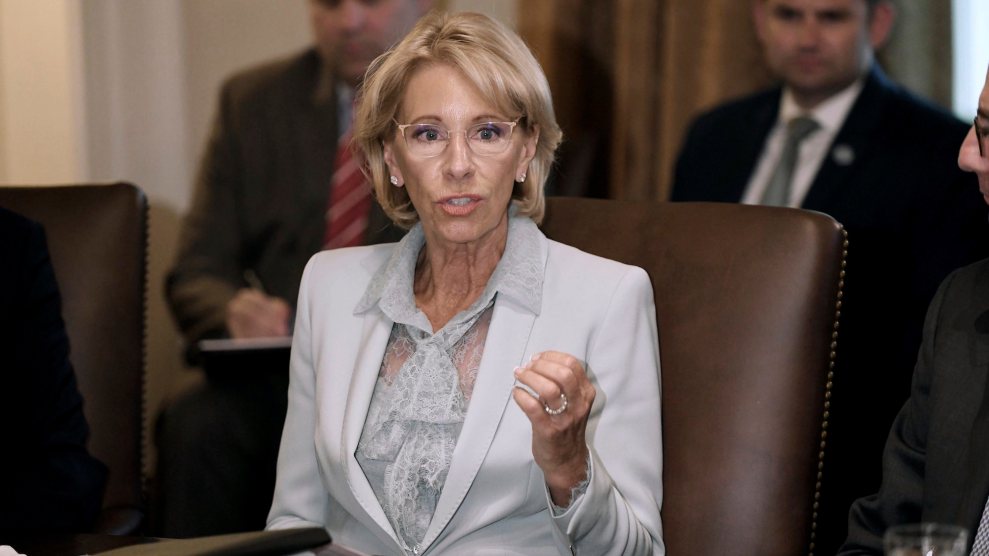 Education Secretary Betsy DeVos is considering new rules on campus sexual misconduct that would change the definition of sexual harassment on college and university campuses and raise legal standards for proving that schools mishandled complaints about sexual assault and harassment, according to a report published Wednesday by the New York Times.

The proposal leaked to the Times is not yet final, and would undergo a public comment period before taking on the force of law. An Education Department spokesperson said information about the contents of the proposal was “premature and speculative,” declining to comment further.

But according to the report, the regulations would codify many of the temporary rules on campus sexual assault and harassment that DeVos put in place last year after rolling back Obama-era protections for survivors of campus sexual assault. DeVos’ preliminary guidance, released last September, made it harder for survivors bringing sexual misconduct complaints to prove their case. They also allowed institutions decide whether decisions could be appealed. Both measures appear in the new, leaked regulations, according to the Times, along with rules allowing accused students to cross-examine their accusers and for schools to use “mediation,” rather than a formal disciplinary hearing, to resolve complaints.

The proposed rules would also let universities off the hook for responding to sexual misconduct that takes place off-campus, or to complaints that aren’t made through formal channels, according to the New York Times. Here are some more of the specifics from the report:

The new rules would adopt a new Supreme Court definition of “sexual harassment” that appears to be reserved for repeated complaints or the most egregious allegations. The new rules would define sexual harassment to mean “unwelcome conduct on the basis of sex that is so severe, pervasive and objectively offensive that it denies a person access to the school’s education program or activity.”

The new rules would require that institutions only be held legally responsible for investigating formal complaints and responding to reports that school officials have “actual knowledge” of happening. A formal complaint is one made to “an official who has the authority to institute corrective measures,” not, for instance, a residential adviser in a dormitory.

The regulations go to great lengths to require impartiality in investigations. They call on schools to conduct objective investigations and provide “prompt and equitable” resolutions. And, for the first time, the administration explicitly says that just as an institution’s treatment of a complainant could constitute sex discrimination, so would the treatment of the accused.