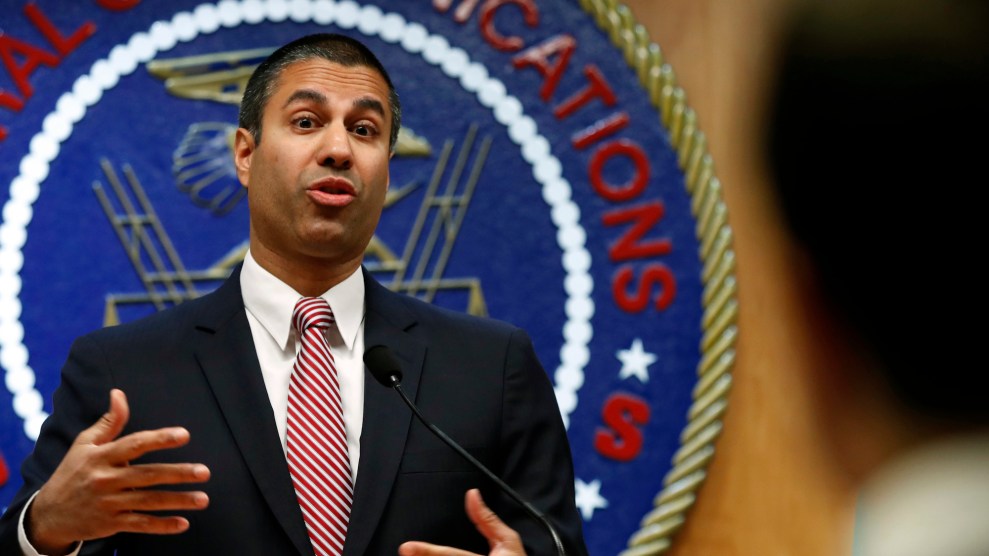 An inspector general’s report found “no evidence, nor even the suggestion, of impropriety, unscrupulous behavior, or favoritism,” the Federal Communications Commission announced Monday, by Chairman Ajit Pai, who had pushed through rule changes favoring Sinclair Broadcast Group’s ultimately unsuccessful merger with Tribune Media.

The 69-page report is the result of a nearly yearlong investigation into Pai, who has a long history of professional and personal connections with Sinclair. But the report left unanswered questions about communications between Pai, his staff, and stakeholders before and during the attempted merger.

[Berry] received a one sentence text from Rebecca Hanson on his personal cell phone wherein she noted her [approval] of a statement made by the Chairman in a Congressional hearing (BERRY did not recall the date of this text message). BERRY does not recall having any substantive phone calls with representatives of Sinclair, including any lobbyists and lawyers representing Sinclair.

The report also provides insight into Pai’s relationship with the Trump administration. Pai maintains that Sinclair never came up in his private meetings with the president either during the nomination process or after he became chairman. But the IG’s report says Pai was unable to recall the content of a conversation he had with Jared Kushner in May 2017, five months after Pai met with Trump and then-adviser Peter Thiel at Trump Tower. By November, the FCC had voted to change its media ownership rules, clearing a key obstacle for the $3.9 billion Sinclair-Tribune merger.

“I have called on the FCC for many years to update its outdated media ownership regulations to match the realities of the modern marketplace,” Pai said in press statement Monday. “As I said when this investigation was first announced, the suggestion that I favored any one company was absurd, and today’s report proves that Capitol Hill Democrats’ politically motivated accusations were entirely baseless.”

But there were additional communications Pai failed to reveal, according to the Inspector General’s report. In late July, he told a House oversight committee that the White House never contacted him about the FCC’s decision to have an administrative law judge review the Sinclair-Tribune merger. But at a Senate hearing August 16, Pai acknowledged he’d received a call one month earlier from White House Counsel Don McGahn, who wanted to discuss the merger’s status. (The report calls Pai and McGahn “long-time acquaintances.”)

Democrats were not at all appeased by the report. “It should not take an IG investigation to get answers to basic questions regarding independence and integrity,” Rep. Frank Pallone (D-NJ), a ranking member of the House Energy and Commerce Committee, said in a statement. “Questions remain regarding the Chairman’s personal communications, which the IG noted were beyond his reach, and his conversations with Jared Kushner and Don McGhan. I’m glad the IG confirmed he will conduct an additional forensic examination on communications with the White House.”