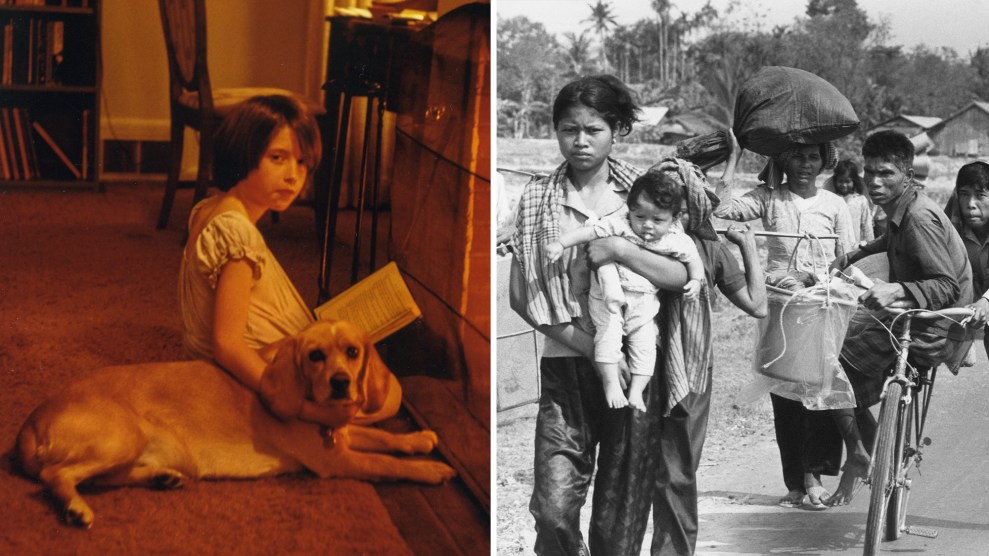 After the Cambodian genocide began in 1975, my mom started taping pictures and headlines to our dining room wall. Mrs. Paul’s fish sticks and photos of the killing fields are what I remember about those meals. “We have to do something,” she said.

She started sponsoring refugees when I was maybe nine. We were clueless white people. There was no real preexisting Cambodian community in the Washington, DC, area. Our first refugee’s husband and baby had been killed. Something about a helicopter. She lived with us for two years, with no one to talk to in Khmer, much less her indigenous language. She was maybe 30 but needed a full set of dentures. She did not seem to be able to read or write much, but then how could we really tell? “Talking to the mommy!” she’d warn my little brother and me when we misbehaved. “Talking to the mommy, talking to the mommy,” we’d taunt back. She slept in a tiny bedroom next to mine. Sometimes I could hear her cry at night. She looked so longingly at my Japanese geisha doll that I gave it to her. Eventually she met a Cambodian man. A refugee, also. He brought us bread from the bakery where he worked. Roaches ran out of the bag, and we pretended not to notice. She was by now part of our family. How could we be sure he’d be a good husband? “At least she’ll have someone to talk to,” my mom said.

Nobody ever lived with us for so long again, but many more refugees followed. Until my mother and other grown-ups in our Quaker meeting could help them find housing and jobs, they lived in the basement of our small home with my brother and me; sometimes we had to teach kids how to use a toilet. “You show him—you’re a boy, he’s a boy!”

They had all come to a country where even the openhearted were often perplexed or powerless to help them navigate.

Many had endured unspeakable trauma. One toddler had a crease across his nose from a bullet. Mass graves. Rapes. Camps. Some were peasants. Some were highly educated but had destroyed their papers and their glasses to avoid being slaughtered by the Khmer Rouge and now had to start all over and come to terms with never being a doctor or a professor again. More women than men had survived; now they had to head families in a new country. There was sometimes drama within families and between them, and with the Viet­namese refugees who often became their neighbors in Arlington’s now all-but-­vanished Little Saigon neighborhood. They had all come to a country where even the openhearted were often perplexed or powerless to help them navigate. That additional trauma took its toll on each of them, some in more obvious ways than others. And it took its toll on my family too. (Here is where I usually insert the bit about my brother once serving in the Border Patrol.) But we were better for what they showed us about the capacity for healing. And they mostly did fine to outstanding.

I reprised some of this history during the 2016 campaign, after Donald Trump Jr., commenting on Syrian refugees, tweeted a picture of Skittles with this caption: “If I had a bowl of skittles and I told you just three would kill you. Would you take a handful?” He added, “This image says it all. Let’s end the politically correct agenda that doesn’t put America first. #trump2016.”

“Skittles are candy. Refugees are people,” a company spokeswoman replied. Other commentators made fun of Trump Jr.’s statistical acumen. But I grew up seeing hatred of refugees up close. “Chink” and “gook” and accusations regarding US casualties in Vietnam. When people show you who they are, believe them; it’s likely so much worse.

And it is. Now there can be no denying that this is an administration hell-bent on a policy of white supremacy. One that will claim tiki-torch Nazis are “very fine people,” one that will seize toddlers, transport them hundreds of miles away from their parents, parents who, if ever reunited with their children, may find them in shock, traumatized, or covered with lice. An administration that has slashed the already woefully small number of Syrian refugees admitted to the United States, from 15,479 in 2016 down to 17 so far this year. An administration that cut the number of refugees admitted from any country from 111,000 in 2016 to 45,000 last year, and now plans to halve that number again. One that says fleeing from murderous gangs or murderous husbands is not grounds for asylum. One that—and this is not unique to President Donald Trump’s team—ignores the role that US actions have had in causing a refugee crisis, and is blind to the fact that refusing to help desperate people perpetuates cycles of violence and terrorism. Richard Nixon and Henry Kissinger carpet bombed Cambodia as part of an attempt to achieve “peace with honor” in Vietnam. Maybe 50,000 Cambodians died as a result. Maybe 150,000.

America is certainly no stranger to paroxysms of violent racial backlash; but if ever America was or will be great, that greatness is due to diversity.

I could go on and on about the self-blinkered inhumanity of blocking entry of those fleeing to our shores. But let’s not forget the loss to those of us who are already here. Study after study shows that schools do better, teams do better, corporations do better when cultural and ethnic diversity is at their core. America is certainly no stranger to paroxysms of violent racial backlash; but if ever America was or will be great, that greatness is due to diversity. It’s what Mother Jones readers believe too—we’ve heard from many of you who are gutted by the child separation policy and have asked us to redouble our efforts to tell the deeper stories of immigration and demonization. And we are.

The last time I saw any of the refugees who lived with us was a few years after I graduated from college. My parents were splitting up, but we didn’t tell the Cambodian family that we would soon leave the house where they had stayed so long ago. It was the boy with the crease in his nose and his sister, now soon off to college themselves, and their parents. My brother and I sat with the kids and shared what we remembered of our time together. They brought us an oil rain lamp, a gold goddess twirling in the middle of plastic foliage as drops of oil ran down the filaments that surrounded her. “Thank you. It’s so beautiful,” my brother said. And it was.