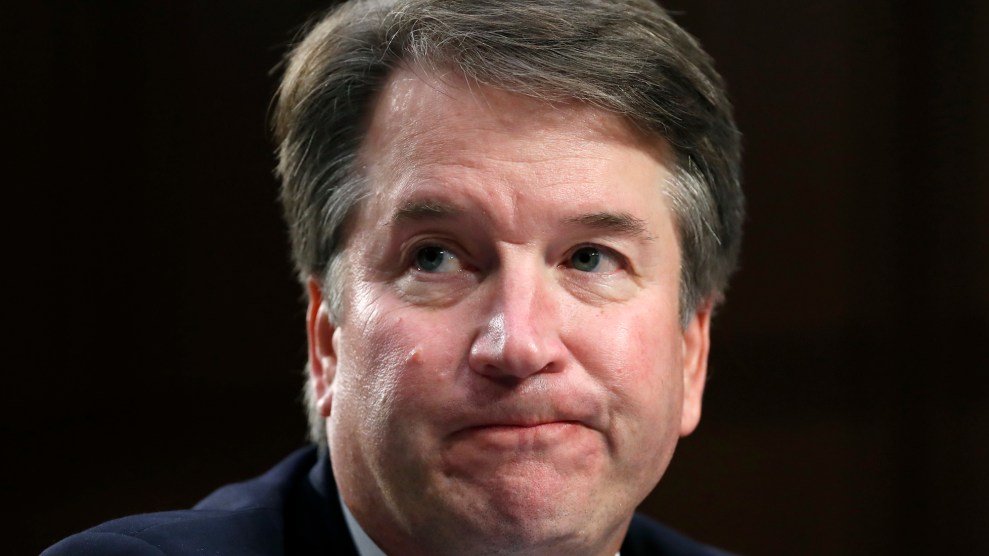 Earlier this week, reports emerged that Capitol Hill Democrats had a letter from a woman accusing Supreme Court nominee Brett Kavanaugh of sexual misconduct when they were both in high school. The letter, since handed over to the FBI, reportedly describes an incident that allegedly took place in the Washington, DC, area, when Kavanaugh was a student at Georgetown Prep, a tony all-boys school.

The New Yorker reported the woman wrote in her letter that “during an encounter at a party, Kavanaugh held her down, and that he attempted to force himself on her. She claimed in the letter that Kavanaugh and a classmate of his, both of whom had been drinking, turned up music that was playing in the room to conceal the sound of her protests, and that Kavanaugh covered her mouth with his hand.” Kavanaugh has denied the allegations.

Kavanaugh’s friend describes an institution where alcoholism was rampant.

The New York Times reported that the friend the woman alleged was in the room with Kavanaugh was conservative writer Mark Judge, who attended Georgetown Prep with the nominee. On Friday, Judge told the Weekly Standard no such incident took place. “It’s just absolutely nuts,” he said. “I never saw Brett act that way.”

In his opening statement at his confirmation hearing this month, Kavanaugh referenced his time at the Catholic institution with great reverence: “The motto of my Jesuit high school was ‘Men for others.’‌  I’ve tried to live that creed.”

But the school Judge has described in his books is a very different sort of place. In his 2005 book, God and Man at Georgetown Prep, which is now out of print, Judge apparently paints the school as overrun with gay priests who promote a form of liberalism that wrecks Catholic education. He also describes an institution where alcoholism was rampant, a theme he detailed in his 1997 addiction memoir, Wasted: Tales of a Gen X Drunk.

That book chronicles Judge’s time as a teenage alcoholic. Like many works of the genre, it devotes a lot of ink to the kinds of debauchery that leads to Alcoholics Anonymous and recovery. While there’s nothing in the book that resembles the incident reportedly described in the private letter given to the FBI, Judge says his own blackout drinking while he and Kavanaugh were Georgetown Prep students “reached the point where once I had the first beer, I found it impossible to stop until I was completely annihilated.”

He describes, for instance, what happened after a night of heavy drinking with friends at a Georgetown bar. “The next thing I knew, I was lying on a bathroom floor. I was curled up in the fetal position with saliva running out of the side of my mouth,” Judge writes, explaining that he had inexplicably woken up inside a nearby Four Seasons Hotel. He writes that he called his mom for help getting home. “I must have come over here and passed out,” he tells her.

The amount of drinking Judge describes himself undertaking might suggest his memory of those days may not be entirely reliable.

In Judge’s telling, Georgetown Prep students were forced to do community service, not because of the school’s commitment to the poor, but as a way to try to curtail late-night drinking and Sunday morning hangovers. Judge and his buddies spent a lot of time in the book trying to get laid, but that’s nothing unusual for a story about high school boys.

Judge has changed the names of many people in the book to protect their privacy, and he renames Georgetown Prep as “Loyola Prep.” But Kavanaugh seems to make a cameo. Consider this passage:

Judge, who did not respond to a request for comment, has been published in the Daily Caller, the American Spectator, and other right-wing outlets. He has attacked many journalists in print over the years, including my husband, Washington Post media critic Erik Wemple. (In those posts he has also taken swipes at me, labeling me a “pro-abortion writer for Mother Jones.”) He has frequently taken to the web to criticize the late David Carr, who was the Washington City Paper editor when Judge occasionally freelanced there.

Judge’s more controversial writings include a 2012 Daily Caller column about his bike getting stolen and the “very high odds” the thief was a black man. A piece he wrote in 2006 on PoliticalMavens.com starts out with an incendiary question: “You’re thinking it even if you don’t say it: Are gay people perverts?”

The Senate Judiciary Committee’s final vote on Kavanaugh is scheduled for Thursday. Republicans hope he will be confirmed by the full Senate to a lifetime appointment on the Supreme Court later this month, before the justices begin considering new cases in October.