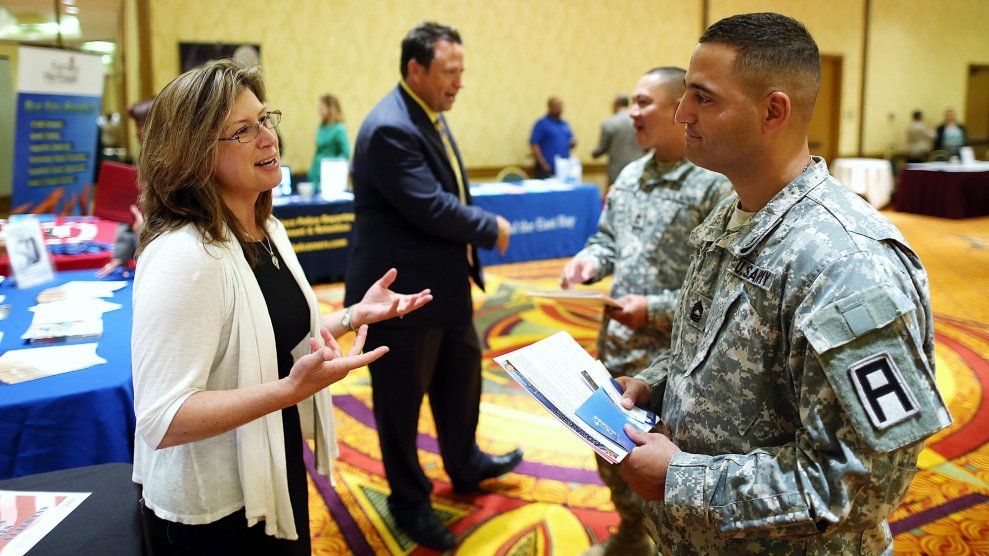 Months after Donald Trump promised a “great rebuilding of the Armed Forces,” the Army said that it had missed its recruiting goal for the first time in over a decade. It had aimed to enlist 76,500 new members this year but missed the mark by about 6,500 soldiers. “The Army National Guard and Army Reserves also fell far short of their goals, by more than 12,000 and 5,000 respectively,” the Associated Press reported last week.

In order to boost its recruitment figures for the fiscal year ending on Sept. 30, Army officials spent $200 million on enlistment bonuses and issued a historically high number of waivers for recruits with a history of drug use and health problems. After granting just 191 waivers for marijuana use in 2016, the Army issued more than 500 this year. The AP noted the number was “significantly higher than the other three military services, and represents a steady increase over the past three years.” The Marine Corps, Navy, and Air Force have all met their quotas for the year.

Army officials attributed the lower enlistment figures to the strength of the economy and increasing competition from the private sector. The New York Times reported that the devastation caused by Hurricane Maria in Puerto Rico, a typically fertile recruiting area, also played a role in reducing recruitment figures.

“As we look to 2019 and beyond, we have laid the foundation to improve recruiting for the Army while maintaining an emphasis on quality over quantity,” Army Lt. Col. Emanuel L. Ortiz told the Times. “Our leaders remain confident we will achieve the Army Vision of growing the regular Army above 500,000 soldiers.”

Seven days after taking office, Trump signed an executive order to boost the readiness” for all branches of the armed services and promised to increase the size of the Army, the military’s largest branch, to 540,000 soldiers. During the Obama administration, that figure had plummeted to its lowest total since the early part of the 20th-century. Congress had ordered the Defense Department in 2016—against Obama’s wishes—to grow the Army to 476,000 service members.

In an era when few people use landlines or respond to telemarketer calls, Army Maj. Gen. Joe Calloway told the AP that Army recruiters needed to modernize their approach. “Nobody wants to talk to us,” he said. “If we do get ahold of a potential recruit, they actually don’t want to talk to you on the phone, what they want to do is meet you online first in some type of digital format and then, if they agree to meet with you, you can get the phone call.”  To reach the cord-cutting generation, Army recruiters have started to appear at millennial-friendly events like video game tournaments and “CrossFit sports competitions,” the AP reported.

This is not the first time that economic prosperity has led to a shortfall in Army recruitment numbers. In 1998, the height of the dot-com boom, “DOD did not meet its overall recruiting goal for enlistees,” a Government Accountability Office report found. The way the Army responded, according to the New York Times, is nearly identical to the approach it is taking now: “doubling its recruiting budget, adding enlistment bonuses up to $20,000, and allowing enlistees it would have turned away in the past, such as those who had no high school diploma.”