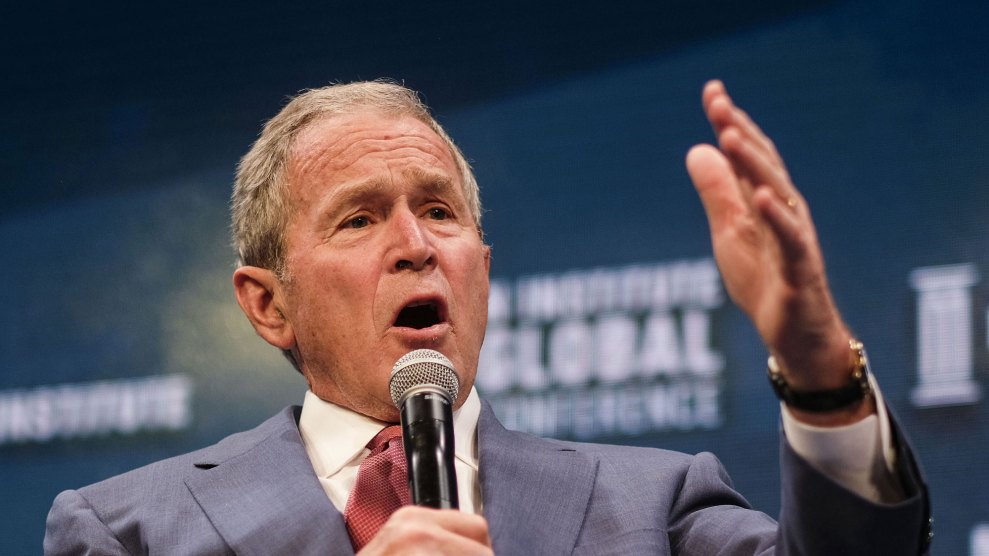 On Thursday evening, just hours after Christine Blasey Ford’s gut-wrenching testimony about being sexually assaulted by Brett Kavanaugh, the Washington Post reported that a familiar face was lobbying Republican senators to forge ahead on the nomination—former President George W. Bush. In an interview with McKay Coppins of the Atlantic, Sen. Jeff Flake (R-Ariz.) confirmed he’d spoken with Bush about his vote:

Flake confirmed to me that George W. Bush called him “and a number of” his colleagues to lobby on behalf of Kavanaugh. https://t.co/7O6I4TnXdQ pic.twitter.com/aACSQRkHNm

The nation’s 43rd president left office nine years ago in the midst of the worst economic crisis of the last half-century. His foreign policy agenda had resulted in a series of horrific, expensive, and unending wars—one of which is now old enough to enlist itself. He sanctioned torture while wrapping his administration in a warm embrace of faith-based discrimination.

The best that could be said—and it’s not nothing, truly—is that he left quietly, and for eight years during President Barack Obama’s presidency, stayed quiet. He went to a lot of baseball games. He did not publicly support Donald Trump ahead of the 2016 presidential election. When he did show up to the inauguration in January 2017, he reportedly turned to Hillary Clinton and said, “That was some weird shit.” At the funeral for Arizona Republican Sen. John McCain—whom Bush allies had once accused of having fathered an illegitimate child with a black woman—Bush offered Michelle Obama a piece of candy.

For these reasons, Bush is in the midst of, as the literary types like to say, a critical reexamination. His approval ratings have ticked steadily upward. A recent survey showed a majority of Democrats viewed him favorably. Key figures in his administration have returned to the good graces of polite political society, if any of them ever left, by frequently scolding Trump.

Far from being a part of any resistance to Trump, Politico reported earlier this month Bush would hold a series of fundraisers for embattled House and Senate Republicans—to help ensure, in other words, there will be no meaningful checks on the current administration’s excesses. He can’t be too concerned with the politicization of the Justice Department anyway; one of his administration’s biggest scandals involved the politically motivated firing of US attorneys.

Now he’s lobbying senators for a man who appears to have misled the Senate repeatedly on key details of his personal and professional life, in part because Kavanaugh had worked in the Bush White House. Americans have always had a problem with historical memory. But if Democrats have forgotten who George W. Bush is, he finally seems comfortable enough with his standing to remind them.