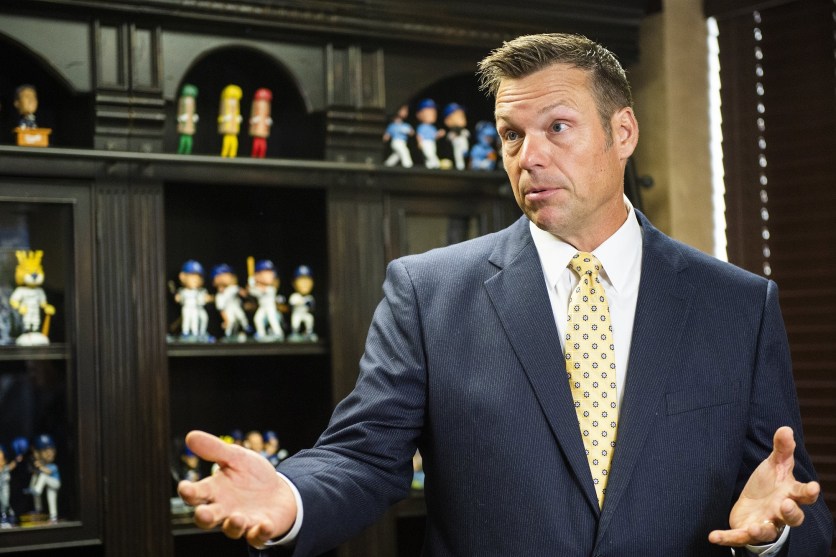 Kansas Sectary of State Kris Kobach, at a press conference in Kansas, after President Donald Trump endorsed him for Kansas governor ahead of the August primary.Shelly Yang/ZUMA

The Kansas Supreme Court is allowing a citizen-initiated investigation of Kansas Secretary of State Kris Kobach to proceed. The grand jury investigation will focus on whether Kobach, a champion for restrictive voting laws and anti-immigrant policies, mishandled voter registration information in the 2016 election, the Lawrence Journal-World reported on Friday.

Kobach narrowly defeated Jeff Colyer last month to become the Republican nominee for Kansas governor in this November’s election. He will now have to run for office while being investigated for whether his office was “grossly neglectful with respect to their election duties,” and engaged in “destroying, obstructing, or failing to deliver online voter registration.” Kobach denies the allegations.

The call for the investigation of Kobach began in 2016 with a petition from Steven Davis, a Democrat who unsuccessfully ran for state house in 2016 and 2018. Davis alleged that Kobach intentionally failed to register voters who tried to do so online in 2014. His petition was initially rejected by a state district court due to a lack of evidence. He filed a new petition in August 2017 after the Kansas state legislature allowed people to appeal petitions that are rejected.

The district court rejected Davis’ petition again, but a Kansas appeals court reversed the district court in June by ruling that it mistakenly required “specific allegations of a crime, when only general allegations are required by the statute.” On Friday, the Supreme Court denied Kobach’s request to review the appeals court decision, meaning that a grand jury will be summoned.

In 2016, Davis, who was working as a freelance copy editor, said he didn’t have hard evidence to back up the allegation that Kobach’s office committed election fraud in 2014. “As a private citizen there’s no way for me to actually get real evidence, but I could, however, circulate this petition,” Davis said. “…I do think there will be evidence. Now whether there’s enough to bring an indictment, it’s up to the grand jury.”

Kobach rose to national prominence as the architect of Arizona’s extreme anti-immigrant bill, SB1070, in 2010…As secretary of state, Kobach pushed a voter ID law that required documentary proof of citizenship in order to vote. Kobach humiliated himself earlier this year when he defended that law in court; not only did he lose, but his team made so many basic legal errors that the judge ordered him to take six hours of continuing legal education on how to present evidence at trial.

Last year, Trump made him vice-chair of the president’s commission on election integrity, which Trump convened following his unfounded assertion that millions of people had voted illegally in the 2016 election. In January, Trump disbanded the commission, which was under siege from multiple lawsuits from government watchdogs and voting rights advocates. Documents released earlier this month show that Kobach and the other voter fraud alarmists on the commission were trying to document the threat of voter fraud even though they’d found no evidence.

In 2016, Kobach defended the grand jury law after Davis targeted him. “The law doesn’t permit randomly going after a public figure with vague allegations unsupported by any facts,” he said before adding. “I actually think our law is excellent.”

Kansas is one of six states that allows citizens to request a grand jury investigation. State law requires a petitioner to obtain the signatures of 100 voters plus 2 percent of voters in the county who voted in the previous gubernatorial election, according to the Kansas City Star. The law is designed to allow the public to force investigations of matters that prosecutors have been unwilling to pursue.

In 2012, Kansans organized by the American Family Association, a Christian fundamentalist group, used the law to investigate whether a bronze of a mostly nude woman taking a selfie violated state obscenity law. The grand jury decided within a day that no indictment was needed. The American Civil Liberties Union labeled the case “Citizens of Johnson County v. Two Bare Breasts.” Lee Rowland, a senior ACLU staff attorney, wrote, “The AFA’s repeat attempts to morph art into obscenity perfectly illustrate the constitutional risk in turning the criminal justice system over to private citizens.”

The Kansas appellate court acknowledged the risk of the state’s grand jury law when it approved the Kobach investigation in June. “We are mindful that the mere calling of a grand jury directed at the actions of a public official or a private individual without probable cause to believe a crime has been committed and without the guiding hand of a professional prosecutor can have serious personal and professional consequences,” the ruling said.

“But the Kansas Legislature has determined that it wants to provide for citizen-initiated grand juries and it wants them to have broad powers to investigate possible criminal activity. The wisdom of this law is not a concern of our court.”