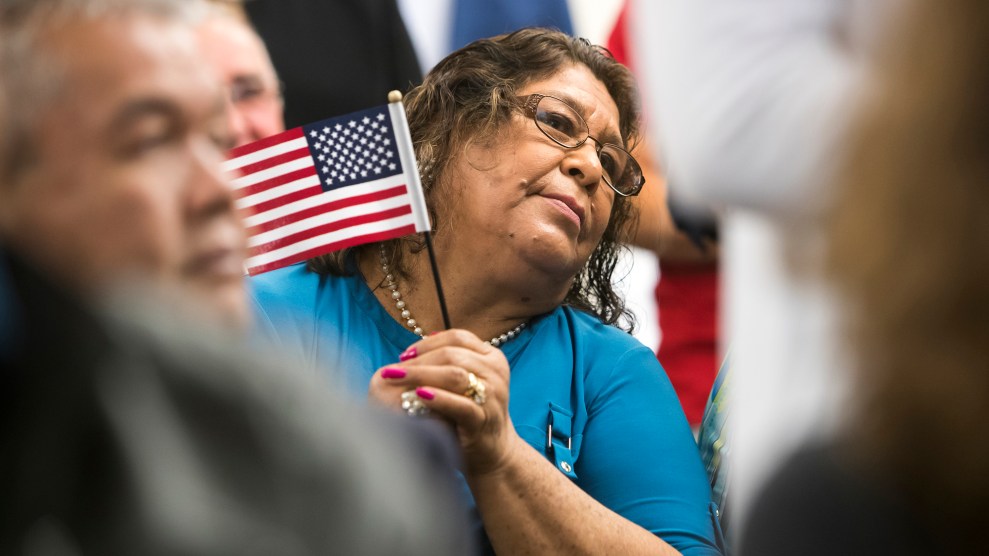 Marina Alejandre, an immigrant from Mexico, waits for her country to be called at a naturalization ceremony in Tampa, Florida, in December 2017.Monica Herndon/AP

When the Trump administration’s draft guidelines for reinterpreting who is eligible for green cards leaked earlier this year, one provision looked like a nightmare for immigrant parents: Anyone whose children received benefits like nutrition assistance for infants could be denied permanent residency. Instead, when the proposed guidelines were released on Saturday, the Department of Homeland Security removed that provision, meaning that fewer immigrants are likely to be penalized for past use of public benefits. But behind the official language is a potentially more damaging phenomenon—that fear and confusion surrounding the rule will cause many fewer immigrants to sign up for benefits even when their legal status isn’t actually at risk.

The 447-page regulation reinterprets a 136-year-old measure that blocks many immigrants from coming to the United States if they are likely to become “public charges.” The proposed rule, which will be subject to 60 days of public comments once it is published in the federal register, dramatically expands the definition of public charge, gives immigration officials broad discretion to deem people likely public charges, and directs them to favor wealthier immigrants. Robert Greenstein, the president of the left-leaning Center on Budget and Policy Priorities, argues in a blog post that the regulation would “essentially put a price tag on obtaining legal U.S. residency” at the expense of the upwardly mobile immigrants who have come to the United States for centuries.

Yet if past experience is any indication, many permanent residents will still stop using public benefits programs like food stamps. Immigrant advocates fear that those chilling effects could be the rule’s most important impact. Mark Greenberg, a senior fellow at the Migration Policy Institute, says “there’s much reason to believe the chilling effect will be greater than the direct effects.”

As Mother Jones reported earlier this month, the effort to block people who are likely to become public charges from entering the United States dates back to state laws designed to keep out Irish migrants fleeing the potato famine. In 1882, America’s first comprehensive immigration law included a public charge provision based on state laws that Massachusetts and New York used to target the Irish.

Fear and confusion surrounding the rule could cause many fewer immigrants to sign up for benefits even when their legal status isn’t actually at risk.

The current public charge regulations come from a 1999 guideline from US Citizenship and Immigration Services, the DHS agency responsible for legal immigration, that defines public charges as people who are likely to receive more than 50 percent of their income from government cash assistance. DHS now wants to label people public charges if they are likely to receive public benefits worth more than 15 percent of the federal poverty line, or about $1,800 per year for an individual. Medicaid and some other benefits whose cash value is harder to calculate would also be considered. Using public benefits before the rule is made final would not count against immigrants.

But DHS is also directing immigration officials to consider a wide range of biographical information when assessing whether someone is likely to become a public charge by using those benefits. The rule lists negative factors that make people likelier to become public charges, including poor health, bad credit scores, a lack of higher education, having many children, or being younger than 18 or older than 61. If people meet any of those criteria, under the new rule, they would be less likely to receive a green card.

Earning or having assets worth more than 250 percent of the federal poverty line would be the rule’s only “heavily weighed positive factor.” But the rule contains no formula for weighing positive factors against negative ones.

Erin Quinn, a senior staff attorney at the Immigrant Legal Resource Center, say the rule would add a “ton of ambiguity” and confusion for immigrants trying to figure whether they are likely to be deemed public charges. David Bier, an immigration policy analyst at the libertarian Cato Institute, argues that it would be an “entirely arbitrary” system. “Under this rule, no immigrant will know before they apply whether they qualify,” he wrote on Cato’s website.

Last year, President Donald Trump called for making immigrants wait at least five years before receiving welfare. That was already the law: Legal immigrants generally need to be permanent residents for five years before receiving federal benefits, although there are some state-level exceptions. (Undocumented immigrants are blocked from receiving almost all public benefits.) But Trump’s announcement, might be part of a broader White House strategy. Politico reported earlier this month that the White House sees the public charge plan as a way to motivate its  base before the midterm elections.

History suggests that the rule will cause large numbers of immigrants who already have green cards to forgo benefits that they are eligible for and would not be penalized for using. In 1996, President Bill Clinton signed the welfare reform law that created the five-year waiting period for receiving public benefits. Between 1994 and 1997, immigrants’ use of public benefits dropped sharply, and the decline extended to US-born children of immigrants who were still eligible for assistance. A 1999 Department of Agriculture analysis found that food stamp participation dropped by 37 percent among American children living with immigrant parents following welfare reform, compared to 15 percent for children with US-born parents. A similar study by the nonpartisan Urban Institute found that refugees’ use of public benefits dropped as quickly as that of non-citizens during that period, even though the law exempted refugees. (Refugees and asylum-seekers fleeing persecution would remain exempt from public-charge determinations under the rule and could still receive federal benefits as soon as they obtain legal status.)

DHS’s own proposal lists some of the negative consequences that could result if the public charge rule causes people to drop out of federal programs. They include: more reliance on emergency rooms for primary care; an increase in the spread of communicable diseases; higher rates of malnutrition, particularly for pregnant mothers, infants, and children; reduced productivity; and more poverty. There were already signs of those chilling effects before the rule was announced. Politico reported earlier this month that immigrant families were dropping out of WIC, a nutrition program that helps pregnant women and young children, due to fears about the public charge rule. (Unlike leaked drafts, the rule released on Saturday does not list WIC as a public benefit that DHS will consider in public charge decisions.)

Tanya Broder, a senior staff attorney at the National Immigration Law Center, points out that the drop reported by Politico was coming from only a leaked draft, not a formal rule. “The chilling effect is real, and it’s greater now when people are scared to death about all the immigration enforcement and the family separation,” she says. “It’s a parade of horrors.”