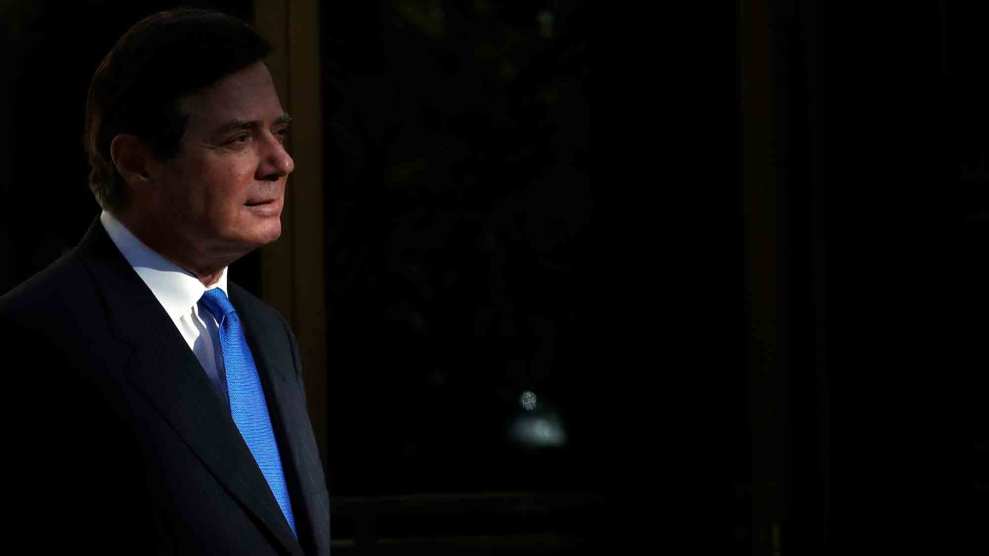 On Friday morning, special counsel Robert Mueller released a “superseding criminal information”—essentially a new indictment of Paul Manafort, the former Trump campaign chief. Soon after, Manafort appeared in federal court to cop a plea—in a deal that includes cooperation with Mueller—to avoid a second trial involving charges of fraud, tax evasion, and money laundering. And this latest filing was Mueller’s way of presenting to the public the case he and his prosecutors were prepared to lay out in court. The document describes in detail a comprehensive and long-running criminal conspiracy mounted by Manafort, who was found guilty of eight counts of bank and tax fraud in a recent trial, to hide the covert lobbying campaign he managed for a corrupt and pro-Putin political party in Ukraine and to keep secret the millions of dollars he collected for his mighty efforts. The document ends with two counts to which Manafort has now admitted guilt: conspiracy to defraud the United States and conspiracy to obstruct justice.

The new information recounts a melange of deception, chicanery, and skullduggery, with Manafort orchestrating lobbyists, lawyers,  and politicians in the United States and around the globe on behalf of the party of Ukrainian leader Viktor Yanukovych (who fled Ukraine for Russia in 2014) and encouraging them all to lie about who was pulling the strings: Manafort and his Ukrainian paymasters. The case is strong, and Mueller’s team seemingly caught Manafort in a multitude of lies. The information basically covers all the charges Manafort faced in both trials. That is, by agreeing to this, Manafort is saying, everything Mueller alleged was true, this was no witch hunt, he got me, I was a big-time criminal.

The document is also studded with new details—examples and anecdotes that Mueller’s prosecutors probably expected to display before the jury. One of these stories involve a Manafort effort in October 2012 to whip up “[O]bama jews.”

At the time, a top priority of Manafort was discrediting Yulia Tymoshenko, a  political foe of Yanukovych. She had lost the 2010 presidential election to Yanukovych and the following year was arrested and imprisoned by his government. Much of Manafort’s clandestine campaign at this time focused on defending the Yanukovych regime’s handling of the Tymoshenko case, which drew international criticism. For instance, according to this filing, Manafort directed lobbyists “to write and disseminate within the United States news stories that alleged that Tymoshenko had paid for the murder of a Ukrainian official.”

In addition, the information notes, Manafort “orchestrated a scheme to have, as he wrote in a contemporaneous communication, ‘[O]bama jews’ put pressure on the Administration to disavow Tymoshenko and support Yanukovych.” The document states:

MANAFORT sought to undermine United States support for Tymoshenko by spreading stories in the United States that a senior [Ukrainian] Cabinet official (who had been a prominent critic of Yanukovych’s treatment of Tymoshenko) was supporting anti-Semitism because the official supported Tymoshenko, who in turn had formed a political alliance with a Ukraine party that espoused anti-Semitic views. MANAFORT coordinated privately with a senior Israeli government official to issue a written statement publicizing this story. MANAFORT then, with secret advance knowledge of that Israeli statement, worked to disseminate this story in the United States, writing to [lobbyist] Person D1 “I have someone pushing it on the NY Post. Bada bing bada boom.”

This is some creative undercover lobbying—Manafort schemed with an Israeli official to put out a statement about a Ukrainian politician that could be the basis of a story slipped to the New York Post that could then be used to influence “Obama Jews.” The information notes, “MANAFORT sought to have the [Obama] Administration understand that ‘the Jewish community will take this out on Obama on election day if he does nothing.'” Who was the Israeli official? Did Manafort or the Ukrainians pay this official? The filing doesn’t say.

And there was more to this particular plot. According to Mueller’s team, Manafort instructed one of his American lobbyists to tell the Obama White House that Yanukovych’s government had somehow worked to prevent “the Administration’s presidential opponent”—presumably the Mitt Romney campaign—from including language in the Israeli statement that would have been “damaging” for Obama. As the information puts it, this was an effort to “ingratiate Yanukovych with the [Obama] Administration.”

This Mueller filing opens a wide window into the ultra-swampy world of international lobbying and disinformation. It is a case study in sleaze, and the man at the center of it shares responsibility for the election of Donald Trump. Moreover, Manafort is now a cooperating witness for Mueller, and there is no telling yet what other stories he will share.