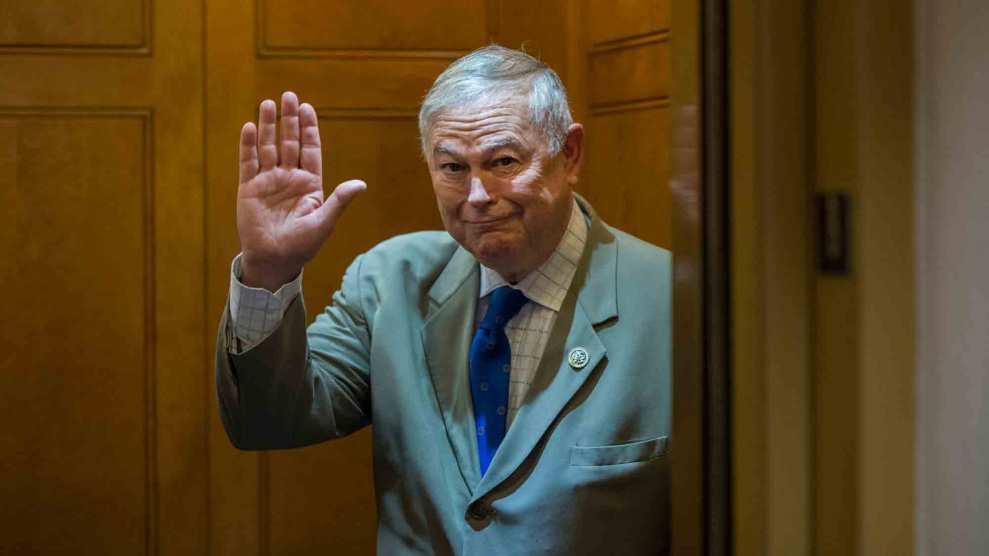 Last week, Mother Jones reported that controversial, Putin-loving Rep. Dana Rohrabacher (R-Calif.) had hobnobbed at a fundraiser with an alleged Holocaust denier—after being criticized for his previous association with the man. This week, Rohrabacher, who is in a tough race to hold on to his Southern California congressional seat, pulled a similar move: He endorsed a local politician who has been described by one media outlet as a “peddler of racist conspiracies.”

On Tuesday, Rohrabacher posted a photo on Instagram of him with Gracey Larrea-Van Der Mark, a candidate for a school board seat in Huntington Beach, California. Rohrabacher endorsed her and called her a “patriot.”

Proud to be supporting Gracey Van Der Mark for school board. She is a patriot and a parent who has great potential to make a difference for our children and our state.. and yes, our country. #ca48 #ovsd #oceanviewschooldistrict #huntingtonbeach

Last month, OC Weekly, which covers Orange County, California, published a story on Larrea-Van Der Mark that makes these endorsements seem odd. The story chronicled her known associations with alt-right activists and white nationalists and previous remarks that have been criticized as racist and and anti-Semitic. The headline: “Gracey Van Der Mark, peddler of racist conspiracies, runs for school board in HB.”

In April, Larrea-Van Der Mark ran into trouble when it was reported that after joining an alt-right protest in summer 2017 against a local workshop about white privilege, she posted a YouTube video from the event with this comment: “This meeting was being ran by the elderly Jewish people who were in there. The colored people were there doing what the elderly Jewish people instructed them to do.” OC Weekly also reported at the time that “one of her YouTube channel playlists dubbed ‘Holocaust hoax?’ includes half-a-dozen anti-Semitic videos.”

On Facebook, Larrea-Van Der Mark insisted, “Nothing I wrote was Anti-Semitic or demeaning to black people.” And at a public forum, she said she had posted the Holocaust denial material to question its content, not support it.

But she was removed from two school district commissions because of her remarks. A letter sent by the Anti-Defamation League maintained, “There is ample evidence she has made bigoted and hateful comments and that she has participated in activities organized and led by white supremacists. These words and actions call into question her ability to serve as an appointed leader in the Huntington Beach community.” (Larrea-Van Der Mark remained on a city finance commission.)

The controversy stemmed from an event in August 2017, when Larrea-Van Der Mark, who has identified herself as part of Latinos/Hispanics for Donald Trump, joined several alt-right activists to protest the meeting on white privilege. The OC Weekly reported:

Van Der Mark accompanied a group of alt-right extremists to Santa Monica where they sought to crash a “White Privilege and What We Can Do About It” workshop organized by the Committee for Racial Justice. The crew included a roll call of…agitators the likes of “Johnny Benitez,” Vincent James Foxx, Baked Alaska and Augustus Invictus. The latter two were scheduled speakers at last summer’s infamous white supremacist “Unite the Right” rally in Charlottesville.

The Unite the Right rally was where white supremacists and neo-Nazis gathered to protest the removal of a statue of Robert E. Lee and express support for the white nationalist movement—an event that turned deadly when one white supremacist drove a car into a crowd of counterprotesters and killed Heather Heyer. It was that same month that Larrea-Van Der Mark saddled up with prominent members of the Unite the Right crowd to protest the white privilege meeting.

Now, a year later—after Larrea-Van Der Mark was booted from two school district commissions for comments decried as racist and anti-Semitic—Rohrabacher has embraced her as she attempts to win a school board seat.

Larrea-Van Der Mark is vying for one of three seats in a race featuring five Republican candidates, three of whom are incumbents. In her ballot statement, she says, “I will focus on ending the deficit spending, focus on student programming and increase morale amongst employees.” School board member Gina Clayton-Tarvin, a Democrat who is not facing reelection this year, has another take: “Gracey Van Der Mark is not the right fit to hold public office, especially one involving young children. I implore all voters…to join me and the Anti-Defamation League in looking deeply into her questionable past and to firmly reject her at the ballot box this November. Our school district does not need an extremist on its board to disrupt the education of our children.”

Neither Rohrabacher nor Larrea-Van Der Mark replied to multiple requests for comment.