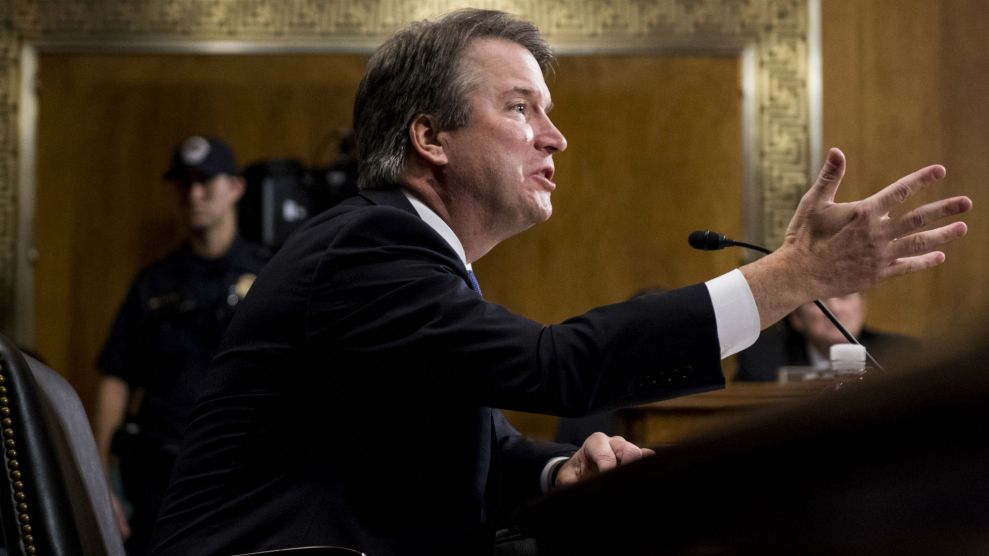 After a series of hushed discussions in a side room with his Republican and Democratic colleagues, Flake emerged and said that while he would approve advancing Kavanaugh’s nomination to the full Senate, he would stop short of a final vote in his favor without an FBI investigation of the sexual assault allegations against the nominee, which Flake stipulated should take no longer than a week.

The move rankled many Republicans and emboldened several others—including swing vote Sen. Lisa Murkowski (R-Alaska)—to stand with Flake. Trump on Saturday tweeted he would allow the FBI to move ahead with the investigation independently and interview whomever they “deem appropriate.”

But new reports from NBC News and the New York Times over the weekend revealed that the White House counsel’s office limited the number of allowed witnesses for the FBI’s investigation. Two unnamed sources, including a senior administration official, told the Times the list thus far appears to have only four names: Mark Judge, Brett Kavanaugh’s high school friend who Dr. Christine Blasey Ford alleges was in the room when Kavanaugh assaulted her at a high school party; Leland Keyser and PJ Smyth, two more high school friends Ford says were at the party; and Deborah Ramirez, who accused Kavanaugh of drunkenly exposing himself to her at a party at Yale.

Excluded from the list is Julie Swetnick, two anonymous sources familiar with the investigation told NBC. Swetnick, who is a client of Stormy Daniels’ attorney Michael Avenatti, last week filed a sworn statement with the Senate Judiciary Committee that accused Kavanaugh and Judge of regularly plying girls at high school parties with spiked drinks in order to facilitate rapes by a “train” of boys.

The list also reportedly excludes Kavanaugh’s Yale college classmates who have alleged that the nominee’s accounts of his youthful drinking—that he sometimes had too many beers but never blacked out or lost memory—differ substantially from their memories of him as a very heavy drinker. Such questioning could be relevant to Ramirez’s allegations about Kavanaugh’s conduct at the Yale party, as well as the truthfulness of his testimony.

NBC reported as well that the FBI has been prohibited from interviewing Kavanaugh’s high school classmates at Georgetown Prep to ascertain the meaning of certain terms on Kavanaugh’s yearbook page, like “boofing,” “ralphing,” and “Devil’s Triangle.” During this week’s hearing, Kavanaugh stated that each of these terms were relatively innocent; he defined “boofing” as flatulence and “ralphing” as throwing up due to his weak stomach. He said the phrase “Renate Alumnius” was a simple reference to his friendship with a student from a nearby girl’s school, Renate Dolphin, as opposed to an insinuation of a sexual conquest. Several alumni of Georgetown Prep have countered that his definitions of these terms are not quite so innocent.

If the FBI were able to interview Kavanaugh’s high school classmates about these questions, they could help clarify both the drinking and the sexual culture at the time Ford alleges Kavanaugh assaulted her. Separately, such an inquiry might also point to the possibility Kavanaugh committed perjury while under oath, a separate issue that might lead senators to withhold their votes from his confirmation.

A White House official denied to NBC the White House is “micromanaging” the FBI inquiry, but did not dispute the specific limits reportedly placed on the bureau’s investigation.

The Times reported that as the inquiry stands, the FBI can interview the four witnesses on the approved list. If its findings lead to new questions, the White House can, at its discretion, order additional interviews with new witnesses. According to the Times, as of Sunday afternoon, Ford herself had not heard from the FBI.

NEW: FBI has not responded to requests from Christine Blasey Ford to do an interview. “We have not heard from the FBI, despite repeated efforts to speak with them,” her lawyer, Debra S. Katz, told me, when asked.

On Sunday afternoon, former FBI director James Comey, who was fired by President Donald Trump in May 2017, published an op-ed in the Times describing the seven-day investigation approved by the White House and Republicans as “deeply flawed”—but noting that the FBI can still do a good job.

“If truth were the only goal, there would be no clock, and the investigation wouldn’t have been sought after the Senate Judiciary Committee already endorsed the nominee,” Comey wrote. “Although the process is deeply flawed, and apparently designed to thwart the fact-gathering process, the F.B.I. is up for this. It’s not as hard as Republicans hope it will be.”

But Comey qualified his confidence in the FBI with one caveat: FBI agents “can speak to scores of people in a few days, if necessary,” he wrote, “unless limited in some way by the Trump administration.”