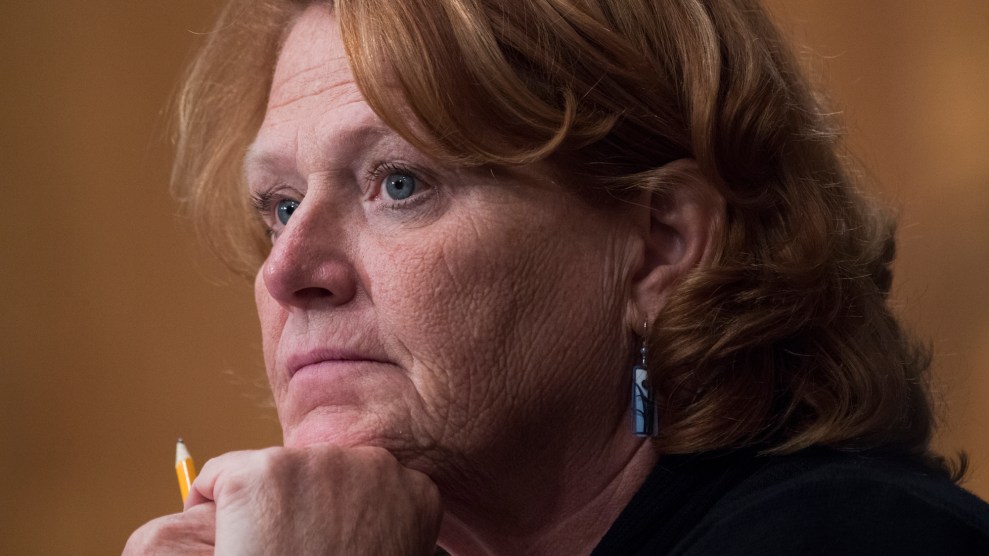 Embattled North Dakota Sen. Heidi Heitkamp announced Thursday that she will vote against the confirmation of Supreme Court nominee Brett Kavanaugh, putting to rest weeks of speculation on how the conservative Democrat would vote amid a tight race against her Republican challenger, Rep. Kevin Cramer, an outspoken Kavanaugh supporter.

Heitkamp announced her vote in an exclusive interview with WDAY, a local news station in Fargo, North Dakota. “This isn’t a political decision. If this were a political decision for me, I certainly would be deciding this the other way,” she said. “I can’t get up in the morning and look at the life experience that I’ve had and say ‘yes’ to Judge Kavanaugh.”

The Senator elaborated on her thinking in a statement posted on Twitter, writing that in addition to her concerns about the sexual assault allegations against Kavanaugh she believes his testimony refuting the allegations last Thursday “called into question his current temperament, honesty, and impartiality.”

With the Senate’s final vote on Kavanaugh expected this Saturday, Heitkamp had been one of two centrist Democratic senators, along with West Virginia’s Joe Manchin, still viewed as a potential “yes” vote on the judge. Her decision puts additional pressure on undecided Republican Sens. Lisa Murkowski of Alaska, Susan Collins of Maine, and Jeff Flake of Arizona, who are also seen as potential swing votes. If all Democrats vote against Kavanaugh, including Manchin, they would still need an additional two Republicans to tank Kavanaugh’s confirmation.

But her decision might also spell doom for her own campaign. A recent survey in North Dakota, a state President Donald Trump won by a 36-point margin in 2016, showed that 60 percent of voters supported Kavanaugh and 27 percent were opposed. Meanwhile, Heitkamp’s poll numbers have been slipping—with Cramer widening his lead from 4 points to the double digits this week.

The Republican congressman had staked out a bullish position on the Kavanaugh nomination, going so far as to argue that attempted rape as a teenager might not disqualify Kavanaugh, even if the allegations were true.

“She may lose,” Heitkamp’s brother, Joel, told MSNBC on Thursday. “But in the morning, when she’s brushing her teeth, she needs to like the person she sees.”