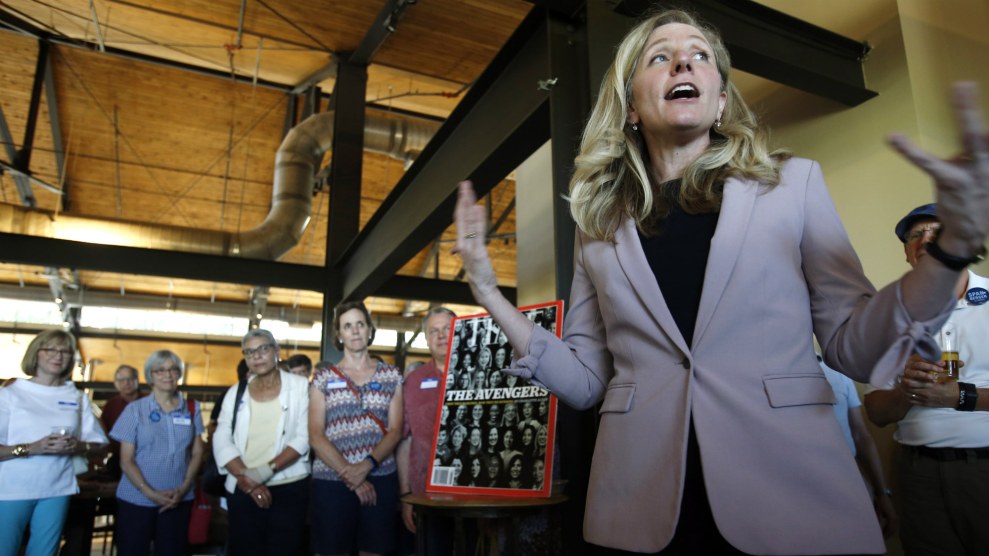 As Democrats continue to wring their hands over whether they can turn out voters on Election Day, yet another candidate is reporting a remarkable multi-million dollar fundraising haul, adding to the arguably historic numbers reported by a number of campaigns already. One such candidate is Abigail Spanberger, a former CIA officer running to upset Rep. Dave Brat (R-Va.), who announced on Sunday that she raised $3.6 million between July and September.

To put that in perspective, the average amount raised by a House Congressional candidate over the entire 2016 election—from January 2015 until December 2016—was just $1.1 million, according to OpenSecrets.org, the non-partisan campaign finance data website. And only nine Democratic House candidates raised $3.6 million or more in that time. There’s no word yet on how much Spanberger’s opponent or most other Republicans have raised—filings are due on Monday—but since the end of September, Democrats have been bragging about huge fundraising totals in a number of races and as a party.

According to the Democratic Congressional Campaign Committee, at least 60 Democrats have raised $1 million or more in the last three months—prior to these numbers, the average amount raised so far this election by a candidate, Republican or Democrat, was just $920,000. And, the DCCC announced, 30 Democratic House candidates raised $2 million or more in the last three months, and eight candidates raised more than $3 million since July. Spanberger is presumably included in those totals, which were announced on Oct. 4, but her numbers had not previously been released.

Beto O’Rourke, the Democratic Senate candidate for Texas, says he has raised a record-breaking $38 million in the third quarter, but it’s not clear if other Democratic Senate candidates have done as well. We won’t know the Republican numbers until they are released tomorrow, but the numbers are likely to not be as large—totals like Spanberger’s and O’Rourke’s are rare. According to Politico, just 21 candidates from either party raised more than $1 million during the same time frame in 2016.

Historically, the candidate who raised the most money has usually been the winner, but with the emergence of outside groups, like super-PACs that have the ability to raise and spend unlimited amounts of money, the dynamic has changed. By intervening in a close race with multi-million dollar ad buys, outside groups have been able to successfully sway a close race and obliterate any advantage one candidate might have in campaign fundraising. However, candidates with multi-million dollar war chests, like Spanberger now has, can blunt the impact of the outside spending.

Still, Spanberger’s race has already been flooded with large chunks of outside spending: in the last two weeks alone, outside groups have spent $2.2 million on ads targeting both Spanberger and Brat.

In terms of indicating enthusiasm for a candidate, the numbers bode well for the Democrats who are reporting big fundraising numbers. Unlike a super-PAC, which might have a multi-million dollar budget funded entirely by one donor, campaigns can’t accept donations larger than $2,700. It’s not yet clear if Spanberger and other Democratic candidates are benefitting from the kind of small-dollar donations that candidates like Bernie Sanders and Donald Trump tapped into in 2016, but they do indicate that an unusually large number of donors, who may also be voters, are tuning into the race and are willing to support the candidate.

Brat himself is no stranger to facing an opponent with big fundraising—he rose to national prominence in 2014 when he defeated then-House Majority Leader Eric Cantor, a Republican fundraising juggernaut, on a shoestring budget. Through the end of June, Brat had raised a healthy $1.3 million. The Congressional district was long thought to be a safe Republican seat—Brat won reelection by 14 points in 2016—but is currently rated as a “toss-up” largely on the strength of suburban voters irritation with President Donald Trump.