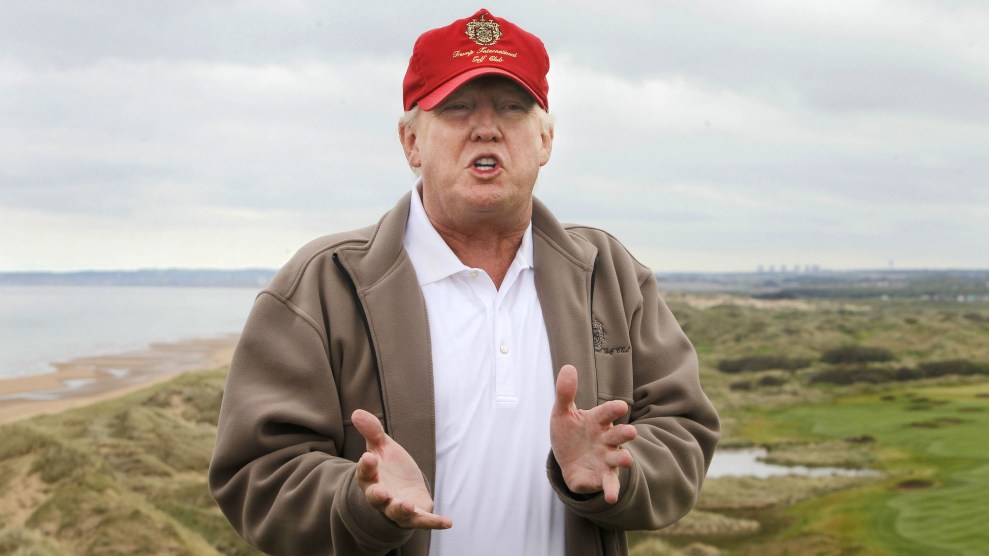 President Donald Trump during a 2013 visit to his Aberdeen golf course. Press Association via AP Images

Not only is Donald Trump’s Turnberry golf course losing money, but new filings in the United Kingdom show that his other Scottish golf course, Trump International Golf Links Scotland in Aberdeen, also lost a bunch of money in 2017. Neither course has ever turned a profit under Trump’s ownership—despite the president spending over $200 million to purchase the land and build out the courses—but the newly filed financial records show that the Aberdeen course’s finances have slumped since Trump announced his bid for the presidency.

The Aberdeen course lost £1.2 million ($1.7 million) in 2017, according to a corporate filing that the Trump Organization submitted last week to UK regulators. That number is a slight improvement from 2016 when the course lost £1.4 million. A closer reading of the Trump company’s filings show that any improvement last year largely came from cost-cutting measures—the course’s income has severely slumped since 2015.

In statements signed by Eric Trump, who has taken over day-to-day management of the Trump golf business while his father is president, the filings suggest that the decline in business is related to a downturn in the price of oil, which has created hard economic times in Scotland—an explanation used in previous years, but one that doesn’t necessarily jibe with the company’s portrayal of the resort as a hub for international luxury tourism. In the filings, the Trumps report that the course saw a slight improvement in income from “provision of services”—in other words, fees from people visiting to golf—but saw a 12 percent decline in “sale of goods.” And the course brought in just about half a million pounds less in 2017 than it did in 2016.

When Trump announced plans to build the course in 2008, he told local government officials that the resort would eventually create as many as 6,000 jobs by building a massive complex of multiple golf courses, a large hotel, and hundreds of individual homes or condo units. Instead, after 2017’s cost-cutting, the course now employs 84 people, down from a high of 95 in 2015.

While Trump relentlessly touts his business success, it remains relatively difficult to pinpoint specifics of how successful his business empire really is. None of his American golf courses or hotels are required to disclose such detailed numbers on profitability, and personal financial disclosures filed with the Office of Government Ethics only require Trump to list revenue from his businesses, not their profitability. The UK corporate filings, along with similar filings in Ireland for a course that Trump owns in that country (which have yet to be filed for 2017), provide some of the clearest glimpses at how Trump’s business is faring during his presidency.