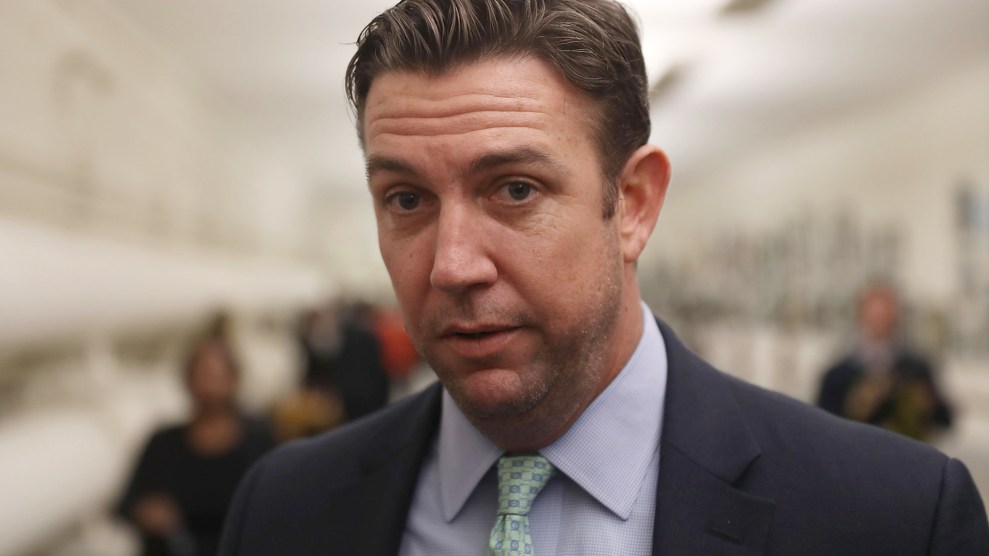 Duncan Hunter, the embattled Republican congressman fighting to hang onto his San Diego seat after he was indicted for campaign finance violations, has released a letter written by three Marine Corps officers claiming Hunter’s opponent, Ammar Campa-Najjar, is a “national security risk.” The letter mentions his Democratic rival’s grandfather, who was involved in a terrorist attack in the 1970s, and who died several years before Campa-Najjar was born.

“Should he be elected, [Campa-Najjar] would have access to classified, secret information on our military ops in the Middle East,” the letter says. “If Democrat Candidate Ammar Campa-Najjar should get elected and sees secret information on U.S. military operations that would endanger members of the Najjar family in the Middle East, would he compromise U.S. operations to protect his relatives, the Najjars?”

The letter was signed by Brig. General Terry Paul, Maj. General Randall L. West, and Maj. General T.L. Corwin, all retired Marines who say in the letter they have ties to San Diego, where Hunter’s 50th District is located. (Hunter served in the Marine Corps.) The most high-profile of the men appears to be Paul, who is an executive VP at the government relations firm Cassidy and Associates. According to Politico, Paul has also served as a lobbyist for the software company Palantir in its attempts to secure national security contracts. Politico also reported Paul is a close friend of the Hunter family.

As for West, a Bloomberg profile says he is president of Robison International, a DC lobbying and consulting firm. Corwin is listed online as a consultant at Blank Rome, a government relations firm.

This is not the first time Campa-Najjar, who is of Mexican and Palestinian descent, has been the subject of attacks calling into question his motives for running. Last month, Hunter began running an ad that falsely accused his rival of receiving campaign support from the Muslim Brotherhood and plotting to “infiltrate Congress.” Like the letter, the ad highlighted Campa-Najjar’s grandfather’s ties to the 1972 terrorist attack at the Munich Olympics. Campa-Najjar has repeatedly denounced his grandfather’s actions and highlighted his own Christian faith. Earlier this month, 70 current and former national security officials signed a letter denouncing Hunter’s ad.

“As veterans, we take particular offense to the clear and racist suggestion that Mr. Campa-Najjar’s heritage or ethnicity make him less American than Mr. Hunter, or in any way less fit to serve,” Veterans for Ammar, a group of military personnel supporting the Democrat, said in a statement. “Mr. Campa-Najjar’s life personifies the values and American exceptionalism that we fought to defend while in uniform.”

Hunter, whom the federal government has accused of using $250,000 in campaign funds for personal expenses, is running for a sixth term in the 50th District. Despite the allegations, which Hunter denies, he is still expected to hang on to his seat in the heavily Republican district.