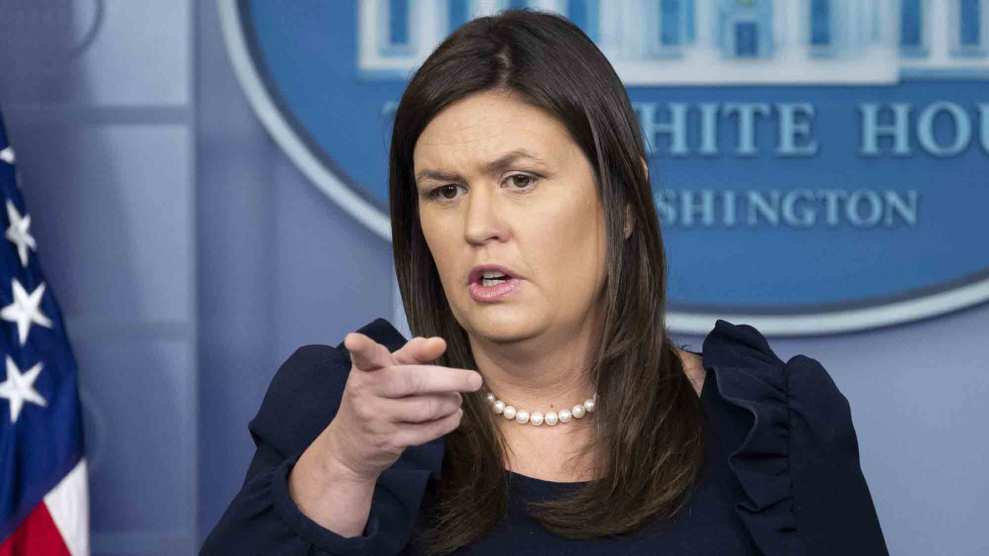 It was not surprising. Giving the first White House news briefing in weeks, press secretary Sarah Huckabee Sanders issued predictable words: “The American people reject hatred, bigotry, prejudice, and violence.” But President Donald Trump has not rejected any of that. The case is undeniable—except Trump and his minions keep denying it.

Hatred: Trump has encouraged chants of “lock her up” regarding Hillary Clinton, his opponent in the 2016 presidential election. He has demeaned and demonized other political foes, engaging in name-calling and bully-like taunting. And he has offered comfort to haters, such as when he noted there were “very fine people” among the white nationalists who organized the Charlottesville protest. He has repeatedly called the media the “enemy of the people.” He did so once again Monday morning, even as the national discourse focused on the possibility of healing divisions. All this is hate, pure and simple.

There is great anger in our Country caused in part by inaccurate, and even fraudulent, reporting of the news. The Fake News Media, the true Enemy of the People, must stop the open & obvious hostility & report the news accurately & fairly. That will do much to put out the flame…

Bigotry and prejudice: Trump pushed the racist birther conspiracy theory about former President Barack Obama. He claimed an American federal judge could not be impartial because he was “Mexican.” He has routinely referred to his African American critics as “low IQ.” He has often uttered misogynistic comments, referring to women as pigs and dogs. (And there is that Access Hollywood tape.) He pressed for a ban on Muslim travelers to the United States (and had to revise course to skirt judicial opposition to its prejudicial nature).

Violence: Trump recently praised a Republican congressman for assaulting a reporter. That remark prompted media outlets to review his previous comments that encouraged violence. Here’s one. Here’s another. These videos don’t lie.

So if the checklist is hatred, bigotry, prejudice, and incitement of violence, the response is check, check, check, and double-check.

So how can Sanders say Trump is opposed to all this? Why is she not laughed out of the White House briefing room? Why do Republican leaders (and followers) accept—and, thus, enable—Trump’s hatred, bigotry, prejudice, and violence? These are critical questions at a time when the divisive rhetoric coming from Trump and his GOP collaborators may well be motivating persons to commit heinous and murderous acts.

The nature of conventional political media reality is allowing Trump, Sanders, and their whole crew to get away with this gaslighting. There is no penalty for such lies. There are no mechanisms for tossing these players out of the national discourse. There is no penalty for such profound prevarication. MSNBC commentators will howl. CNN anchors will point out the contradictions. But Fox News will defend, as many Republican elected officials will duck and cover, and, in the current tribalized environment, Trump supporters will cling ever tighter to his false statements and claims.

This is how the political market works these days: For Trump’s backers, the lies—his promotion of racism, misogyny, and violence—do not matter. If they did, he would not have bagged 63 million votes in the 2016 election. Many, if not most, of these voters are beyond the persuasive reach of media reports focused on the facts of Trump’s hatred—or his conflicts of interest, or his policy ignorance, or his fill-in-the-blank.

And Trump, Sanders, and Co. (this means you, Kellyanne Conway) have refined their ability to turn fact-based criticism into an affirmation for his audience. At the press briefing, Sanders, adhering to her boss’ practice, steadfastly refused to acknowledge that Trump shares an iota of blame for the sharp rhetoric and divisiveness that mars the current political culture. Instead, she cast an accusing finger at the media. By reporting on Trump’s deployment of hate, these organizations are apparently responsible for the toxicity that infects the political environment.

This is something of a master stroke. It may not convince the majority of Americans who do not support Trump and his poison. But it’s a creative jujitsu move, in which Trump and Sanders foist the blame on the media for maintaining (that is, reporting) that Trump campaigns and rules by division. For the Trump/GOP base, this is catnip. This is crack. It plays to their paranoia about the non-Fox media. It positions Trump as the ultimate victim. It absolves Trump—and them—of any wrongdoing. And here you can plug in the obligatory Orwell reference. But yes, it is “war is peace.” The real sin, the real reason political debate has become a cesspool, Sanders said at the presser, is that the media “blame the president.” Poof! The perp is the wronged party. His grievance is what matters most. And how dare you suggest otherwise!

This is a deep hole. The Trumpers are promoting an alternative and perverse reality their supporters deeply need. (Without it, they are the bad guys for cheering on Trump, birtherism, the Soros conspiracies, and all the other hate-fueled drivel of the right.) And the media has a tough time reporting on a guy who repeatedly claims a blue sky is purple. Certainly, journalists have become bolder in pointing out Trump’s lies and falsehoods. (The Washington Post‘s fact-checker noted that Trump, as of early September, had uttered 5,001 false statements. The newspaper kept no such tally for George W. Bush or any other president.) Still, the media of today is not able to—or does not know how to—dismantle effectively and continuously the false reality Trump creates daily with his fusillade of tweets and that Sanders, Conway, and others bolster with their own nonsense and lies. (Conway claimed the Pittsburgh attack was motivated by anti-religiosity, as if atheists were at fault, instead of those who demagogue about a caravan of migrants in Central America and concoct connections to terrorists and George Soros.)

Sanders’ performance at the first post-Pittsburgh press conference was nothing new, nothing shocking. It was merely example No. Whatever of how the Trump presidency depends on the art of the con. There is no truth. There is only the latest pitch. And the big lie is what stultifies and sells the best. Political violence appears to be on the rise. And Trump doesn’t give a damn. And he doesn’t care his “it’s not me” defense is patently absurd. He’s like a bad magician whose trick is so obvious, there is no mystery. Yet he acts like his deception is working. But it only succeeds because enough people in the audience want it to work. And this is what makes the current moment so troubling and so potentially dangerous.