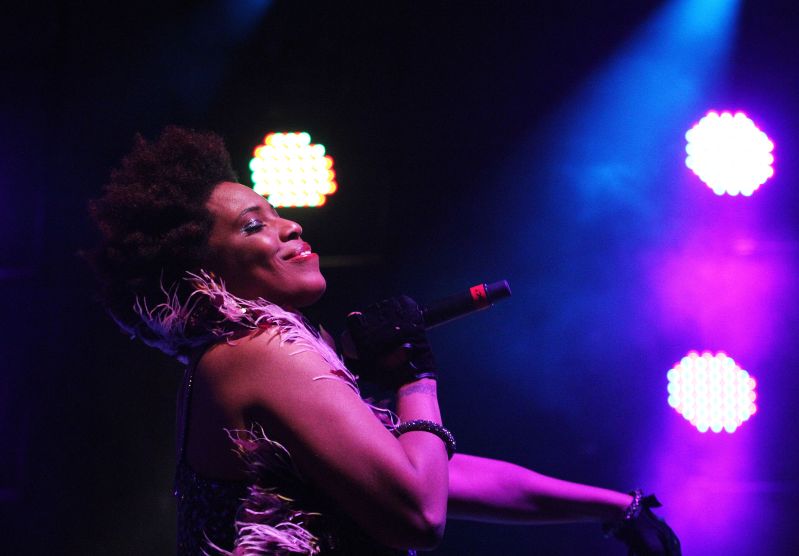 Long week? For us too.

The sheer misery of the ongoing Kavanaugh drama has just amplified the horrors of the Trump administration, and we needed a song that could channel that national feminist rage into something soulful, hopeful, and even constructively combative. We have all that for you and more on this week’s “Friday Find,” our weekly music pick showcasing some of the freshest and best of what the music scene has to offer.

It’s been a doozy of a week, but it’s Friday! This week’s “Friday Find” is the perfect addition to your feminist rage themed playlist, @macygrayday’s “White Man.” @sam.vp delves into it at motherjones.com. #newmusicfriday #feminist #rage #music

Why we’re into it: It’s time for some pure and beautiful feminist rage.

Maybe it has been the sheer, unvarnished misogyny this week, but we felt we needed something to recharge us and bring us kicking and punching into next week. Fortunately, that’s exactly what Macy Gray’s song “White Man” does.

Gray, best known for her 1999 hit “I Try”—or for you Ariana Grande fans, Gray was featured on the soulful track “Leave Me Lonely” on her album Dangerous Woman—is back with her 10th album Ruby, and while all the tracks are beyond worth listening to, “White Man” shines through. It’s a song of rage, exhaustion, redemption, and exhilaration.

The track begins with soft piano and a bit of tambourine, before Gray’s raspy vocals appear, all softspoken rage. You know when your parent says something calm, cool, and collected, but you can just feel the anger behind the words? That’s the same energy Gray radiates, becoming more apparent as she continues, the beat becoming quicker and quicker, and the wail of a  trumpet in the distance.

Yet, digging into Gray’s words, it’s apparent this song belongs in soundtracks embodying the righteous rage of women that’s sweeping through the nation as it appears more likely Kavanaugh will secure his spot on the Supreme Court. Gray addresses the “white man,” singing, “I’ll make a drink and I toast you my hell,” gracefully touching on that dual reality that exists of those with privilege and those without, those in charge, and those who are supposed to serve. As many continue to share their stories of sexual assault, harassment, and abuse a dual reality has opened up to the pervasiveness of abuse by powerful men that seems to be ubiquitous. Gray’s lyrics address that fact.

This is not a song of despair, however, but one with hope, and a call for unity, as she implores us, “Let’s go together, let’s make it better.” Moments of rage, moments of hope, moments of confrontation, Gray’s song is another anthem we will be adding to our feminist rage playlists as much of our  nation continues to watch and fight to be heard.

So let’s move! Shake your limbs to her tambourine and dance to that trumpet. As always, we want to hear your suggestions, thoughts, comments! Let us know what you think next week’s pick should be, or just sound off about how this song makes you feel.

As we all brace ourselves for tomorrow’s vote, enjoy your feminist Friday.