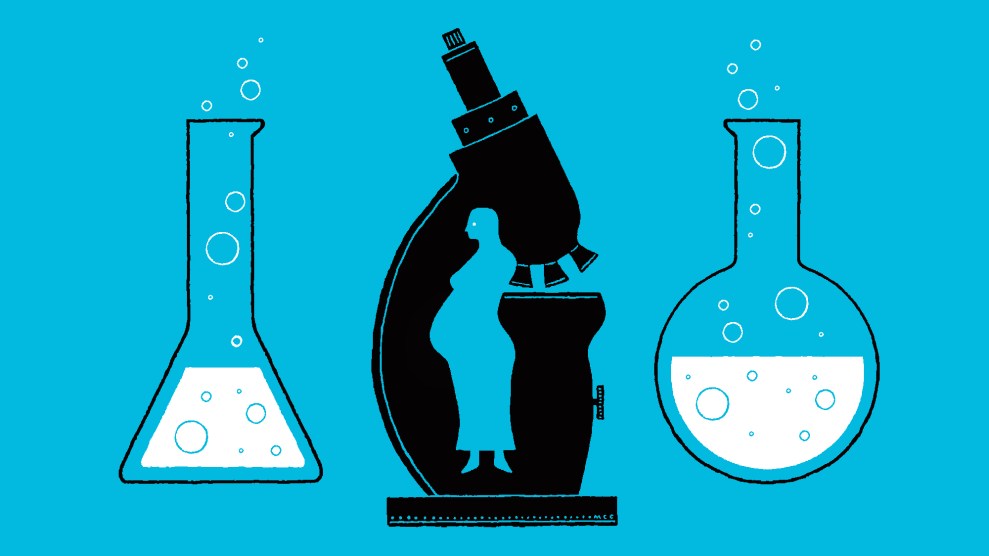 Kate O’Brien was several months pregnant when she was diagnosed with tuberculosis, a potentially deadly and highly contagious disease. She was held in a hospital isolation room for months, where she underwent rounds of treatment. But because she was pregnant, her body didn’t take to the drugs well, and O’Brien, then 35 and living in New York City, got hepatitis. The doctors pulled her off the drugs to let her liver heal, only to start the process all over again. The journey was harrowing.

“There’s always the risk-benefit ratio of trying to figure out when it is better to take a medication, because not taking it could be far worse,” says one OB-GYN.

Though O’Brien’s experience, which I first reported on for the September/October 2018 issue of Mother Jones magazine, was awful, it’s not entirely unique: Every year, some 500,000 pregnant women face serious health issues, from depression to heart disease to cancer. And as with O’Brien, doctors can’t always predict how drugs will affect a pregnant woman’s body (not to mention her fetus). That’s because virtually zero drugs are tested on pregnant women.

That could soon change. A landmark government report, published late last month, calls for the inclusion of pregnant and lactating women in drug trials to close the gaps in our knowledge of drug safety. The 400-page document is the product of an expert task force created by Congress specifically to look into the state of medical research on pregnant and postpartum women, and it’s the first report of its kind to lay out, in detail, what we know.

Here’s what we know: Using medication during pregnancy and while breastfeeding is incredibly common—90 percent of women do it. Meanwhile, these women are almost categorically excluded from drug trials and clinical research. As I’ve reported elsewhere:

A 2014 study in the American Journal of Obstetrics & Gynecology found that of the 213 new pharmaceuticals approved by the Food and Drug Administration between 2003 and 2012, only 5 percent included research on pregnant women. And a recent review of nearly 36,000 “pharma­cokinetic” studies—research that analyzes the way drugs move through the body—found that less than 2 percent involve pregnant women. Only a handful of medications, all for conditions of pregnancy like morning sickness and preterm labor, have been explicitly approved by the FDA for use by expectant mothers. Meanwhile, a 2011 study in the American Journal of Medical Genetics found that of 172 drugs approved by the FDA between 2000 and 2010, risk to the fetus could be determined only 2 percent of the time. Yet despite these unknowns, the FDA considers all drugs approved for women of reproductive age to also be approved for pregnant women—unless manufacturers determine that the risks of the drug outweigh the therapeutic benefits. That leaves the pregnant women considering whether to take medication with little sound information to go by. Catherine Spong, an OBGYN and the former deputy director of the National Institute of Child Health and Human Development, says it’s a conversation she has every time she sees a patient. “There’s always the risk-benefit ratio of trying to figure out when it is better to take a medication, because not taking it could be far worse,” she says. “Someone who is depressed or suicidal, not taking that therapy is going to be far worse.”

Of course, drug makers have reason to be worried about including pregnant women in their testing: They’re scared of ending up like the manufacturers of thalidomide, the once-popular morning-sickness medication that caused serious congenital deformities and led to tens of millions of dollars in payouts to the families affected. The incident resulted in big changes to how pharmaceutical companies and federal regulators think about drug safety for pregnant women. For example, following the scare, the Federal Drug Administration passed regulations effectively increasing the barrier to entry for researchers thinking about including women in trials. One of those rules requires that the father of the fetus give consent before a woman participates in a medical study.

The report by the task force offers 15 recommendations on how to boost the available information on drug use by pregnant and postpartum women, including by ending the exclusion of such women in drug research. According to Spong, who chaired the task force until late summer, Alex Azar, secretary of the Department of Health and Human Services, has until December to decide whether to move forward on any of the recommendations.

It’s unclear what the chances are that Azar will agree with the recommendations in the report, but either way, says Ruth Faden, founder of the Johns Hopkins Berman Institute of Bioethics, “the very existence of the report is huge.”

“Anyone who has ever been pregnant, who might become pregnant, or who has loved a pregnant person has a stake here,” Faden told me over the phone. “We’re talking about trying to ensure that pregnant women are as healthy as they can possibly be.”

Here are some of the biggest takeaways from the report: