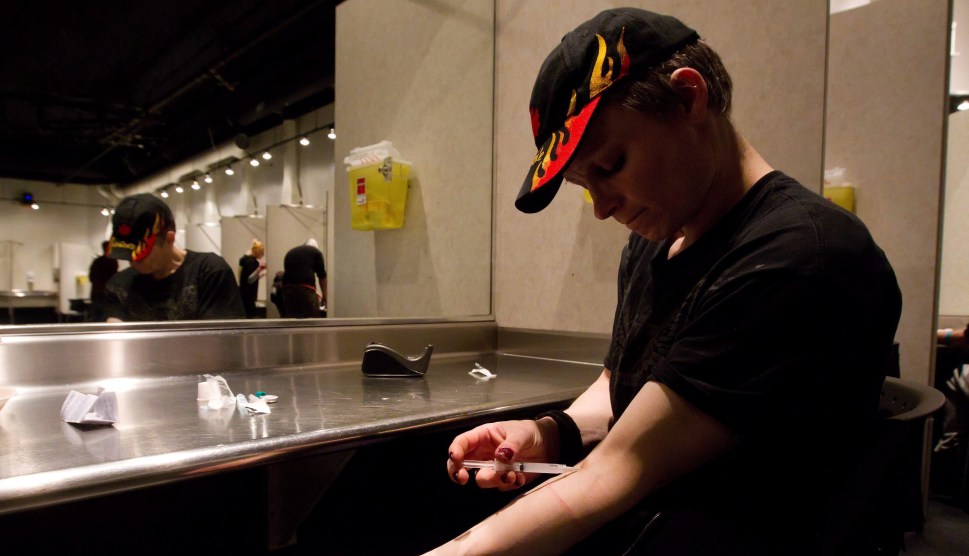 In an April 18, 2011, photo, a user injects morphine he bought on the street at the Insite safe injection clinic in Vancouver, British Columbia. AP

On Sunday, Democratic California Gov. Jerry Brown vetoed a bill that would have allowed San Francisco to open what could have been the nation’s first supervised drug injection sites.

“People will die because of his veto,” said one advocate of supervised drug injection sites.

“Fundamentally, I do not believe that enabling illegal drug use in government sponsored injection centers—with no corresponding requirement that the user undergo treatment—will reduce drug addiction,” Brown wrote in his veto message.

The veto drew sharp criticism from proponents of safe injection facilities (SIFs), who argue that providing clean, monitored space for drug users to use illicit drugs would reduce overdose deaths. “I am shocked that the Governor turned his back on the science and the experts and instead used outdated drug war ideology to justify his veto,” said Laura Thomas of the Drug Policy Alliance. “People will die because of his veto.”

SIFs are controversial, but dozens of studies on existing SIFs—there are more than 100 in Canada, Germany, the Netherlands, and elsewhere—have found that the sites reduce drug overdoses and the transmission of infectious diseases like HIV and hepatitis C, increase access to addiction treatment, and save cities money in hospital and prison costs. They are a prime example of harm reduction, or the idea of making drug use less lethal so eventually, users seek treatment. (Needle exchanges, which provide clean injection supplies, and the distribution of naloxone, the overdose reversal drug, are others.)

No US city has a SIF yet, in part because allowing drug use in taxpayer-funded facilities would likely spark a thorny legal battle between state and federal authorities. Days after California lawmakers sent the bill to Brown’s office, Deputy Attorney General Rod Rosenstein warned in a New York Times op-ed that “cities and counties should expect the Department of Justice to meet the opening of any injection site with swift and aggressive action.” Still, support of SIFs is moving mainstream: Last year, the American Medical Association came out in favor of piloting the facilities in the United States. Policymakers in Philadelphia, New York, and Seattle have expressed support.

“It was an opportunity to lead the country in this crisis,” said one epidemiologist.

“It was an opportunity to lead the country in this crisis,” says Dr. Dan Ciccarone, an epidemiologist at the University of California-San Francisco, of the bill. “By better engaging the population at risk, we could achieve what both opponents and supporters want: reduce deaths and move folks toward treatment.”

This isn’t the first time this year Brown has frustrated drug policy experts. Earlier this month, he vetoed a bill that would have required insurance companies to cover all three opioid addiction medications: methadone, buprenorphine, and naltrexone. (He argued that the bill would have removed health plans’ ability to require that patients also use other services, like counseling or outpatient treatment, alongside the medications.)

Brown also eliminated popular budget proposals that would have added staff to emergency departments and needle exchange programs to help drug users navigate addiction treatment options. “The public health infrastructure in California has never recovered from the cuts made to it during our years of budget crisis,” Thomas told Mother Jones. “It’s disappointing that a governor who listens to and champions the scientific consensus on climate change, for example, refuses to do so on substance use.”