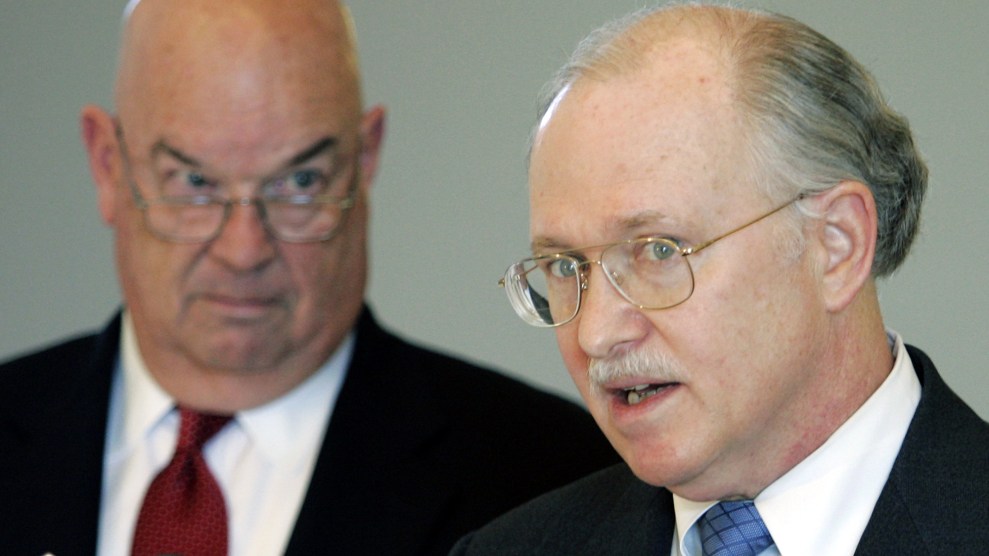 Alabama Supreme Court Justice Tom Parker, right, listens to a question with his attorney Bill Gray, left, during a news conference in 2006 in Montgomery. Rob Carr/AP

Update (11/6/18): Tom Parker, a former aide to Roy Moore, was elected as chief justice of the Alabama Supreme Court.

Less than a year ago, Alabamans rejected Republican Roy Moore’s bid for the US Senate amid allegations that he had sexual contact with teenage girls while he was in his 30s. But next month, there’s a chance voters will usher in one of Moore’s former aides and judicial acolytes: Republican Tom Parker, an associate justice on the Alabama Supreme Court, is vying to become its next chief justice. Given his reputation for religious zeal and his writings on abortion, many fear that a Parker victory could have major consequences for reproductive rights in the state.

In November, Parker will face challenger Bob Vance, a Jefferson County circuit judge who would be the only Democrat on the state’s high court if elected, and who has sought to depict Parker as “another Roy Moore.” That comparison is fueled in part by the pair’s shared religious fervor and opposition to gay rights.

Parker and Moore’s ties go back more than a decade: When Moore served as chief justice of the court in 2003, Parker was his adviser and spokesman. That year, Moore was suspended from the bench for refusing to remove a massive Ten Commandments monument that he’d installed in the lobby of the state judicial building. Moore was reelected as chief justice in 2012 and then ousted again in 2016 after an ethics panel found that he ordered probate judges to ignore the US Supreme Court’s decision legalizing gay marriage. (According to the Associated Press, Parker, an associate justice since 2005, has argued Moore was unfairly targeted in 2016 because of the Ten Commandments controversy.) Like his old boss, Parker suggested on a radio show in 2015 that state courts should resist the legalization of gay marriage.

And both men have come under fire for their apparent nostalgia for the Confederacy. At a campaign rally in 2017, Moore told a black person in the crowd that America was great during the era when “our country had a direction” and “families were united, even though we had slavery.” Parker was photographed handing out Confederate flags at a funeral in 2004 and posing beside Leonard Wilson, a board member of a white supremacist group called the Council of Conservative Citizens; that year he also went to a party commemorating the founder of the Ku Klux Klan. “Political correctness should not cause people to dishonor our history,” he reportedly said at the time, adding that his respect for Southern heritage should not be misunderstood as racism. He did not respond to Mother Jones’ multiple requests for comment.

The conservative Supreme Court majority is “going to need cases they can use to reverse what the liberal majorities have done in the past,” Parker said.

Parker hasn’t shied away from his similarities to Moore and his mission to reverse progressive legal precedents. “I’m running for chief justice because we are at a pivotal point in America today,” he said ahead of the June primary. “President Trump is just one appointment away from getting us a conservative majority on the Supreme Court, and they’re going to need cases they can use to reverse what the liberal majorities have done in the past.” (Parker also ran unsuccessfully for chief justice in 2006.)

Along with opposing gay marriage, Parker has expressed a desire to restrict access to abortion: Earlier this year, he said the 1973 Roe v. Wade decision, which affirms the constitutional right to an abortion, was “invented out of whole cloth just to satisfy a political agenda.” According to a recent profile by the Montgomery Advertiser, he “proudly displays” a searing 2014 article about him by ProPublica reporter Nina Martin with the headline “This Alabama Judge Has Figured Out How to Dismantle Roe v. Wade.”

Through his legal writing, Parker has positioned himself as a key figure in the so-called personhood movement, which contends that fetuses should have the same legal rights as people. “Again and again,” Martin writes, “he has taken cases that do not directly concern reproductive rights, or even reproductive issues, and found ways to use them to argue for full legal status for the unborn.” In 2013, for example, Parker penned a 55-page opinion finding that the state’s felony “chemical endangerment” statute, intended to keep kids safe from their parents’ home-based meth labs, should also protect a fetus whose mother used meth during her pregnancy. In 2005, according to Martin, Parker told a conference in Virginia that judges who legalized abortion were “shaking the very foundation of our society.” The conference was organized by Vision Forum, a Texas ministry whose founder is part of a movement that believes husbands should vote on behalf of their wives.

With less than a month until the election, Parker recently urged the US Supreme Court to overturn Roe. “An unborn child’s fundamental, inalienable, God-given right to life is the only right the states are prohibited from ensuring for the unborn child,” he wrote on October 19. “The isolated Roe exception, which is increasingly in conflict with the numerous laws of the states recognizing the rights of unborn children, must be overruled.” His statement came as part of a concurring opinion in the case of Jessie Livell Phillips v. State of Alabama, in which the state Supreme Court unanimously ruled against a man who was sentenced to death in 2015 for killing his wife, who was eight weeks pregnant; the man argued in his appeal that he should not have been convicted of murdering the fetus because it was not a person, a claim that Parker rejected.

“In Roe, the United States Supreme Court, without historical or constitutional support, carved out an exception to the rights of unborn children and prohibited states from recognizing an unborn child’s inalienable right to life when that right conflicts with a woman’s ‘right’ to abortion,” he wrote.

Alabama’s Amendment 2 “would pave the way to outlaw all abortion in the state, even in cases of rape or incest,” says Barbara Ann Luttrell of Planned Parenthood.

The stakes for reproductive rights in Alabama are especially high this election season. Voters there will also decide on an anti-abortion ballot initiative that would insert language into the state constitution about the “rights of unborn children.” The initiative, Amendment 2, is a trigger law, meaning it would go into effect if Roe were ever overturned. “Essentially it would pave the way to outlaw all abortion in the state, even in cases of rape, incest, or if the life of the woman were at risk,” says Barbara Ann Luttrell of Planned Parenthood Southeast, who adds that with the recent appointment of US Supreme Court Justice Brett Kavanaugh, “Roe is more at risk than ever.”

If Parker became chief justice of Alabama’s high court, his opinion would carry the same weight as that of associate justices, but he would have some discretion over which cases are heard, and he would set the overall tone of the court, says Jenny Carroll, a law professor at the University of Alabama. If voters pass Amendment 2 and also choose Parker as chief justice, “you face the possibility that he tries to block a discussion about whether it’s constitutional at the state level,” she says of the ballot measure. “Beyond that, there’s a real risk that voters would be signaling to the Legislature that if you want to go forward on these restrictive laws, we’ll back you up, because we have given you a Supreme Court that will not be afraid to take extreme positions on this.”

While Vance is far from progressive, in Carroll’s view he supports a woman’s right to abortion as defined by Roe v. Wade and subsequent cases. (Mother Jones reached out to Vance’s campaign but has yet to hear back.) A poll over the summer showed Parker with a 16-point lead in the race, but Vance has a fundraising advantage. As of late July, his campaign had nearly $240,000 on hand, while Parker had about $14,000. And Vance is a big political name in the state: He’s married to a former US attorney for Alabama, and his father was a federal appellate judge who was assassinated in 1989. This is also not his first attempt at securing the chief justice seat. He ran against Moore for the position in 2012 and came surprisingly close, losing by just 62,000 votes in the deep-red state—an outcome that reportedly encouraged Democrat Doug Jones to challenge Moore for Jeff Sessions’ Senate seat last year.

Some Alabama judges and mainstream Republicans aren’t eager to see Parker win. In May, seven former and current state Supreme Court justices came out in support of his challenger in the Republican primary. One of them, former Associate Justice Thomas Woodall, donated to Vance, as did former Chief Justice Drayton Nabers Jr. “You have folks who are very cautious about engaging in that type of extreme conservatism,” says Carroll. She draws parallels to the mainstream Republicans who withdrew their support from Moore during the Senate campaign, “not because they were keen to elect a Democrat, but because they were keen not to elect Roy Moore.”

Of course, Parker doesn’t carry the same personal baggage that Moore did. But there’s something else that could work against him: A record number of black women are running for office in Alabama this year, which could draw more Democratic voters to the ballot box. Ninety-eight percent of black women in the state supported Doug Jones last year, a key factor in his victory. While Alabama women as a whole are fairly split on the topic of abortion, and there are many who would vote for a justice who takes a stronger position on personhood, Carroll says, “I also think you’re seeing organizing in Alabama that we really haven’t seen before. They are saying, ‘I want to have serious conversations about issues and I’m not sure if the likes of Roy Moore or Tom Parker really represents me anymore.'”