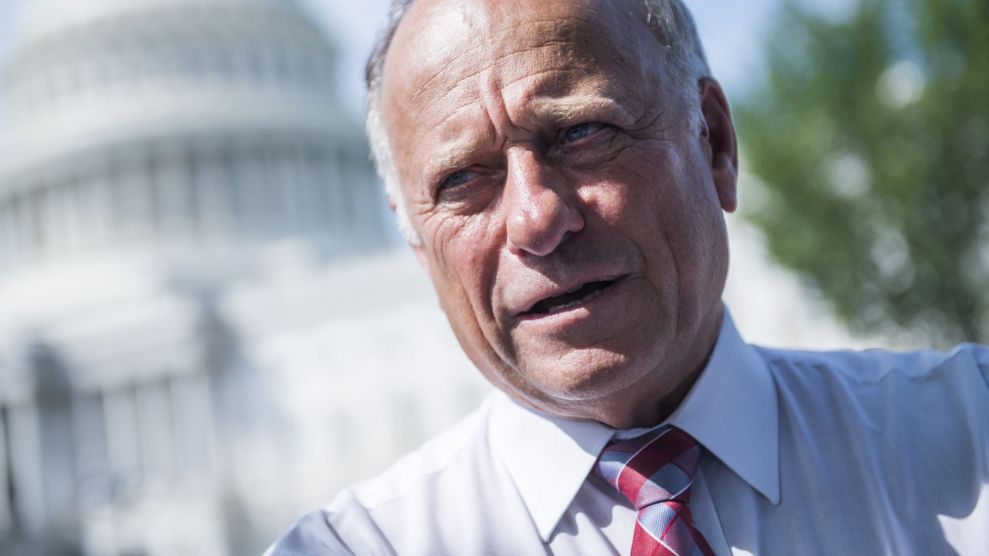 Rep. Steve King, R-Iowa, attends a rally with Angel Families on the East Front of the Capitol, to highlight crimes committed by undocumented immigrants on September 7. Tom Williams/CQ Roll Call/Newscom/ZUMA

Iowa Rep. Steve King, the conservative lightning rod known for his racist and anti-immigrant rants, made headlines again Thursday when the Washington Post revealed that he met with members of an Austrian far-right party during a trip paid for by a Holocaust memorial group.

The Republican congressman had been on a five-day trip to Poland funded by From the Depths, a group that educates people about the Holocaust, before visiting Vienna and giving an interview to Unzensuriert, a website associated with Austria’s Freedom Party. The party was founded by a former Nazi SS officer, though it has since rejected its Nazi ties, as King emphasized in an interview with the Post. From the Depths paid for King’s airfare to and from Europe, though King financed the Austria excursion himself, and the president of From the Depths said he didn’t have any knowledge of those plans.

In his interview with a website linked to an Austrian far-right party, King said that Muslims and liberals “have teamed up against Western civilization.”

King has already attracted criticism for his interview with Unzensuriert, in which he said that Muslims and liberals “have teamed up against Western civilization” and echoed rhetoric used by many white nationalists. King seemed to agree with the interviewer when she brought up a racist conspiracy theory called the “Great Replacement,” which holds that European civilization is being wiped out by nonwhite migrants. “The US subtracts from its population a million of our babies in the form of abortion,” King said. “We add to our population approximately 1.8 million of ‘somebody else’s babies’ who are raised in another culture before they get to us. We are replacing our American culture 2 to 1 every year.”

King partially blamed the phenomenon on billionaire George Soros, echoing conspiracy theories about the Democratic donor that are often tinged with anti-Semitism. In his interview with the Post, King stood behind his comments about Soros and said, “I don’t think about George Soros as a Jew.” He also told the Post he visited sites outside of the group because he wanted to get a “Polish perspective” on the Holocaust: “I asked them what was worse, was it the Nazis or was it the Soviets?” King said. “And they don’t know the answer to that because the Soviets occupied them longer, may have killed more of them, but it was over a longer period of time.”

Recently, King’s inflammatory rhetoric has been targeted by his opponent in this year’s election, former professional baseball player J.D. Scholten, who one poll showed was trailing by 10 points in a district King usually wins by more than 20. Still, the Cook Political Report rates the race “Likely Republican,” and FiveThirtyEight gives the congressman a roughly 90 percent chance of keeping the seat.

If reelected next month, King would serve his ninth term in the House, despite the fact that his recent trip to Austria is just the latest flashpoint in a tenure marked by an astonishing array of offensive and incendiary comments, including when he:

Endorsed a white nationalist for Toronto mayor: Last week, King tweeted an endorsement of Faith Goldy, a Toronto mayoral candidate who has suggested that Canada is undergoing “white genocide” and repeated a white supremacist slogan on a podcast. Goldy was fired from her job at the Rebel, a far-right news site, after appearing on a podcast hosted by the neo-Nazi website the Daily Stormer. King described Goldy, who ended up losing the election, as “an excellent candidate,” saying she was “Pro Western Civilization and a fighter for our values.”

Faith Goldy, an excellent candidate for Toronto mayor, pro Rule of Law, pro Make Canada Safe Again, pro balanced budget, &…BEST of all, Pro Western Civilization and a fighter for our values. @FaithGoldy will not be silenced. https://t.co/uqkeaUjm7i

Said he didn’t want Muslims working at meatpacking plants: Earlier this year, King told Breitbart Radio that he didn’t want Somali Muslims preparing pork at the meatpacking plants in his district. King claimed that Somali Muslims wanted to send people to hell for eating the meat: “So as long as they’re preparing this pork for infidels, it helps send ’em to hell and it’ll make Allah happy,” King said. “I don’t want people doing my pork that won’t eat it. Let alone hope I’ll go to hell for eating pork chops.”

Retweeted a Nazi sympathizer: In June, King retweeted a post from self-described “Nazi sympathizer” Mark Collett, who was featured in a documentary called Young, Nazi and Proud. The tweet was a screenshot of a Breitbart article that claimed the majority of young Italians “oppose mass migration.” “Europe is waking up…Will America…in time?” King wrote. The congressman later said he hadn’t known about Collett’s political views, but he refused to delete the tweet. It wasn’t the only time King come under fire for retweeting white nationalists: A few months later, he shared a tweet from an “identitarian” radio personality with nativist views.

Praised far-right politicians: Over the past two years, King repeatedly has praised far-right leaders in Europe. In a tweet last year, he lauded the anti-Muslim Dutch politican Geert Wilders: “Wilders understands that culture and demographics are our destiny,” he wrote. “We can’t restore our civilization with somebody else’s babies.” The year before, he tweeted a photo of himself with Wilders and far-right German politician Frauke Petry, writing, “Cultural suicide by demographic transformation must end.” He’s also echoed comments made by Hungarian Prime Minister Viktor Orban, tweeting, “Diversity is not our strength.”

Diversity is not our strength. Hungarian Prime Minister Victor Orban, “Mixing cultures will not lead to a higher quality of life but a lower one.” https://t.co/ZlMXzcc87w

Questioned the contributions of nonwhite “subgroups”: On an MSNBC panel during the 2016 Republican convention, King suggested that nonwhite “subgroups” hadn’t contributed to the world as much as white people. After another panelist said the convention was full of “dissatisfied white people,” King responded: “This whole ‘white people’ business, though, does get a little tired, Charlie. I mean, I’d ask you to go back through history and figure out, where are these contributions that have been made by these other categories of people that you’re talking about? Where did any other subgroup of people contribute to civilization?” King then tried to soften his comments slightly by saying he was referring to “Western civilization.” He later told ABC News he’d meant that contributions by “Americans of all races stand far above the rest of the world” but stood by the claim that Western civilization was a “superior culture.”

Claimed Dreamers have “calves the size of cantaloupes”: One of King’s most infamous comments came back in 2013 when he railed against Dreamers in an interview with conservative website Newsmax. “For everyone who’s a valedictorian, there’s another 100 out there who weight 130 pounds because they’re hauling 75 pounds of marijuana across the desert,” King said.

Said terrorists would celebrate Obama: During the 2008 presidential campaign, King said terrorists would be “dancing in the streets” if Obama won because his middle name is Hussein. “I don’t want to disparage anyone because of their race, their ethnicity, their name, whatever religion their father may have been,” he told an Iowa radio station. “I’ll just say this: When you think about the optics of a Barack Obama potentially getting elected president of the United States—I mean, what does this look like to the rest of the world? What does it look like to the world of Islam?”