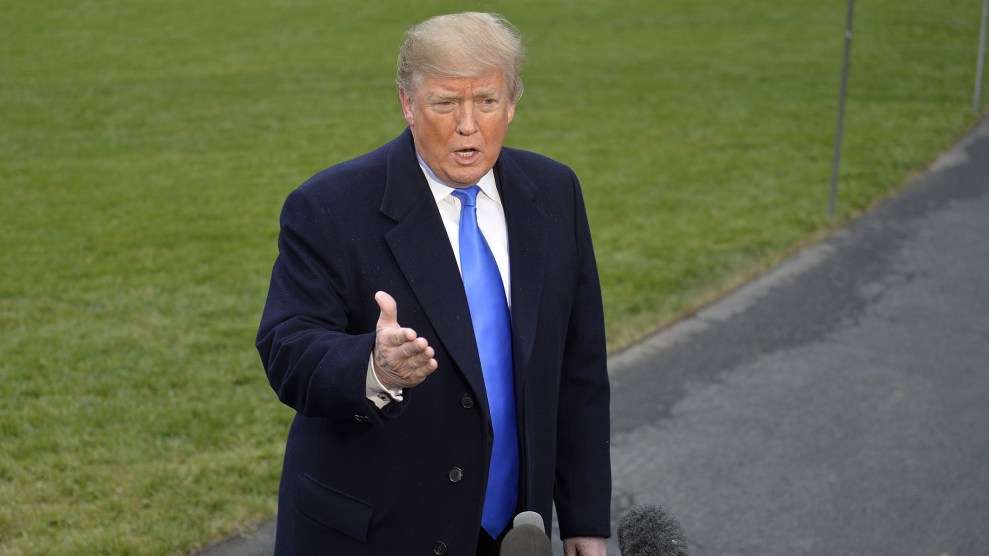 President Donald Trump answers questions prior to departing the White House for a day trip to Charlotte, North Carolina, for a campaign rally on October 26.Mike Theiler/CNP via ZUMA

President Donald Trump’s threat to use an executive order to end birthright citizenship for the children of undocumented immigrants is nothing new. Shortly before entering the Republican presidential primary in 2015, he brought up the same issue and claimed that “great legal scholars, the top,” do not buy into the long-standing interpretation of the 14th Amendment as a guarantee of citizenship to everyone born on US soil. But that notion did not come from the country’s top legal scholars. Instead, it’s been circulating in some conservative circles due to the work of two controversial scholars whose theories have been refuted by many other legal experts on the right.

One of those scholars is Lino Graglia of the University of Texas, a longtime opponent of affirmative action whose 1997 assertion that black and Hispanic students “are not academically competitive with whites” earned him the moniker “the most controversial law professor in America.” The other is John Eastman, a professor at Chapman University School of Law in California and chairman of the National Organization for Marriage, which works to oppose same-sex marriage. Eastman once equated homosexuality with “barbarism.”

Conservative media outlets, anti-immigrant activists, and some Republicans in Congress have embraced this argument. The congressional record from the 1860s, they argue, demonstrates that birthright citizenship was never intended to extend to the children of undocumented people. In August 2015, the conservative scholar Edward Erler laid out this argument in the National Review. In July of this year, Michael Anton, a former national security official in the Trump administration, adopted this theory and called for an executive order to instruct federal agencies that children of noncitizens are not citizens. The “entire case for birthright citizenship is based on a deliberate misreading of the 14th Amendment,” Anton wrote in a Washington Post op-ed.

Scholars on both sides of the aisle have pushed back against this idea. Garrett Epps, a liberal constitutional scholar, wrote in The Atlantic in July, “Erler’s work is, at best, scholarly malpractice. Anton’s reliance on this work is the constitutional equivalent of flat-earthism.” The congressional record, Epps argues, clearly shows that the members of Congress who wrote the 14th Amendment intended for it to include anyone born in the United States, with only narrow exceptions including the children of diplomats.

The Supreme Court took this view in 1898, when it ruled in United States v. Wong Kim Ark that a child of Chinese immigrants born in the United States was a citizen. “The fourteenth amendment affirms the ancient and fundamental rule of citizenship by birth within the territory, in the allegiance and under the protection of the country, including all children here born of resident aliens, with the exceptions or qualifications (as old as the rule itself) of children of foreign sovereigns or their ministers, or born on foreign public ships, or of enemies within and during a hostile occupation of part of our territory, and with the single additional exception of children of members of the Indian tribes owing direct allegiance to their several tribes,” the court ruled. “To hold that the fourteenth amendment of the constitution excludes from citizenship the children born in the United States of citizens or subjects of other countries, would be to deny citizenship to thousands of persons of English, Scotch, Irish, German, or other European parentage, who have always been considered and treated as citizens of the United States.”

In a clip of an interview released Tuesday by Axios, Trump said, “They’re saying I can do it just with an executive order. We’re the only country in the world where a person comes in and has a baby, and the baby is essentially a citizen of the United States for 85 years, with all of those benefits. It’s ridiculous. It’s ridiculous. And it has to end.” (In fact, many countries have birthright citizenship.) The president added that an executive order is in the works and “will happen.”

If Trump does issue an executive order, it would certainly face a legal challenge, and the administration would likely have to persuade the Supreme Court to overturn or reinterpret its 1898 precedent. That’s a longshot. Despite the small band of scholars who support Trump’s view of birthright citizenship, many conservatives do not agree with him. The libertarian Rep. Justin Amash (R-Mich.) tweeted Tuesday that a “president cannot amend the Constitution or the laws via executive order.” Even one of Trump’s own circuit court appointees disagrees with him. “Birthright citizenship is guaranteed by the Fourteenth Amendment,” Judge James Ho, a Trump appointee to the 5th Circuit Court of Appeals, wrote in 2006. “That birthright is protected no less for children of undocumented persons than for descendants of Mayflower passengers.”

While Trump is unlikely to succeed in convincing the Supreme Court and legal community to end birthright citizenship as we know it, he has successfully used the matter to turn national attention to issues of immigration just before the midterm elections. “The president cannot erase the Constitution with an executive order, and the 14th Amendment’s citizenship guarantee is clear,” Omar Jadwat, the director of the ACLU’s Immigrants’ Rights Project, said in a statement Tuesday. “This is a transparent and blatantly unconstitutional attempt to sow division and fan the flames of anti-immigrant hatred in the days ahead of the midterms.” The ACLU has filed a number of lawsuits against the Trump administration and would be likely to sue should Trump issue such an order.

More than three years ago, Trump entered the Republican primary with the false allegation that Mexico was sending rapists across the United States’ southern border. Two months later, he confounded his GOP rivals with a call to end birthright citizenship for the children of undocumented immigrants. Today, with another election looming, Trump has dusted off the same playbook. First, he made false accusations about the so-called caravan of people hoping to enter the United States. Now he is threatening to unilaterally undo birthright citizenship. It worked for him last time.