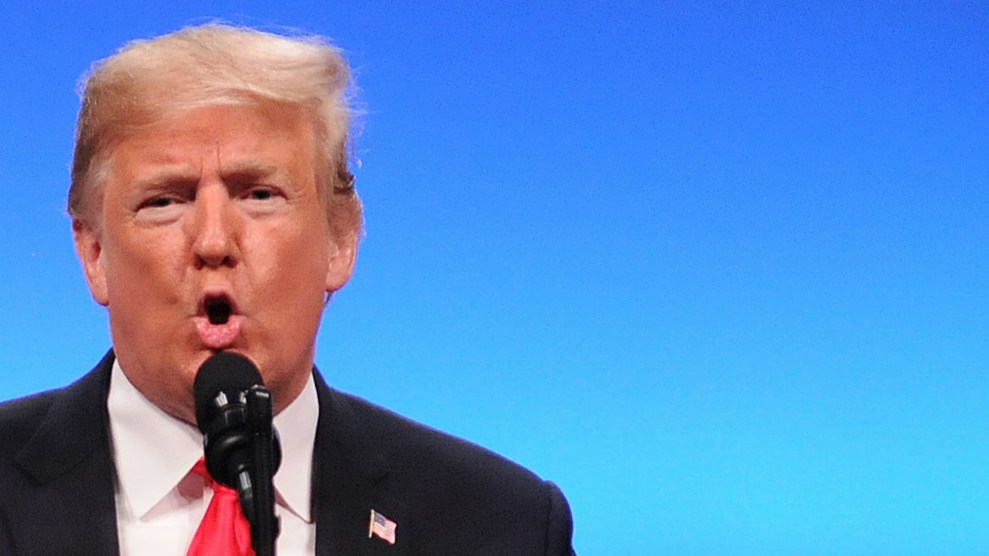 “As a candidate, I promised that we would protect coverage for patients with pre-existing conditions and create new health care insurance options that would lower premiums,” the op-ed declares, adding that he has “kept that promise.” While it’s true that Trump repeatedly made that promise during his presidential campaign, he’s actually done everything in his power to break it since becoming president. Trump spent most of 2017 championing Republican legislation to repeal Obamacare—bills that would have have allowed insurance companies to make policies unaffordable for people with preexisting conditions. When the House passed a bill last year that would have resulted in 24 million fewer people having health insurance, Trump summoned Speaker Paul Ryan and the rest of House leadership to the White House for a celebration. And earlier this year, the Trump administration signaled its support for an ongoing lawsuit to invalidate Obamacare, including the protections for people with preexisting conditions.

Trump also claims that health care premiums have come down on his watch. While it’s true that premiums on the Obamacare marketplaces are stable in 2019, that’s primarily because they already skyrocketed earlier in Trump’s administration thanks to the president’s efforts to weaken the law, such as ending the individual mandate. This handy premium tracker from the Kaiser Family Foundation shows how the average rate has gone up in states under Trump. In 2017, the national average was $359; by 2018, it was $481.

From there, the president pivots to attacking Democrats, arguing that if the party takes control of Congress, the country will turn into a socialist hellscape. “The truth is that the centrist Democratic Party is dead,” the op-ed says. “The new Democrats are radical socialists who want to model America’s economy after Venezuela.”

What’s so bad about the Democrats’ plan? Trump claims they want “open-borders socialism,” but he trains most of his fire on the Medicare-for-all proposals supported by many progressives. While Democrats are increasingly moving toward favoring some sort of single-payer health reform—many of the most prominent 2020 presidential contenders have signed onto a bill introduced by Sen. Bernie Sanders (I-Vt.), and even former President Barack Obama has voiced some support—the party is far from united behind the idea. That hasn’t stopped Republicans from running ads attacking Democrats over the policy proposal—even when those candidates haven’t actually endorsed Medicare-for-all.

Trump’s attacks on Medicare-for-all, moreover, are simply bizarre. At one point, the president writes, “The Democrats’ plan also would mean the end of choice for seniors over their own health care decisions. Instead, Democrats would give total power and control over seniors’ health care decisions to the bureaucrats in Washington, DC.” This makes no logical sense, because Medicare is already a federally managed program.

There is no one set policy proposal for single payer or Medicare-for-all. Some proposals would implement major changes to the program, such as ending the Medicare Advantage program, which allows seniors to enroll in a private insurance alternative where Medicare covers the costs. But regardless, most single-payer plans, such as the one introduced by Sanders, would actually increase benefits for seniors by cutting out copays and closing coverage holes. “In fact,” Sanders said in a press release rebutting the president’s op-ed, “we expand benefits. Millions of seniors today cannot afford the dental care, vision care or hearing aids they desperately need because Medicare does not cover these vitally important needs. Our proposal covers them.”

Trump also pushes a standard attack line against single payer—that it could lead to longer waits for doctor’s appointments and tests. In fact, the US already has longer wait times than other industrialized countries, most of which have some form of single-payer health care.