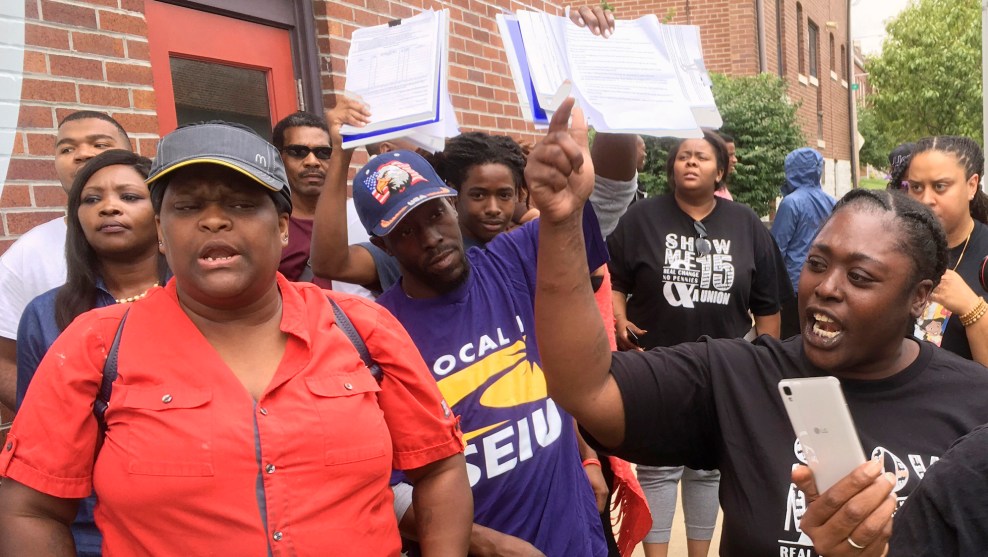 Cheyenne Mauzy loved her job working as a part-time childcare worker. It provided her the flexibility to take care of her 10-year-old son, who has an autoimmune disorder and frequently needs to see doctors three hours from their home in Springfield, Missouri. The problem was that making the minimum wage, just $7.85 in the state, barely made a dent in her household expenses.

“It was very hard to even pay one bill with my paycheck,” says Mauzy, a 28-year-old mother of three. “I loved certain parts of my job—I loved the flexibility that I had, that I didn’t have to worry about child care expenses, but it made it really hard because it wasn’t really supplementing the income my husband had.”

Even though Mauzy started a new full-time job in insurance billing a few weeks ago, making $11.22 an hour, she says the cost of childcare means the choice to work full time has just led to more financial tradeoffs for her family. Her situation as a working mom is exactly why she decided to get involved in phone banking and sharing her story for Missouri Jobs with Justice, a group that has been organizing in support of a ballot initiative that, if approved by voters in November, would raise the state minimum wage to $12 an hour by 2023.

“Seventy-seven cents an hour doesn’t seem like a lot,” Mauzy says, “but that’s a lot in a pay period. That adds up a lot when you’re a mom who has to go back to work.”

Voters in Missouri and Arkansas will decide at the ballot box in November whether to raise the minimum wage, an increasingly common tactic for the national fight for a fair wage. The federal minimum wage was raised to $7.25 an hour in 2009 and hasn’t budged since. Over the past nine years, that federal minimum has dropped drastically in spending power thanks to inflation.

While Washington, DC, has remained inactive, states have stepped in to help fill in the income gap. Since 2012, more than 20 states and over 40 counties have raised the local minimum wage in order to help working Americans try to keep up with inflated cost of living, which is increasing at the fastest rate in a decade. Currently, 29 states and the District of Columbia have a minimum wage that is higher than the national minimum, but even wages set above the federal level often aren’t enough. For instance, in Springfield, where Mauzy lives, a living wage for a single adult is roughly $10.32—and for a parent of three like her, that amount jumps to over $33 an hour.

“Seventy-seven cents an hour doesn’t seem like a lot, but that’s a lot in a pay period. That adds up a lot when you’re a mom who has to go back to work.”

In Arkansas, organizers behind this year’s ballot initiatives hope to build on momentum sparked in 2014 when the state last increased the minimum wage, raising it from $6.25 to $8.50 an hour via a ballot initiative that passed by 32 percent. Arkansans for a Fair Wage, the group behind the new ballot initiative, is now hoping frustration with a lack of further action from the state Legislature will drive voters to raise it again to $11 an hour by 2021. “This is something that voters should get to decide instead of the Legislature,” said Kristin Foster, campaign manager of Arkansans for a Fair Wage.

To Foster, who grew up in a family that struggled with poverty and now works at a children’s hunger nonprofit she co-founded, the issue of low wages is inextricable from the state’s high poverty level and high rates of food insecurity among seniors and children. “If you’re working full time, you should be able to pay your bills, you should be able to feed your kids,” Foster says.

Both efforts in Arkansas and Missouri have gotten a boost from the Fairness Project, a national organization which has helped pay for canvassers and television ads in both states. The resources provided by it and other organizations have given Arkansans for a Fair Wage the funds necessary to advertise on television and reach the state’s more isolated voters.

Raises in the minimum wage have been shown to significantly improve worker conditions. The Fairness Project estimates that since 2017, workers have collectively earned an extra $5.87 billion in states with minimum wages raised through ballot initiatives. A report from Arkansas Advocates for Children and Family found that almost 300,000 people, or one in four working Arkansans, would benefit from the minimum wage hike, resulting in an average income bump of $1,500 per year. In Missouri, 677,000 workers will be directly or indirectly impacted by the wage increase, Tony Wyche, spokesperson for Raise Up Missouri, told Mother Jones.

“I think there’s a greater sense of urgency in doing something that will directly benefit workers,” says Laura Huizar, a staff attorney with the National Employment Law Project, which has supported efforts in both states. “It’s also very clear that those economic gains haven’t been shared by everyone.” Despite a five-year low in unemployment and steady GDP growth, workers’ wages across the country have remained stagnant for decades.

A fair wage, often pegged at $15 an hour, has also become a mainstream talking point for Democrats in the midterm elections, but advocates say its popularity with voters shows the issue has a strong hold outside partisan fighting. “What’s interesting across all these issues across all states is…that when you strip away from all the theater of politics,  they want higher wages, they want health care, they want time to take off when their child is sick,” says Jonathan Schleifer, executive director of The Fairness Project.

But despite strong popularity among voters, business interests still pose significant challenges. In early September,  a coalition of pro-business groups, including the Chamber of Commerce, petitioned the Arkansas Supreme Court to invalidate the proposal, claiming Arkansas for a Fair Wage did not follow proper procedure in gathering signatures. The petition was cleared this week by an arbitrator appointed to the case, but is still pending Arkansas Supreme Court approval.

In other states, state legislatures have attempted to thwart higher minimum wages using the legislative process. In Michigan, state lawmakers approved paid sick leave and minimum wage laws in order to put a stop to an upcoming ballot referendum. By doing so, the GOP-led Legislature lowered the threshold for a vote to overturn the laws later in the session—which some lawmakers are already saying they plan to do after the November election. Missouri has seen state lawmakers pass preemption laws in order to thwart local raises in places like St. Louis (in that case, the decision was thrown out in court).

Mauzy is optimistic voters in Missouri will see stories like hers and approve this year’s ballot initiative. “It’s not just people not trying—our minimum wage has not grown and the cost of living has,” she says. “What is a job if it’s not to pay your bills, and if you can’t pay your bills on the minimum wage, what’s the point?”