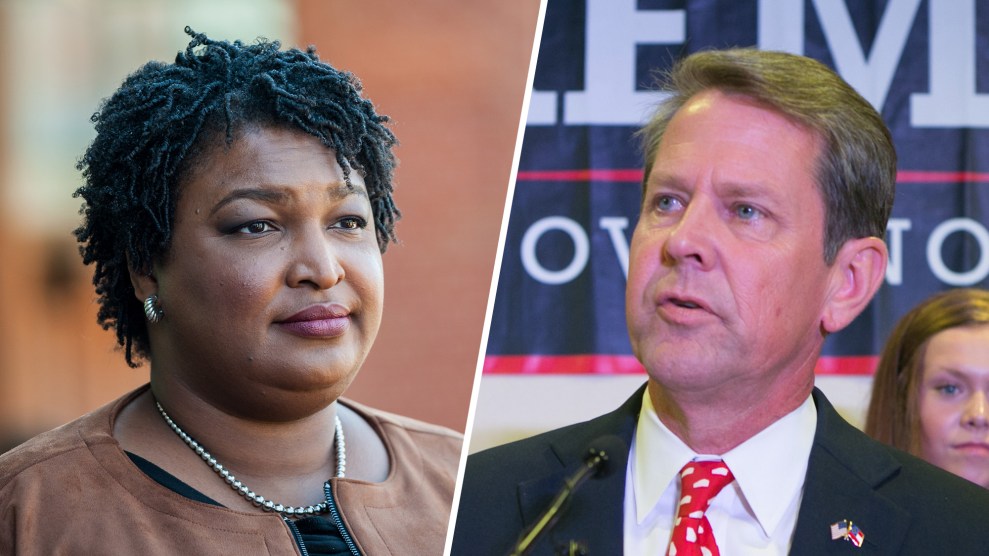 Georgia’s dramatic, divisive, and hotly contested gubernatorial race between Republican Brian Kemp and Democrat Stacey Abrams isn’t over yet. But the writing on the wall, as the Abrams campaign holds out hope for absentee and provisional ballots, is that Kemp will ultimately be declared the winner.

As of Thursday afternoon, Kemp led Abrams by just under 63,000 votes, claiming 50.33 percent of the total vote. That puts Kemp barely over the state’s 50 percent threshold to avoid a runoff. The Abrams campaign needs to make up about 25,000 votes in order to bring Kemp under 50 percent and trigger a runoff on December 4. But political observers are skeptical that there are enough votes out there in uncounted absentee and provisional ballots to push the race into a runoff.

“Even if there were enough votes out there, she would have to do so exceptionally well among them to overcome it,” says Charles Bullock, a political science professor at the University of Georgia. “You hate to give up, but I think it’s a long, long shot that she would be able to pull this into the range where they’d have to have a runoff.”

On Wednesday night, the Abrams campaign laid out its case that the race is not over: It needs just under 24,000 more votes to secure a recount—and just over 25,000 for a runoff—and there are about 25,000 absentee and provisional ballots outstanding. But by the Abrams campaign’s own numbers, it looks like an impossible climb. Nearly every outstanding ballot would have to be counted, and nearly every one would need to have been cast for Abrams or a third-party candidate. On Thursday, attorneys for the Abrams campaign stressed at a news conference that some military and overseas absentee ballots remain uncounted. The campaign set up a hotline for voters to call for help with absentee or provisional ballots.

Confident of coming out on top, Kemp declared victory Thursday, then resigned on from his position as secretary of state to prepare to take over the governor’s mansion. (His resignation came as a hearing in federal court over whether he should oversee the counting of ballots in his own race was about to proceed.) Meanwhile, Abrams and other groups continue to flag potential problems with the election.

Voting rights advocates are raising concerns that some people who should have been given a regular ballot on Tuesday were instead denied the right to vote or told to cast a provisional ballot because their registration had been marked as “pending” according to protocols implemented by Kemp. There are approximately 53,000 Georgians, the majority of them voters of color, whose registrations are pending, but they should still have been permitted to vote with a regular ballot. However, reports came in on Tuesday that hundreds of voters on the pending list were being denied a ballot or forced to cast a provisional one.

On Thursday, the Lawyers’ Committee for Civil Rights under Law, a civil rights group that has been involved in multiple lawsuits to make it easier to cast a ballot in Georgia, said the problem appeared to be particularly bad in Hall County, located north and east of Atlanta. Before the election, a federal judge ruled that newly naturalized citizens whose state records may not indicate their new status as citizens—who make up a subset of the 53,000 “pending” voters—must be allowed to vote. But in Hall County, these new citizens may have run into problems. “Instead of allowing eligible voters the right to vote, officials subjected certain voters to the burden of going to the county elections office to provide proof of citizenship instead of accepting this documentation at the polling site as explicitly required under the court’s order,” Kristen Clarke, president of the Lawyers’ Committee, said in a statement. “Moreover, some voters who are limited English proficient were denied their right to receive assistance from a person of their choice. The actions of Hall County officials imposed barriers and restrictions that impaired the rights of minority voters seeking to vote on Tuesday.”

But even if this is true, there’s little that can be done now to correct it, except to try to ensure that provisional ballots cast by eligible voters are counted.

Meanwhile, the Abrams campaign says it will turn to litigation to ensure that absentee ballots are counted in Dougherty County, a majority-black county that’s home to the city of Albany. According to the Atlanta Journal-Constitution, the lawsuit will allege that the county delayed sending out absentee ballots and will ask a judge to force the state to count ballots that were returned after the deadline.

The Democratic National Committee, meanwhile, is trying to help the Abrams campaign track down people whose ballots are in limbo and need to confirm their eligibility for their provisional votes to be counted.

Kemp’s decision to remain secretary of state while running for governor generated controversy. It shined a spotlight on policies, implemented and supported by his office, that make it harder to register, cast a ballot, and have that ballot counted. Democrats repeatedly called on him to resign throughout the campaign. He finally acquiesced on Thursday, confident in his victory. Outgoing Gov. Nathan Deal, a Republican, appointed Robyn Crittenden to fill in temporarily as interim secretary of state. Crittenden is a longtime Deal ally who currently leads the state’s Department of Human Services. The race to replace Kemp for the next four years does appear headed for a runoff on December 4.

As for Abrams, many in Georgia are wondering why she hasn’t conceded yet. “With each passing day, each passing hour, she has to acknowledge to herself…that this isn’t going to happen,” says Bullock.

A Democratic political consultant in Georgia agrees that she should concede. “I don’t think it’s good for her, for her future,” says the consultant, who asked to remain anonymous. Even though she fell short, he believes, Abrams showed she can win a statewide race in Georgia, and there’s a Senate race around the corner in 2020. He adds, “It’s almost like they can’t believe that she lost.”