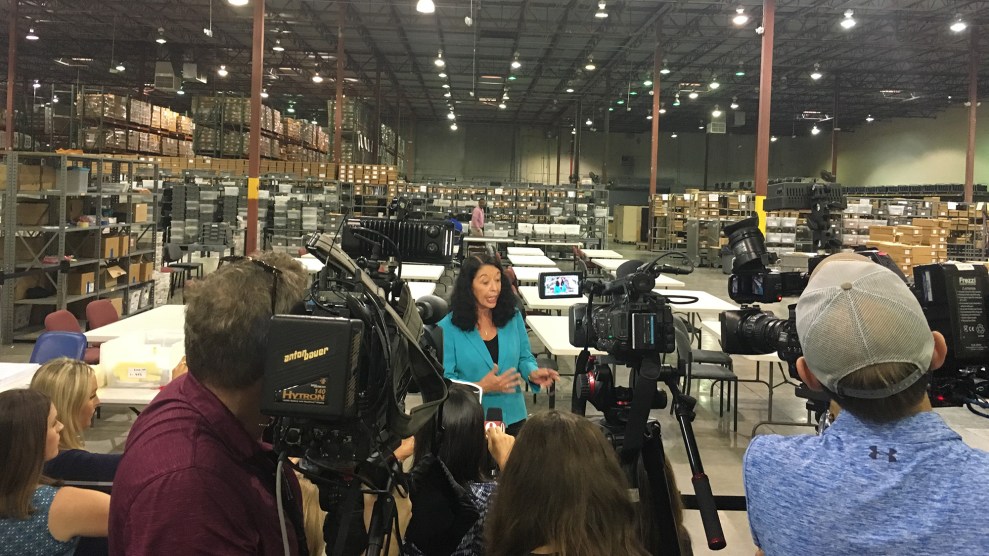 With a 3 p.m. deadline looming to complete a machine recount in Florida’s contentious elections, Palm Beach County’s supervisor of elections announced Thursday morning that her county was unlikely to finish the machine recount in any of the three contested statewide races. “It was not for lack of human effort,” Susan Bucher told reporters Thursday morning in her warehouse facility. But when machines fail, she added, “there’s not a lot I can do about it.”

Palm Beach has older vote-tabulating machines than other counties. The result is not just that the counting takes longer, but the machines have suffered breakdowns and mechanical errors: On Tuesday night, Bucher announced that machines had overheated and forced the county to restart the count of about 175,000 early votes. If the county can’t make the deadline, in accordance with state law, Bucher will instead submit the county’s preliminary results, which she already transmitted to Tallahassee on Saturday.

Though the county is on the clock, there are few signs of scrambling inside the large warehouse where all the ballots are stored and counted. Around noon, a few staffers began feeding ballots, one by one, into the county’s tabulating machines, a stark contrast to the rapid counting at the newer machines an hour south in Broward County. The press and campaign aides sequestered in the front of the warehouse vastly outnumbered the staffers tallying on the other side of a rope barrier.

Bucher says her staff is preparing for the manual recount that is expected to begin later today. Any race with a margin of .25 percent or less after the machine recount is completed on Thursday afternoon will then head to a hand recount. The race for US Senate, between incumbent Democrat Bill Nelson and Republican Gov. Rick Scott, is expected to require a manual recount, as is the state agriculture commissioner race, while the governor’s race was outside the margin for a hand recount when preliminary results were released.

Bucher tried to get the state and the courts to extend Thursday’s deadline, knowing it would be difficult for her county to meet it in every race. Unlike newer machines in other counties, Palm Beach’s machines can recount only one race at a time. This slowed down the process considerably. Adding to the county’s troubles was a new technical snafu on Thursday: Multiple boxes of ballots were somehow dropped from the recount tally. Now, election workers have to go back and figure out which ones are missing and add them back in. Unless they can do that by 3 p.m., their tally won’t be done on time.