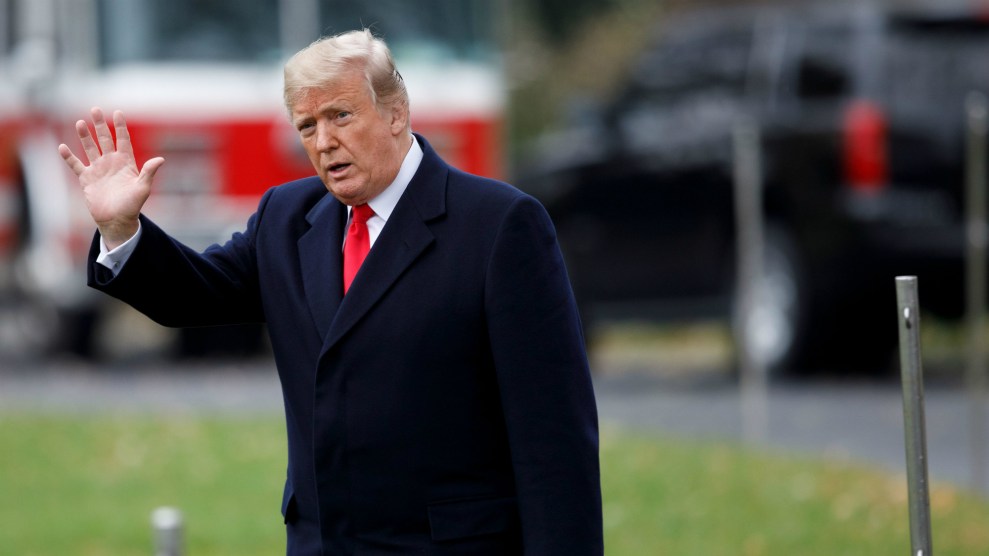 On Thursday morning, German police raided the Frankfurt headquarters of Deutsche Bank, President Donald Trump’s biggest lender, in connection with a money laundering investigation. The raid focused on an alleged money laundering operation that may have involved as much as $350 million and was exposed with the 2015 release of the Panama Papers—a trove of documents detailing the creation and use of offshore bank accounts. The investigation is the latest in a string of scandals and financial setbacks for the bank, which holds the mortgages on several of Trump’s most prized properties, including his Doral golf resort and his Washington, DC, luxury hotel. Speculation for months has swirled around the possibility that another company could take over the ailing bank—including rumors that the Industrial and Commercial Bank of China, a Chinese state-owned bank, might be interested. This is significant because any entity that controls a large chunk of Trump’s debt holds a certain amount of leverage over him—an unprecedented situation in the history of the US presidency.

Trump has a long relationship with Deutsche Bank dating back to the early 2000s. At the time, most US banks refused to loan money to Trump following his string of bankruptcies and Atlantic City failures. But Deutsche Bank continued to let him borrow hundreds of millions of dollars—as of his inauguration, Trump owed the German bank as much as $364 million. Once a powerful player in international banking, Deutsche Bank has paid out billions in settlements to both US and European regulators for its role in the 2008 financial crisis and other scandals. When Trump took office, he refused to divest from his company, meaning he continues to owe the bank money—several of the loans are personally guaranteed by the president—even as the Department of Justice has opened new investigations into the bank’s activities.

In 2017, the bank paid regulators $670 million in fines for its involvement with “mirror trades” in Russia—a complicated scheme to allegedly help wealthy sanctioned Russians move currency out of the country. Deutsche Bank is also embroiled in a scandal involving Danske Bank, a Danish company, which allegedly was involved in laundering billions of dollars from Russia. Danske is under heavy scrutiny from the Justice Department and European regulators, and Deutsche Bank has reportedly been contacted by US investigators for its role in handling some of Danske’s suspect transactions.

Thursday’s raid is not related to either of those scandals. In a statement, the bank confirmed it had been raided in connection with offshore transactions revealed in the Panama Papers, and said it is cooperating with the investigation.

The fines and ongoing controversies have sent Deutsche Bank into a financial tailspin and tanked its stock price, which in turn has raised the possibility of a takeover. In July, Deutsche Bank’s stock briefly rallied after it was reported by the German business press that JPMorgan and the Industrial and Commercial Bank of China were both interested in taking big stakes in the troubled bank. A scenario in which the Industrial and Commercial Bank of China, which is the country’s largest bank, took control of Trump’s mortgages would potentially pose an enormous conflict of interest for Trump, if not a national security threat. That said, the bank is already the single largest tenant in Trump Tower, and its lease is due to expire in October 2019, setting up another major conflict.

Even as it stands, Deutsche Bank’s ownership is rife with conflict of interest landmines for the president. Currently, Chinese financial giant HNA Group, which has sparred with American regulators, owns 8 percent of the German bank—though it is under pressure to sell that piece. American hedge fund Cerberus Capital—co-founded by Stephen Feinberg, a major Trump donor whom the president appointed to head his intelligence advisory board— owns another 3 percent.

The White House did not return a request for comment on whether the administration has any plans for how to handle conflict of interest concerns if Deutsche Bank is taken over.