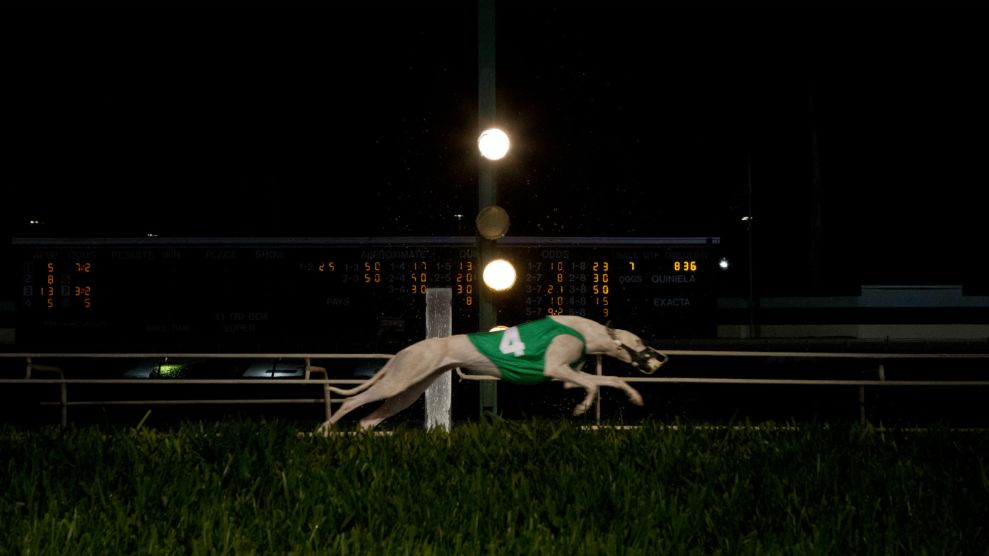 A greyhound crosses the finish line at the Palm Beach Kennel Club in Florida on Dec. 11, 2015.Brianna Soukup/ZUMA

Update: 11/6/18, 9:45 pm: In a victory for animal-rights advocates, Floridians passed Amendment 13 on Tuesday. The state will have until 2020 to phase out wagering on greyhound racing in the state.

Just over five years ago, a greyhound trainer in Jacksonville, Florida, released a group of race dogs from their kennel to sprint before a competition. It was early in the morning, and the track was dark. After their training session, he brought the dogs back inside and realized one, a 2-year-old named Hallo Spice Kay, was missing. Returning outside, he found her dead, likely from colliding with a fence at the end of the track. A report from state investigators two months after the incident concluded that “the death could have been prevented had the greyhound not been sprinted in the dark.”

This case is just one of more than a hundred reported every year, on average, in which greyhounds have died from race-related injuries or illness nationwide, according to advocates pushing for an end to the controversial sport. For years, animal-rights groups have been sounding the alarm about the dangers of greyhound racing, which has, to a large extent, become a relic in the United States. The main exception is Florida.

Once a mid-20th-century sensation, the sport has since been phased out in more than 40 states due to concerns of animal cruelty in kennels and on the track, paired with declining revenue. A few states have held out in addition to Florida—including Alabama, Arizona, Arkansas, Iowa, Texas, and West Virginia—but being home to 11 out of the country’s 17 tracks makes Florida the sport’s epicenter.

“It’s not just one more state phasing out greyhound racing. It is the most important state…This really is the last holdout.”

That could all change on Election Day, as Floridians vote on Amendment 13, a constitutional amendment that would ban wagering on greyhound racing by 2020, which, if passed, could deliver a fatal blow to the sport. “This is really a moment in time for Floridians,” Kitty Block, acting president and CEO of the Humane Society of the United States, tells Mother Jones. “It’s not just one more state phasing out greyhound racing. It is the most important state…This really is the last holdout.”

Opponents of the amendment—fans, industry players, and some greyhound adoption groups—largely agree. As Jack Cory of the Florida Greyhound Association, which opposes the amendment, put it to Mother Jones, a passing vote in Florida would be “devastating to the industry.” This has translated into a sometimes-heated battle whose result could create a domino effect, potentially ending greyhound racing nationwide once and for all.

Greyhound racing has been a major sport in the Sunshine State since 1931, when it became the first state to legally allow wagering on the races, “primarily as a way to bring more revenue to the state during the Great Depression,” according to the Greyhound Racing Association of America.

Fast-forward to 2018, and the sport has since hit record-low attendance and declining revenue. Greyhound tracks in Florida lost $35 million statewide in 2012, according to a study funded by the state legislature, with only three out of 14 tracks turning a profit from greyhound racing at the time of the study. Between 1992 and 2017, money wagered on greyhound racing in the state slumped from $1.5 billion (adjusted for inflation) to a little over $200 million, the Associated Press reports.

So without the option to gamble, which would be removed by Amendment 13, greyhound racing in the state would likely suffocate, even as facilities continued other gambling operations.

The fight over the impending vote has been contentious at times and a not-insignificant amount of money has flowed into the Yes on 13 campaign. Animal rights organizations, led financially by the Doris Day Animal League, and others have contributed nearly $2 million to the Yes on 13 Campaign, according to Florida’s Department of State. The groups’ primary argument comes down to the well-being of the animals; the Humane Society, which also supports the amendment, argues the physical toll it takes on the dogs makes racing a “bleak and sordid enterprise for the animals.” Making matters worse, they argue, are the conditions for the dogs; in 2006, Florida Department of Business and Professional Regulation investigator estimated greyhounds can be kept in cages between 20 and 23 hours per day (though some kennel owners have denied it).

“This is still a thing—and it’s not going away on its own,” Block, of the Humane Society, says. “Unless we take action, it’s going to continue, and dogs are going to continue to die for no purpose really, other than entertainment for some people who like to bet.”

The sentiment is echoed in a video released in June by the Yes on 13 Campaign, which begins, “Welcome to Florida, where every three days a [greyhound] dog dies,” over video footage of greyhounds tripping and falling on a racetrack. The statistic, frequently repeated by animal rights groups, refers to state-mandated industry reports between May 2013 and November 2014, and analyzed by the Massachusetts-based greyhound advocacy group Grey2K. According to the analysis, 183 greyhounds died on the grounds of a greyhound track or kennel compound during the reporting period, or one every three days.

On the other side, Cory, from the Florida Greyhound Association, calls the statistic about deaths “misleading,” because it includes dogs that died of natural causes. (“Fluffy can die of cancer on the living room couch,” he says.) “I’ve been to every greyhound track, every greyhound farm in the State of Florida. If there was any abuse, if there was any mistreatment, I would not be here. I would not be on this phone conversation,” he says. (Still, according to the state records analyzed by Grey2K, 93 greyhounds died or were euthanized for “race-related reasons,” mostly due to injuries, during that period.)

Racing supporters like Cory also argue that these injured dogs are just a small fraction of the thousands that race each year in Florida and, in addition to the money the sport brings in for the state, racing itself is also good for the dogs. They say healthy, happy dogs make the best athletes, so mistreating them isn’t an option. Injuries, they argue, are part of the gig, just like any sport.

“That’s what athletes do, whether it be human athlete or an animal athlete. Why should kids 18, 19 years old be bouncing around on the football field? It’s what they want to do,” Cory says, seeming to reference and downplay the effect of head injuries on young football players. “Are there dangers? Or course there’s dangers. When I ran track a zillion years ago on a cinder track, was there dangers? Sure there were, but that’s what you want to do when you’re that age.”

A video released by the amendment’s primary opposition group, the Support Greyhounds—Vote No campaign, whose slogan is “Born to run, fueled by love,” captures Cory’s arguments:

“The truth is,” the website for Support Greyhounds—Vote No, which did not respond to a request to comment, reads, “Racing Greyhounds like many working breeds such as Labrador Retrievers who are used when hunting, Sled Dogs who participate in racing, horses who race or participate in show jumping, or even dogs who herd sheep or then participate in agility contests—are all animals with jobs which keep them happy, healthy, in top condition and accomplishing what they have been bred to do for centuries.”

The campaign against the amendment is significantly less well-funded than the other side; Support Greyhounds has raised just over $70,000, according to state records.

Both sides have accused the other of spreading false information. In an op-ed for the website FloridaPolitics.com, Cory contends that “‘False’ information is being put forth by very radical out-of-state animal rights (AR) groups and their misinformed supporters… They are the same groups that put on the sad puppy commercials over the holidays. They use this ‘false’ information for fundraising, not to take care of any animals in Florida!”

In a Humane Society blog post, Block writes Amendment 13’s opposition is using “baseless and deceptive tactics” to mobilize voters. And when Mother Jones asked her to respond to Cory’s claim that greyhounds enjoy racing, she answered sharply: “No, they don’t love running so hard that they break their necks and they get broken backs… Greyhound racing is not about the human-dog bond. It’s a business. And it’s a business where dogs die.”

“It’s going to take time, but what is left after Florida stops racing greyhounds and it winds down, it will really be a skeleton of what it once was.”

With only a few days left until the midterms, Carey Theil, executive director of Grey2K and senior adviser to the Vote Yes on 13 campaign tells Mother Jones he is “confident” the measure will get a majority of votes, but worries it may not get the 60 percent of votes required to pass a proposed constitutional amendment. “We believe that when voters look at this industry in totality, and ask themselves, ‘Would you treat your dog this way?’ they’ll vote yes.”

Months-old polling conducted by the Yes on 13 campaign found that 70 percent of people support the measure, after hearing arguments on both sides of the debate. But unlike most hot political topics, this amendment is a “low-information” issue, argues Theil, and voters can be swayed depending on which information they digest. It’s therefore hard to know how Tuesday will go, especially with voters in Florida so energized over tight races for governor and the Senate.

If Yes on 13 does succeed, activists hope other states may follow suit. “Assuming it does pass, that Florida, the hub of the industry, has made the right choice and is phasing this out—that does give momentum for the humane movement to phase it out in other states as well,” Kate Macfall, Florida director for the Humane Society, tells Mother Jones. After all, a win in Florida could wipe out 60 percent of the industry. “It’s going to take time, but what is left after Florida stops racing greyhounds and it winds down, it will really be a skeleton of what it once was.”

Now, nearly a century after the first greyhound track was built in the state, the fate of this breed is in the hands of Florida voters. “For us, this is the whole enchilada,” says Block.