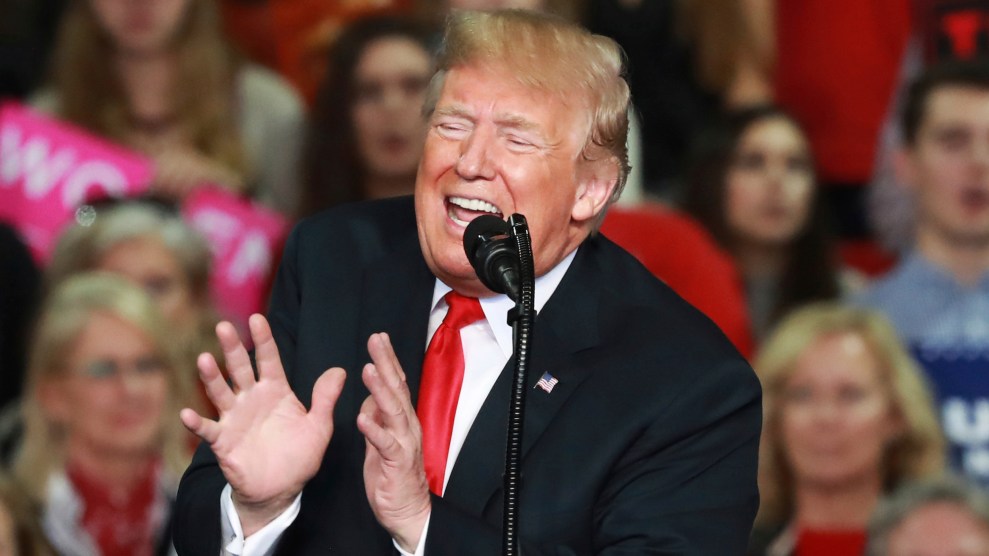 U.S. President Donald Trump delivers a campaign speech for governor candidate of Georgia Brian Kemp who is Secretary of State in Macon, Georgia on November 4, 2018. ( The Yomiuri Shimbun via AP Images )Daisuke Tomita/AP

The Trump ad features Luis Bracamontes, an undocumented immigrant convicted of killing two California sheriff’s deputies in 2014, before cutting to images to members of the migrant caravan who are walking toward the United States. The ad calls the caravan an “invasion.” As Mother Jones has reported, caravan members are weeks away from the United States, and there is no reason to believe they will overwhelm border officials, nor is there evidence that it’s full of criminals, as the president has repeatedly claimed.

Fox News’ decision to stop running the ad comes after the channel’s anchors and guests speculated baselessly about whether members of the caravan will bring crime and disease to the United States. David Ward, a retired Border Patrol agent, said on Fox News last week that caravan members could bring smallpox to the United States. Ward appeared to be unaware that smallpox was eradicated decades ago.

NBC’s decision to pull the ad comes one day after the network aired it on Sunday Night Football, which drew 21 million viewers. An NBC spokesman said on Monday, “After further review we recognize the insensitive nature of the ad and have decided to cease airing it across our properties as soon as possible.”

It is unclear why any further review was necessary. CNN refused to air the ad in the first place and made it clear over the weekend that it believes the ad is racist.

CNN has made it abundantly clear in its editorial coverage that this ad is racist. When presented with an opportunity to be paid to take a version of this ad, we declined. Those are the facts. 🍎

Facebook decided to block paid distribution of the ad after Fox News and NBC pulled it. A company spokesman said in a statement, “This ad violates Facebook’s advertising policy against sensational content so we are rejecting it. While the video is allowed to be posted on Facebook, it cannot receive paid distribution.” The Trump campaign spent between $27,00 and $94,000 to promote the ad on Facebook, and it was seen by up to 5 million users, according to Facebook data reviewed by the Daily Beast.

Trump campaign manager Brad Parscale attacked CNN, Facebook, and NBC for not running the ad. “The #FakeNewsMedia and #PaloAltoMafia are trying to control what you see and how you think,” he wrote on Twitter on Tuesday. Parscale did not mention the rejection from Fox News.