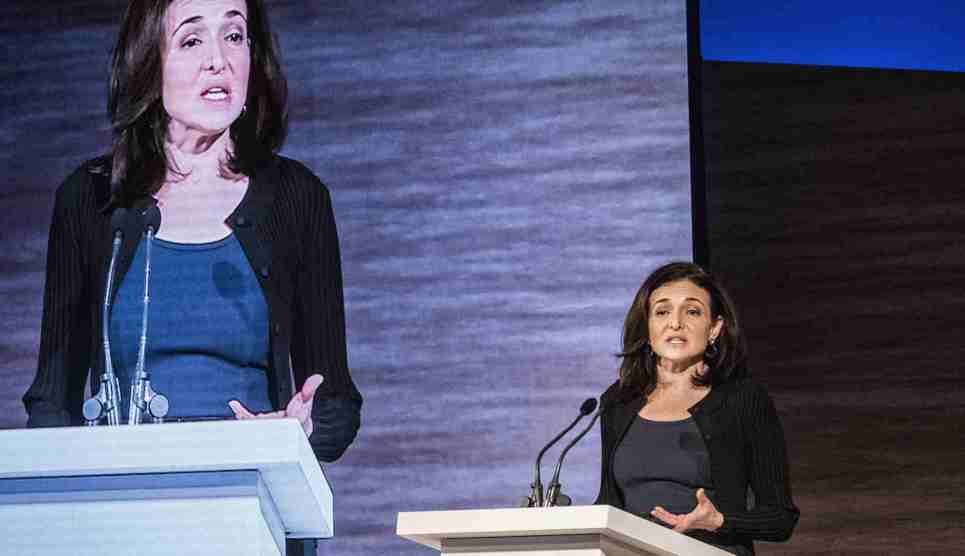 Sandberg initially said she was not aware of Definers work with Facebook.Tim Dirven/Reporters via ZUMA Press

For a little over an hour on Thursday afternoon, Facebook COO Sheryl Sandberg met with activists from Color of Change, a group smeared by a conservative research agency hired by Facebook. During the meeting, the group was able to secure some of its demands, including a public release of Facebook’s independent investigation into civil rights violations on the website. “In yesterday’s meeting, Sheryl Sandberg made an apology to Color Of Change for the anti-Semitic and anti-black smears orchestrated by Definers Public Affairs and also committed to a public update on the civil rights audit by the end of the year,” Color of Change director Rashad Robinson said in a statement.

During the meeting, which Facebook CEO Mark Zuckerberg briefly joined, Sandberg told Color of Change that Facebook will evaluate its relationships with consultants to make sure no other contractors were engaged in smearing critics. According to a press release from Color of Change, the company will “evaluate its policies and end practices that leave black people, communities of color and other users in harm’s way and subject to hate speech and other forms of discrimination.”

“Before, it was a black box. For the first time, we have a clear commitment from Facebook that we will have a report by the end of the year,” Color of Change Director Rashad Robinson tells Mother Jones. “And that’s really important and we will hold them accountable to that.”

As Mother Jones reported on Tuesday, Facebook’s lack of commitment to releasing a public report detailing its civil rights audit has been a huge frustration for the civil rights groups its relied on for feedback. On Wednesday, both Color of Change and the Leadership Conference on Civil and Human Rights, another organization involved with the audit, sent a letter to Facebook with a list of demands, including a public release of the audit.

But just hours after Thursday’s meetings, a New York Times story revealed that Sandberg had withheld one key piece of information. Contrary to her earlier deflections, internal emails showed that Sandberg had requested research on billionaire George Soros, the donor whose contributions were made a subject of criticism by Definers.

A little over two weeks ago the New York Times revealed that Facebook had hired right-wing opposition firm Definers. The day after the story, Facebook CEO Mark Zuckerberg and Sandberg denied any knowledge of Definers’ work with Facebook. But the evening before Thanksgiving, already outgoing Director of Communications Elliot Schrage took responsibility for hiring the firm. Only in response to that note did Sandberg acknowledge that Definers had been mentioned to her in several emails and their work had been referenced in materials she received.

Facebook maintains that while Sandberg did request information on Soros, she was not explicitly involved in hiring Definers, nor did she direct research into other critics. “I also want to emphasize that it was never anyone’s intention to play into an anti-Semitic narrative against Mr. Soros or anyone else,” Sandberg wrote. “Being Jewish is a core part of who I am and our company stands firmly against hate. The idea that our work has been interpreted as anti-Semitic is abhorrent to me—and deeply personal.”

But Robinson says the answer is unsatisfactory. “It’s one thing to ask for research,” he says, “it’s another thing to use anti-Semitic and anti-black tropes to undermine critics.” During Thursday’s meeting, Facebook would not commit to demands from Color of Change and other groups to release any other research Definers had gathered on the company’s critics.

The company still has yet to deal with other demands from civil rights organization. The letter sent by Color of Change and the Leadership Conference earlier this week also listed recommendations for the audit, including a public report for the timeline for implementation of the review and a public-facing committee to ensure implementations of the report’s recommendations. Independently, Color of Change has advocated for the firing of Joel Kaplan vice president of global public policy at Facebook because of his connections with Definers. Robinson says that Color of Change will not accept any audit that passes through Kaplan’s office.