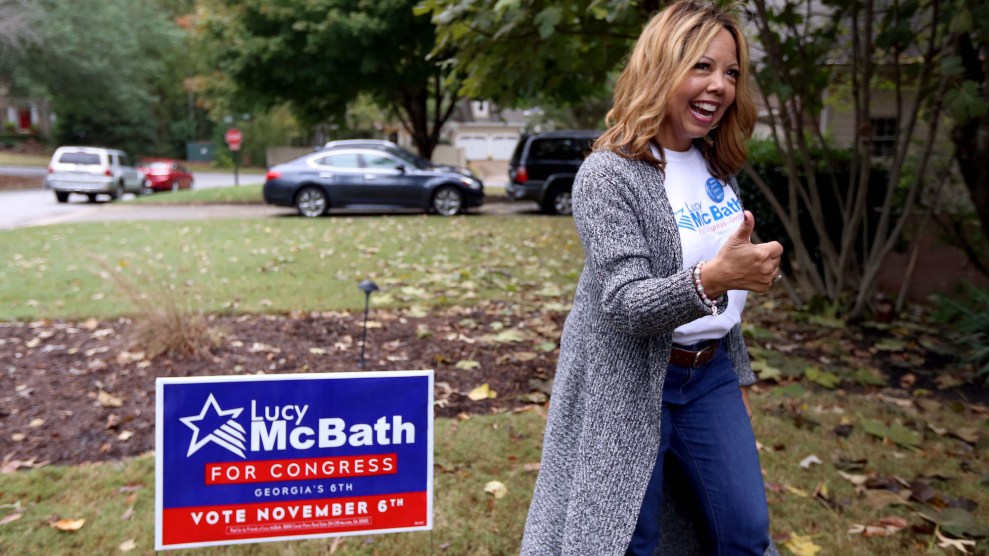 Gun safety activist Lucy McBath, who was elected to Congress this week in Georgia's 6th district, lost her son Jordan Davis in a 2012 shooting.Iris Schneider/ZUMA

Gun control advocates are planning an aggressive legislative strategy when Congress reconvenes in January. Working closely with key lawmakers, they hope to use the new Democratic House majority to force votes on a raft of reforms that have been blocked repeatedly by Republicans—including expanded background checks, funding for research on gun violence, and a so-called “red flag” law designed to keep firearms out of the hands of people who pose a danger to themselves or others.

By many measures, Election Day was a major win for the gun control movement. When the counting is done, more than 30 GOP-held seats will have fallen to Democratic challengers, nearly all of whom have voiced support for stricter firearms laws. The election followed a series of devastating mass shootings and took place just one day before a gunman opened fire at a Southern California bar, killing at least 12 people—tragedies that add a sense of urgency to the issue.

“These victories give us the opportunity to frame things at the federal level.”

Democrats haven’t controlled a chamber of Congress since 2014, and Republican leaders have generally refused to even bring gun safety bills to a vote. Even when Democrats were in charge, they were unable to pass significant gun reform legislation. In the wake of the 2012 Sandy Hook massacre, the Democratic majority in the Senate couldn’t pass a bipartisan measure to expand background checks because five senate Democrats joined most Republicans in filibustering the bill.

But the politics of gun control—thanks in no small part to the activism that followed the February school shooting in Parkland, Florida—have since shifted markedly, aligning Democratic politicians more closely with the gun violence prevention movement’s priorities. For the first time in recent memory, numerous Democrats in competitive races ran—and won—on the gun issue. “These victories give us the opportunity to frame things at the federal level,” says Kris Brown, a co-president of the Brady Campaign to Prevent Gun Violence.

That doesn’t mean major gun control bills will become law anytime soon. Republicans—who by and large oppose stricter gun measures—increased their majority in the Senate, making it unlikely that the upper chamber would approve gun legislation passed by the House. Instead, gun control groups and their congressional allies say, they plan to use a series of House votes to force Republicans to go on record supporting or opposing popular firearms legislation.

In a five-point action plan for the 116th Congress unveiled Wednesday, the gun safety group Everytown listed universal background checks for firearms purchases as one of its top priorities. Currently, only federally licensed dealers are required to perform background checks, meaning that private venders at gun shows and elsewhere can sell weapons without screening buyers.

Brown describes universal background checks as the “logical starting point”; more than 90 percent of Americans voiced support for them in a poll earlier this year. Legislation on the issue is almost certain to come to the floor when Congress reconvenes—House Minority Leader Nancy Pelosi (the frontrunner to be speaker) has promised as much—and the measure will likely succeed. A bipartisan version of the bill, introduced in the current session of Congress by Reps. Mike Thompson (D-Calif.) and Peter King (R-N.Y.), has 207 cosponsors, including 14 Republicans. (Five of those Republicans are returning to the House, while eight of the nine others have been replaced by Democrats.) GOP leaders have refused to bring the current bill to the floor.

Everytown’s priorities also include disarming domestic abusers, implementing red flag laws, and funding gun violence prevention research—something the Centers for Disease Control and Prevention have long been prohibited from doing. Absent from their list are measures that ban assault weapons or high-capacity magazines, despite the fact that such restrictions were a key demand of student activists in the wake of Parkland. Rep. David Cicilline (D-R.I.), a prominent supporter of gun control and the author of several gun reform bills, thinks that’s wise. Everytown’s priorities are “less about the firearm and more about people’s access to the firearm,” he said. “I think we ought to start with those because I think there would be a lot of bipartisan support for them.”

And despite the GOP’s firmer grip on the Senate, Sen. Chris Murphy (D-Conn.), one of that chamber’s leading voices on gun reform, says he isn’t giving up hope. Tuesday’s results, he told me, might force Republicans to reevaluate their political calculus; he noted that the gun debate played an important role in the defeat of Republican Sen. Dean Heller in Nevada, where the deadliest mass shooting in US history took place last year. “Given that responsibility will be wholly on the Senate, does he want his members to own the failure of the background check bill—especially after the only Senate Republican incumbent who lost, lost in part due to his opposition to gun safety measures?” Murphy says.

Peter Ambler, the executive vice president of Giffords—the gun safety organization founded by former Arizona Congresswoman Gabrielle Giffords after she survived a mass shooting—acknowledges it will be tough to actually pass gun laws with Republicans running the Senate. Even so, having House members cast votes on the issue—something they haven’t done since the Sandy Hook shooting—will be a useful tool for future election cycles as the gun control movement seeks to unseat anti-gun-control lawmakers. “Think about what the Republicans did—they tried to repeal Obamacare,” says Ambler, noting that GOP votes to undo the health care law turned out to be major liabilities during the campaign. “It’s important to have a record in the House.”

But 2020 isn’t the only leverage that gun control advocates believe they have. A spokesperson for Everytown says the group plans to channel its 5 million volunteers, who knocked on doors and phone banked for candidates, into a grassroots lobbying effort to pressure lawmakers into taking action.