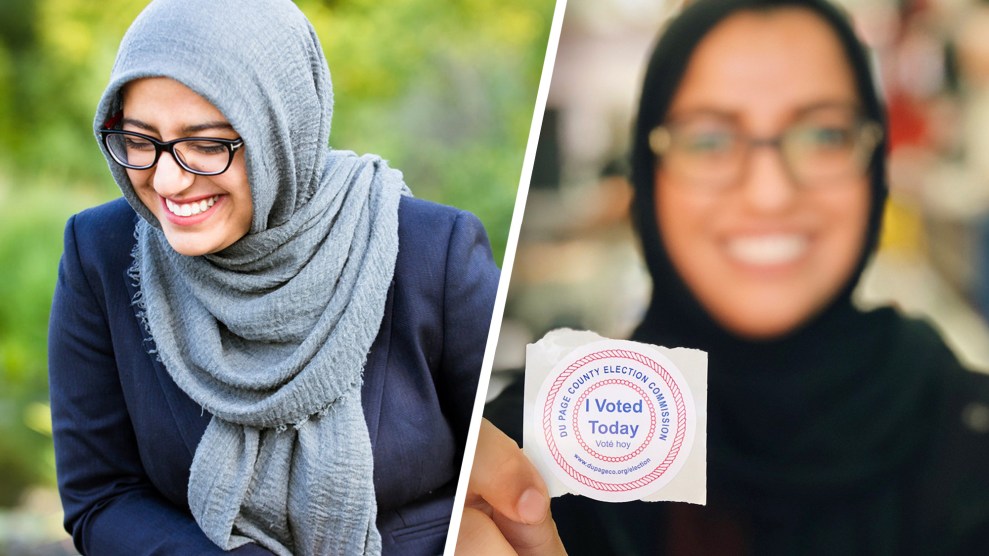 Hadiya Afzal is just one of the unprecedented number of people between the ages of 14 and 35 running for political office this election season, according to the progressive group, Run For Something.

The 19-year-old Pakistani-American is vying for a spot on the District 4 County Board in DuPage, Illinois, where she hopes to bring her unique perspectives of gender, immigrant experience—her parents immigrated from Pakistan—and youth to a swath of suburbs west of Chicago, areas characterized by picturesque small towns and a growing opioid crisis.

Too young to vote in 2016, she quickly became an activist, outraged by Trump’s anti-Muslim rhetoric. “My parents are both immigrants to Pakistan and they were like, ‘No we’re not gonna let this guy drive us out of our own country,’” says Afzal. “And I vowed to fight. I never want to give Trump credit for anything I do, and so I try to think of myself as more motivated by just how close Hillary Clinton came to breaking that highest and hardest glass ceiling.” So, after a stint as an intern, learning the ropes at the DuPage County Democratic Party, she decided to move to the next level and run for office.

As she looked at the options, she was struck by the makeup of her county’s 18-person board: dominated by white male Republicans, there was just one Democrat, four women, and no people of color. This was in stark contrast to the decade-long shift in the demographics of the district with its large immigrant population.

“I grew up in my district. I went through the public school system in my area. I’ve had friends who have had a lot of rehab for drug addictions. I’ve had classmates who’ve died of overdoses,” Afzal told the Mother Jones Podcast, for this week’s special feature on first-time voters across the country. “I know people who commute to our local community college and are stuck in traffic for hours.”

It’s Wednesday! We have another brand new episode of the Mother Jones Podcast to devour. On the final podcast before the midterms, we talk to you, our listeners, about this crazy-important election, including a first-time candidate, who just so happens to be 19, and a full time college student. #midterms #podcast #news #politics

It hasn’t been all smooth sailing for the young candidate. From ageism to fundraising, Afzal—who is Muslim and wears a hijab—says she’s faced challenges on the campaign trail. “We are knocking doors of every single party background: Democrat, Republican, Independent, everywhere in between. And so, of course, we’ve gotten some doors slammed in our face,” she said. “But I think it’s difficult sometimes to really be super-racist to someone’s face when they’re knocking on your door and asking you: ‘What’s your problem? How can I help you.’”

One of her political heroes has noticed her efforts:

Congratulations to @hadiyafordupage for her endorsement by Hillary Rodham Clinton! pic.twitter.com/fAP7gOGVe6

Outside of campaigning, Afzal is a full-time student at DuPaul University, majoring in political science. Because she’s not a professional politician, she considers herself to be a better candidate.

“People often tell us college students that we’ll be saddled with debt for decades, that there are few job opportunities for college graduates, and that there’s less hope for our generation than any other before us,” Afzal said in her first campaign video. “But I believe that building a dynamic future is within our generation’s power.”

Afzal’s biggest canvassing success to date, she told MoJo host Jamilah King, was a surprise conversion with a Republican voter while she was knocking on doors in her district. For 30 minutes, the two of them stood outside of his house talking, while his dog slept at their feet. They disagreed on almost every topic: pensions, immigration, and the Trump administration, she says, but by the end of it, the man asked her a key question: “Do you promise to go into the county board and just shake things up and not take no for an answer and change the way things are going?”

When she replied, “That’s the only reason I’m doing this,” he gave her a surprising response. “Well,” he said, “you have my support.”

Listen to the full interview on this week’s edition of the Mother Jones Podcast, where she appears alongside James Mayville and Steve Rapport, who may not be running for office but are also first-time voters.