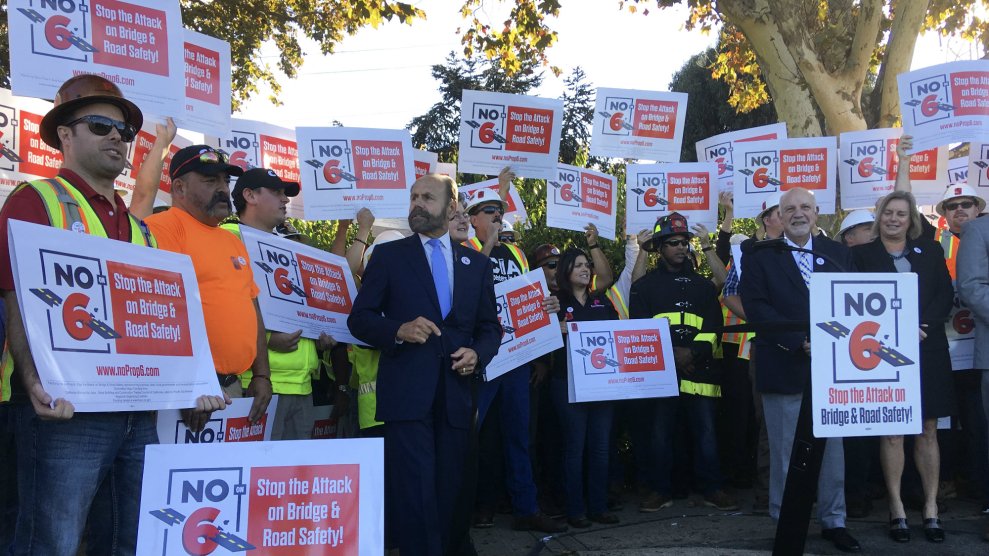 Protesters in Palo Alto rally and hold signs on behalf of a campaign against Proposition 6.Janie Har/Associated Press

This year on Calfornia’s packed ballot, voters will decide on a contentious initiative that would overturn recent state legislation that raised taxes on gasoline to fund needed road and transit projects.

That repeal effort, Proposition 6, is backed by around $5 million from the California Republican Party, Republican gubernatorial candidate John Cox and other GOP hopefuls with some faith that rousing opposition to the gas tax could be a lightning rod issue that will drive constituents to the polls.

Here’s what you need to know about the repeal effort, even if you’re not a Californian.

What does the gas tax do?

Last year, California Gov. Jerry Brown signed legislation that increased the state’s gasoline taxes for the first time in decades. His signature added 12 cents to the 28-cents-per-gallon excise tax on gasoline and 20 cents to the diesel tax over the course of 10 years. That’s on top of the 18 cents per gallon paid in federal taxes.

The money is being used to fund a $52 billion repair plan to improve the state’s infrastructure. Most of it it will go to road rehabilitation projects with the goal of bringing at least 98 percent of state highway pavement into good or fair condition. Currently, the state is grappling with a $130 billion backlog of road and bridge repairs.

About a quarter of the money is slated for other projects, including improvements to public transportation systems and reducing traffic in the most congested areas.

Prior to the new tax, California ranked seventh in the nation in gas tax costs. An analysis by Politifact found that, unless Prop. 6 passes, it ranks second highest, just behind Pennsylvania and ahead of Washington and Hawaii.

Brown’s administration says the average motorist in California should expect gas cost increases of about $10 a month, or about $120 a year. However, an in-depth analysis by The Sacramento Bee found it could be closer to a range of $153 to $215.

Despite paying the tax, Californians can expect to save money.

Research published in recent months by TRIP, a nonpartisan, nonprofit transportation research group based in Washington, DC, does a nice job of breaking down how those costs add up in California.

“Due to inadequate state and local funding,” the group wrote in an August report, “68 percent of major roads and highways in California are in poor or mediocre condition costing the average state driver an extra $843 annually in additional vehicle operating costs as a result of driving on rough roads.”

But nationally, the group reported in October, with about half the roads in as poor a condition as California’s, the average motorist is losing $599 annually—a total of $130 billion nationally—as a result of driving on bad roads. That’s $244 less than the average Californian is paying.

So, even if California is only able to get road conditions on par with the national average, the average driver paying the expected $120 in additional state gas taxes will likely have a net savings of roughly that same amount.

So why are Republicans pushing to overturn it?

Republicans are against raising taxes and argue that the money for the road projects could be paid with other money in the state’s coffers if it reworked its budget.

But what may be more likely is that Republicans are convinced this issue will drive GOP voters to the polls and help keep GOP lawmakers in office.

“Clearly, Paul Ryan, McCarthy, Nunes have all poured various amounts of money into supporting Prop. 6, so they believe that, in general, it’s a way of getting out the Republican vote,” Gersten said, though he’s skeptical that their effort will pay off. Those lawmakers might be, too: In the final run-up to the Nov. 6 elections, Gersten noted, Republicans have stopped pumping money into the Proposition 6 campaign.

The gas tax has also been one of the prominent themes on campaign signage this election cycle, reporters covering the races have noted.

Sanctuary state and gas tax themes prominent on several campaign signs this weekend. Many state party activists hanging on the hope these two issues will mobilize GOP voters in November, even though sanctuary state policy not likely to be on ballot. pic.twitter.com/kAqXKGTUKe

There’s some hope this could be an effective strategy because …

A good chunk of Californians oppose the gas tax.

It remains to be seen how much this issue will drive voters to the polls, but the Public Policy Institute of California found in September that 52 percent of likely voters oppose Proposition 6, despite evidence it could cost them money. That’s an especially slim majority for such a blue state.

On the flip side, the survey found that 39 percent of voters—including 50 percent of Republicans and 33 percent of Democrats—plan to vote in favor of the repeal, while 8 percent remain undecided.

That’s put some Democratic candidates in competitive congressional races in a tight spot.

A number of Democratic candidates in key congressional races have broken from the Democrat majority on the issue and come out in favor of Proposition 6, likely in their own effort to appeal to voters.

They include Katie Porter of Irvine, Josh Harder of Turlock, Jessica Morse of Pollock Pines, Ammar Campa-Najjar of east San Diego County and Andrew Janz in the San Joaquin Valley.

The issue has emerged most strongly in Porter’s Orange County district race against GOP Rep. Mimi Walters, who accused her opponent of flip-flopping on the issue in an attack ad. A PAC affiliated with Paul Ryan paid a reported $550,000 to $750,000 for Walters to run the ad.

Other Democrats have brushed off the issue. Katie Hill, a Democrat facing Rep. Steve Knight in northern Los Angeles County, was disparaged in a similar attack ad from the same PAC. But when asked about the tax during a September debate, she sidestepped.

“I don’t know what ideas they’re referring to, but I think the fact that I’m being attacked on gas, on a state legislative issue, shows you there’s not a whole lot to be attacking,” she said.

Hill did not return HuffPost‘s request for clarity on her stance.

But how likely is it that this issue would sway people’s votes?

Gerston isn’t sure the Republican spending on Prop. 6 will have a great return on investment.

“Clearly, Republicans spent a lot of money on Proposition 6, relatively speaking, but it’s uncertain to me if they’ll get much more of a payoff than they would have gotten otherwise,” he said.

“California has become such an incredibly blue state that we’re now looking at Republicans only in terms of pockets,” he continued. “So, yes, in certain pockets of eastern Los Angeles County and Orange County and maybe northeast San Diego County, you may see a larger Republican turnout than we might have expected in the rest of the state, but in those cases, most of it will have to do with retaining Republican members of Congress or keeping seats from going to the Democrats.”